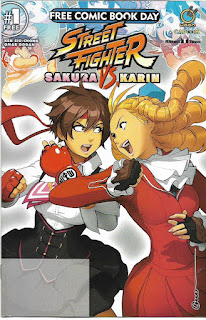 Street Fighter: Sakura Vs. Karin #1 [Udon Entertainment/Capcom] presents a 20-page story of two young women battling each other via a video game and then physical combat. It’s tied into some video game, but it has lively characters and “fight” scenes. There is a sub-plot involving one of the young ladies trying to prove herself to her father and an ending which was doubtless hilarious to those who know the game and such.

QUALITY: Good. This isn’t a comic book I would seek out again, but I think those who enjoy the combination of comics and video games will find it entertaining.

ACCESSIBILITY: Okay. I could follow the story, but I never felt I had a firm grasp on its world.

SALESMANSHIP: Decent. While there’s no information on where to find more Sakura/Karin adventures, there are several pages of house ads for other Street Fighter and Udon comic books. 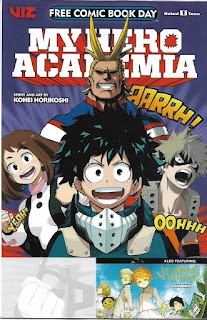 My Hero Academia [Viz Media] features two stories. The first story is an excerpt from My Hero Academia Volume 14 by Kohei Horikoshi. It is set in a world where 80% of the human population has super-powers and those who would be heroes go to a special school where they can learn to use their powers. The second story presents the opening of The Promised Neverland by Kaiu Shirai (story) and Posuka Demizu. That one involves a mysterious orphanage that seemingly treats its young charges well, but which also seems to have a dark side.

QUALITY: The My Hero Academia excerpt is little more than a yawn-inducing fight scene with a tiny dollop of characterization. The Promised Neverland excerpt is better written and drawn with a nice build to its mystery. I’d be far more likely to follow this manga series over the other one.

ACCESSIBILITY: Okay. There’s a house ad between the two stories in which some vital information is provided.

SALESMANSHIP: Good. Readers are directed to where they can follow the two series showcase in this issue. There is also a back cover house ad that includes four other series. 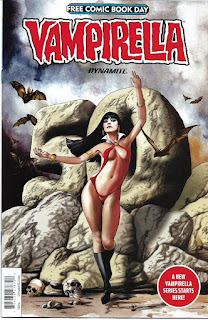 Vampirella Vol. 5 Issue #0 [Dynamite] opens with several pages of a new Vampirella series written by Christopher Priest with art by  Ergun Gunduz. The second story is a Vampirella reprint from 1993, written by Kurt Busiek and drawn by Arthur Adams.

QUALITY: As I’ve tried to explain in the past, sometimes, though I recognize the quality of writing and art, the story itself doesn’t do anything for me. That’s the case with the first Vampirella tale in the issue. As for the reprint, well, Busiek wasn’t at his best here and the art made the characters look like they were all five feet tall tops. It just didn’t work for me.

ACCESSIBILITY: I felt lost while reading the first story. I needed more information to get into that world. I could follow the second story much better.

SALESMANSHIP: Excellent. Lots of house ads for Vampirella and Red Sonja projects. I’m trying to catch up on Red Sonja, but, much as I like the character, there are so many books. From time to time,
I feel the same way about Vampirella, but I’ve yet to read a modern Vampirella story that hooks me. 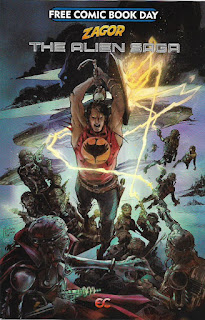 Zagor the Alien Saga [Epicenter Comics] features a 30-page excerpt from the full graphic novel of that name. Zagor is a character I’ve only recently discovered; he is an adventure hero in the mold of Tarzan whose adventures - crime, horror, science fiction are set in the western world in the first half of the 19th century. Written by Guida Nolitta and drawn by Gallieno Ferri, this particular graphic album involves invaders from outer space who have allied themselves with Zagor’s deadliest and most persistent enemy.

QUALITY: First-rate. The writing, the characters, the situations, the art are all terrific.

ACCESSIBILITY: Also first-rate. Between the inside front cover and the story itself, a new reader will learn everything they need to enjoy this excerpt.

SALESMANSHIP: Readers are directed to the full graphic novel at the end of the excerpt. A back cover ad shows the covers and titles of all available Zagor graphic albums. 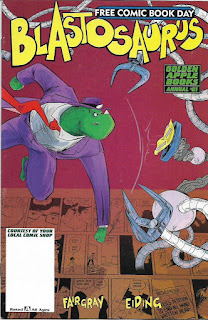 Blastosaurus Annual #1 [Golden Apple Books] has a trio of connected stories about an evil-fighting dinosaur who wears a suit and tie. His origins are unknown. These crazy, incredibly entertaining tales are written by Richard Fairgray and Paul Eiding with lively art by Fairgray. I loved them.

QUALITY: I probably gave it away in the above paragraph, but these 22 pages of stories have top-notch writing and art.

ACCESSIBILITY: I was able to get into these stories and their world with no difficulty whatsoever.

SALESMANSHIP: There’s a front cover editorial that defines Golden Apple Books’ mission statements. There are house ads directing the reader to more Blastosaurus and to Adventure Van, a second series from Fairgray and this publisher.

Posted by Tony Isabella at 9:19 AM