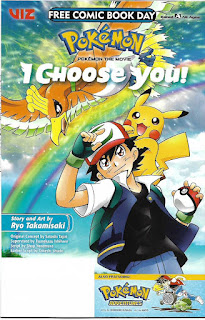 I score FCBD offerings on a scale of zero to ten. Each category is worth three points with the tenth point coming from my interest in seeing more of what’s ever in the book.
Pokemon the Movie: I Choose You! [Viz] has a 16-page excerpt by Ryo Takamisaki from the title feature and a 14-page Pokemon Adventures by Hidenori Kusaka (story) and Mato (art). The latter seems to be based on the Pokemon video games.

QUALITY: I thought both of these stories were very entertaining. I have a minor quibble in that the first read like it was missing an introductory page or two, but I enjoyed both excerpts.

ACCESSIBILITY: If I had no trouble following the action - I didn’t - then getting into this material should be a breeze for all those young readers who are already Pokemon masters.

SALESMANSHIP: Decent. Editorial material directs readers to where they can find more of these features. 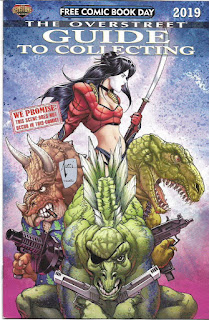 The Overstreet Guide to Collecting [Gemstone Publishing] isn’t the standard Free Comic Book Day offering. While it does have 16 pages of comic-book content by writer J.C. Vaughn and artists Brendon and Brian Fraim, those pages aren’t a story. They are a tutorial into comics collecting. In addition to the comics, the issue has a nice tribute to Stan Lee and short prose articles on the Overstreet Hall of Fame and collecting comics by their creators.

QUALITY: The comics material is great fun, though, in exploring the diversity of the current industry, it ignored comics that weren’t adventure-oriented.

ACCESSIBILITY: Decent, but I can’t let it pass that it ignored the vastness of the comics industry. 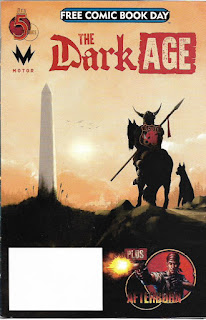 The Dark Age [Red 5 Comics/Motor] features a 16-page excerpt from the title feature and an 8-page excerpt from Afterburn. The former is set in a near-future world where all metal has been reduced to  “worthless piles of rust and dust.” Afterburn is set in a different near-future world where a solar flare has wiped out most of Europe, Africa and Asia.

ACCESSIBILITY: Decent, but not to the extent I that I think these Free Comic Book Day issues need to be.

SALESMANSHIP: Meh. While there are house ads for the two features, they simply don’t excite. 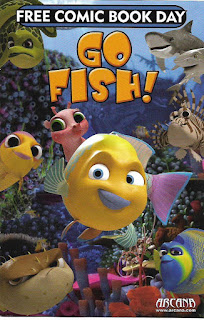 Go Fish! [Arcana] has a 19-page prequel to an animated film that,  near as I can determine, was never made. It also has four pages of related material of an educational nature and several ads for other Arcana product.

QUALITY: Disappointing. The prequel material is heavily inspired by Finding Nemo and is neither as exciting or witty as that animated film. The prequel ends abruptly in an unsatisfying manner. However, I did like the educational pages.

ACCESSIBILITY: Good. I had no trouble following the story.

SALESMANSHIP: So-so. Nowhere in this issue are readers directed to any comics continuation of the story, just to the animated feature that hasn’t been made yet. (Though an editorial does say that Mark Hamill and Megan Edwards are involved. The six house ads for other comics give no more than the titles and what I assume are covers to those titles. 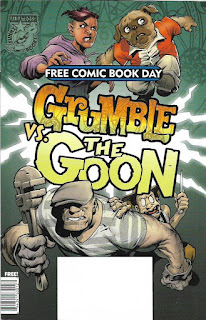 QUALITY: These are well-written and well-drawn tales with humorous action and monster mayhem. The stories aren’t to my taste, but I don’t deny their quality.

ACCESSIBILITY: Poor. I never felt I had a true understanding of the characters and their worlds.

SALESMANSHIP: Good. There’s a inside back cover ad that promotes a number of Albatross titles. 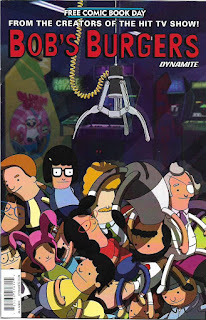 Bob’s Burgers [Dynamite] has three stories featuring the children of Bob and Linda Belcher. Created by Loren Bouchard, Bob’s Burgers has been renewed for its tenth season on Fox with a movie coming in 2020. The 27 pages of comics stories will likely entertain fans of the animated series. Me, I’ve never managed to watch an entire episode. Different strokes.

QUALITY: Each of the three stories has something going for it. An interesting premise. A witty line. A funny scene. But, overall, I was not taken by the characters or the writing. The first story had unpleasantly stiff art. The second story’s art was intriguing. The third story’s art was less stiff than the first’s. In scoring this category, I tried to look at this FCBD comic book from the view of a fan of the show.

ACCESSIBILITY: Poor. Readers who watch the show probably don’t need a leg up on getting into its world, but I never got a clear idea of who these characters were and what their deals were.

SALESMANSHIP: Very good. There were five house ads for this title and four other Dynamite titles. 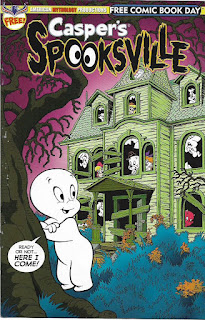 Casper’s Spooksville [American Mythology Productions] presents two new stories and two reprints, one of them a single-page gag strip. “Blow Off Some Scream” by Pat Shand and Eric Shanower finds Casper trying to console Spooky after the Tuff Little Ghost has a falling out with his girlfriend Poil. “The Big Switcharoo” by Mike Volker and Shanower deals with a body-swapping magical spell gone awry. “The Man From Mars” from 1953 is a sweetly humorous tales of Casper helping a sad kid. The one-pager makes no sense.

QUALITY: Shanower’s art is spot-on wonderful, but the writing could be better. It’s not bad. It just doesn’t have the spark I’d like to see in new Casper stories. The reprint story is fun.

ACCESSIBILITY: Solid. These characters are very well-known, so you don’t need a lot of explanation of their world.

Look for more Free Comic Book Day reviews to come. I have a little over a dozen remaining issues to read and review.