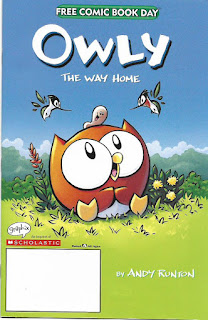 Welcome to yet another installment of my 2020's Free Comic Book Day reviews. My pals at Stormwatch Comics in West Berlin, New Jersey send me these FCBD comics so I can read and write about them in the bloggy thing. Only twice have I actually reached my goal of reading and writing about all the FCBD comics available in a given year. Maybe this time I’ll three-peat that achievement. I think I can do it, but it’ll take me until sometime in mid-2021 to complete this particular mission.

We start this time with Owly: The Way Home [Graphix/Scholastic], a truly exceptional FCBD issue. Written and drawn by Andy Runton, it features a 28-page excerpt from the graphic novel.

QUALITY: Superb. The phrase “Owly just wanted to help” appears a number of times in the opening pages. When he rescues a young worm from drowning, the story can’t help but give you feels. Runton is a gifted storyteller.

ACCESSIBILITY: Everything you need to know about Owly and his good character is in this excerpt. What I read made me want to get the full graphic novel.

SALESMANSHIP: Very good. The inside covers are house ads for other graphic novels for all ages. The back cover is a house ad for Owly: The Way Home.

SCORE: The full ten points out of a possible ten points. 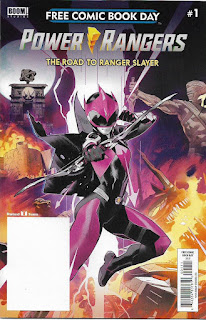 Power Rangers: The Road to Ranger Slayer [Boom! Studios) features a 24-page excerpt from what appears to be some alternate universe Power Rangers series. Full disclosure: though I am aware of Power Rangers, I don’t really know anything about the franchise beyond it being various Japanese TV series reworked into various American TV series. I’m pretty sure this was the first Power Rangers comic book I’ve ever read.

ACCESSIBILITY: Pretty much non-existent. I’m not even sure how the story segments go together. 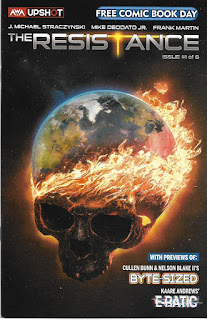 The Resistance [AWA] is a 48-page comic book containing the entire first issue of J. Michael Straczynski’s Resistence and previews of two other AWA comic books: Byte-Sized and Eratic. The title feature sets the stage for a shared universe with a global tragedy leaving the world in dire straits and with the emergence of super-powered beings. Byte-Sized is about sentient “toy” robots. Eratic is about a teen super-hero whose powers can only be used for ten minutes at a time. Resistance is drawn by Mile Deodato, Jr. Byte-Sized is by Cullen Bunn and Nelson Blake II. Eratic is by Kaare Andrews.

QUALITY: The Resistance is an smart, well-written and well-drawn story about a global pandemic, the political implications of that pandemic and the supers who emerge when the virus inexplicably goes dormant. The Byte-Sized preview doesn’t give me much of a taste of that series. The Eratic preview has just enough to win my interest.

ACCESSIBILITY: The Resistance story and the Eratic preview are 100% accessible to a new reader. Byte-Sized? Not so much.

SALESMANSHIP: Poor. AWA opted for more story pages over house ads. I can’t say that was a bad decision, but there were other pages I think could have been replaced with an ad for the company’s line-up of titles by top creators. 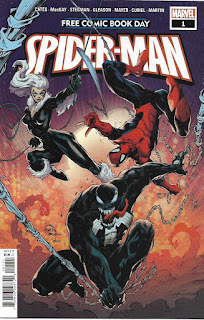 QUALITY: I thought the Spider-Man/Black Cat story was first-rate. It even has me thinking I should catch up on the Cat via whatever collections are available. The Venom story wasn’t nearly as good. Its saving grace is that it give me a leg up on understanding the never-ending Knull crossover event, mostly understanding that it’s nothing I’d be interested in.

ACCESSIBILITY: Very good. I found both stories accessible, though I’m not a newer Marvel reader would.

SALESMANSHIP: Good. There were six pages of house ads for a variety of Marvel Comics publications. 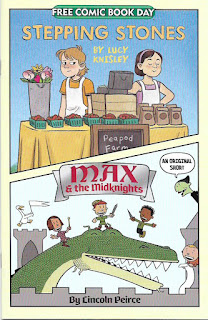 QUALITY: Both stories are well done. Stepping Stones is a 22-page excerpt from the graphic novel. Max & The Midknights is a four-page original story.

ACCESSIBILITY: The Stepping Stones excerpt needed more background to properly introduce the characters. The Max & The Midknights could have used another page. It’s easy enough to get into the stories, but it could have been easier.

SALESMANSHIP: Very good. Six pages of house ads for these and other books from the publisher.

That’s all for today. I’ll have more Free Comic Book Day reviews in the near future.