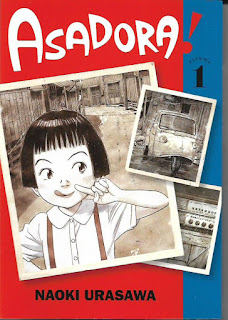 I’m not quite sure I understand Asadora! Vol. 1 by Naoki Urasawa [Viz Media; $14.95], but I’m definitely enjoying it. Urasawa is the creator/writer/artist of such landmark series as 20th Century Boys and Monster. The latter is a particular favorite of mine.

This first volume opens with what appears to be a kaiju attacking Tokyo in 2020, then goes back in time to 1959 to introduce a pair of unlikely heroes. Asa is a spunky young girl, the youngest in a family so large that it barely notices her. She is kidnapped by a World War II pilot who prided himself on always bringing his crew back alive. But he despairs of ever being a hero again. He’s fallen on tough times and, when she catches him stealing, he kidnaps her. His hope of collecting a ransom dies when he learns Asa’s family probably won’t even realizing she’s missing. That’s when something happens. Or maybe two somethings.

A massive storm hits the area. There might also be a giant monster doing some destruction. Asa and the pilot switch from adversaries to allies, trying to find her family and help people caught in the storm. The characters are well-written, including some fierce women who help the unlikely partners, and the art is simply magnificent. Urasawa did most of the backgrounds himself and they feel like you could reach out and touch them. Great stuff.

The English-language editions of Asadora! are being published on a quarterly schedule. The second is due any day now and the next two will be published this year. Highly recommended.

[Since I wrote the above review, I’ve read the second volume, which is even better than the first. We get a deeper understanding of Asa and the pilot, and the story jumps ahead several years with very intriguing consequences for the duo.] 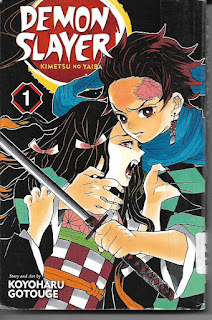 Demon Slayer: Kimetsu no Yaiba Volume 1 by Koyoharu Gotouger [Viz; $9.99] is a manga and anime series recommended to me. There are 23 volumes in the series - I haven’t checked out the anime yet - and I’m not sure if I have the staying power to stick with it until the end. Currently, my taste in manga does not run to battle manga or the supernatural, though Demon Slayer does have a human core I find interesting.

Tanjiro Kamado is a kindhearted kid from a struggling family. He works hard selling charcoal to help support them. While he’s away doing that, a demon kills his entire family. The only survivor is his young sister Nezuko, who has been turned into a demon herself. Tanjiro’s new driving force is to learn how to kill demons and find a way to cure his sister.

What I find most interesting about this series is the love between brother and sister. Even though she’s become a demon, Nezuko has a connection to her brother. Those who would train Tanjiro have some sense of this and do not slay her. Of course, it helps that Nezuko can apparently sleep for years at a time. It also puts what I find most interesting off to the sidelines while Tanjiro learns how to kill demons and commences killing them.

The writing and art are very good. The main characters are fairly well-defined. The training sequences don’t drag. The demon battles are well-paced. That this first volume ends on a cliffhanger with Tanjiro facing off against a monster that has already killed over a dozen of his teacher’s best students is one of the reasons I’ve already requested the second volume from my local library. Once I get further into the manga, I’ll check out the anime.

Manga fans will enjoy Demon Slayer. However, given how many books are in the series, I suggest getting them from your local library is at all possible. 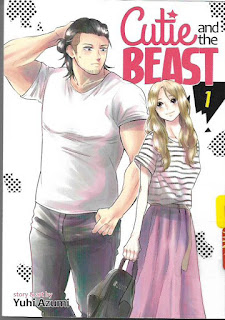 An old concern came to mind as I read Cutie and the Beast Volume 1 by Yuhi Azumi [Seven Seas Entertainment; $12.99]. Before I discuss that concern, here’s the back cover summary of the manga:

Most of her friends like pretty boys, but Momoka only has eyes for Kuga: a huge pro wrestler who plays a villainous heel on TV. But in real life, this tough guy has a softer side. Momoka's fan mail touches him in ways neither of them expected! In this lighthearted romantic comedy, a fangirl crush just might grow into something more.

What the summary leaves out is that Momoka, though 18 years old, is still in high school and Kuga is ten years her senior. While that isn’t as problematic an age difference as in other manga series I have read and enjoyed, it still disturbs me a bit. Especially since I’m developing a new super-hero universe in which the significant other of the lead hero is a third his age. I’ll be sending private messages to some women friends of mine to get reactions to what I have in mind. The age difference isn’t the whole thing going on in that relationship. But I digress.

Cutie and the Beast has a clever title, which is what lured me in. The writing and the art are excellent. Most characters are clearly defined in their dialogue and appearances. Momoka and Kuga are very likeable characters. I’m rooting for them and also looking forward to seeing how their relationship develops. The second volume of the series has been published with the third coming in July.

Cutie and the Beast Volume 1:

Cutie and the Beast Volume 2:

Keep watching the bloggy thing for more manga reviews. I’ll be back soon with more stuff.

Posted by Tony Isabella at 5:19 PM