WHAT I'VE BEEN WATCHING 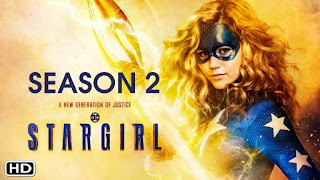 This is the latest in a series of bloggy things trying to justify how much time I spend watching movies and TV shows. I’m not sure if I’m convincing anyone that all that viewing is a necessary part of discussing popular culture, but, at least, I can claim my cable and streaming costs as business expenses.

We start today with some cancellations and concerns. Surprisingly, I find myself feeling unconnected from the Arrowverse with the end of Black Lightning. I decided to drop Legends of Tomorrow because just reading episode descriptions convinced me to drop the series. I dropped Batwoman because I had enough of heroes standing by while Alice tortures and murders people. Though I saw some promise in the first two episodes of Superman and Lois, I found I couldn’t muster any enthusiasm for the series. However, I’m looking forward to the return of Stargirl. I loved the first season and am still hopeful Geoff Johns will cast me as Al Pratt.

My interest in most scripted network dramas has also taken a nose-dive as well. Goodbye to Debris, Kung Fu, Law and Order: Organized Crime and Law and Order: SVU.

I’m dropping The Masked Singer because the endless parade of dumb gimmicks has become annoying. Also, as so many clueless people are refusing to receive the Covid-19 vaccines, thus reducing the chance of my country reaching herd immunity and returning to a semblance of normalcy, my dislike of anti-vaxxer Jenny McCarthy Wahlberg is greater every week. I despise this ignorant individual and grieve for those who have suffered illness or death because of her insane proclamations.

The show I’m concerned for is The Daily Show with Trevor Noah. The host needs to get back in the studio and the show needs more time with the correspondents. Noah’s new routine of bad impressions and multiple interviews has become boring. Except for Jaboukie Young- White, I find every correspondent funnier than Noah. I think Young-White is very talented, but his clueless young person sketches have become tiresome. He needs to grow beyond that niche.

The United States of Al gets better every week. When it started, I thought it would just be another “fish out of water” sitcom. Man, was I wrong about that. The quick summary:

A Marine combat veteran struggling to readjust from Afghanistan to civilian life in Ohio becomes friends with his unit's former interpreter, who is starting a new life in America.

With a cast headed by Adhir Kalyan (Al) and Parker Young (Riley), plus supporting cast Dean Norris (Riley’s dad Art) and Elizabeth Alderfer (Riley’s sister Lizzie), this series is a combination of  comedy and contemporary drama. It tells us about the over 17,000 interpreters living in danger in Afghanistan waiting to be allowed into the United States (as they were promised by our government). Their plight will only worsen when our military leaves the country to the merciless Taliban. The recent episode “Fundraiser/Baspana Towlawal” highlighted that desperate situation while also showing Riley’s heartbreaking inability to come to terms with his wartime experiences. That was an episode worthy of being nominated for and winning an Emmy award.

On a personal note, since the show is set in Ohio, I get a kick out of the many references to Ohio, the Ohio State University and the various Ohio sports team. I think Art must have t-shorts for every sports team in the state.

If you haven’t been watching The United States of Al, watch a few episodes. Consider this my high recommendation.

The Nevers [HBO Max] has been an intriguing series, which sometimes makes me wince. Created by the rightfully disgraced Joss Whedon - it’s disgusting when people one has admired reveal their vile true selves - the series is kinda sorta the X-Men in Victorian London. People, mostly women, have manifested powers and transformations. They are known as the Touched and, as one would expect, are feared and hated. Mostly by wealthy white men who will do what it takes to  stay on the top of their society.

The lead characters include the commanding and feisty Amelia True, who receives brief glimpses of the future, and her bestie  Penance Adair, a brilliant inventor. They live in a sanctuary set up by a wealthy benefactor and provide a haven for others who have been touched. There are allies and intrigues in the Nevers world, as well as enemies who bear them murderous ill will.

What makes me wince about The Nevers is the preponderance of brutal violence against women. It’s not necessarily out of place in that era and this situation, but I find myself wondering how much of it
is simple Whedon’s misogyny being expressed on the screen. I kept watching the series because it’s really good, because the acting is excellent and because I knew Whedon was removed from the series by the halfway mark of this initial season. I await keenly the second half of that season.

Despite my concern for The Daily Show with Trevor Noah, it seemed like the June 14 episode was made for me. The opening story was the latest DC Comics debacle: censoring an episode of the adults-only Harley Quinn animated series because of a scene in which the Batman performed oral sex on Catwoman.

DC’s reasoning: “Heroes don’t do that!”

Said no woman I have ever dated in my entire life.

I’m enjoying this latest mockery of DC Comics, whose decision has been said to be merchandise-based. At the same time, I understand the concerns of those long-time readers who object to super-heroes being shown in such adult situations while also being marketed to children. But that ship sailed a long time ago.

DC was okay with the Joker crippling Barbara Gordon in the forever vile The Killing Joke. When they turned that into an animated film, they were okay with Batman having sex with Barbara and getting her pregnant...and, of course, with the Joker crippling her and killing her baby. But that’s just one example of DC allowing all manner of brutality and perversity into their comics and media adaptations of their comments. The publisher is okay with unimaginable bloodshed and violence, but draw the line at two consenting adults having a little down under pleasure.

I offer DC my services as Vice-President in Charge of Keeping Them from Looking Stupid. I will want a corner office.

Getting back to the Daily Show, that night’s opening segment also had a Godzilla reference. Which was followed by Ronny Chieng’s very sharp takedown of an idiot writer who thinks the key to achieving a happier life is for victims of Donald Trump and other criminals  to forgive those who have wronged them, our country and the world. Hey, Poindexter, there can be no forgiveness without accountability and just punishment.

Noah’s guest was Kareem Abdul-Jabbar, one of the most interesting people on the planet. A legendary basketball player. A thoughtful writer. A social justice activist. It was a great interview and it made me wish Abdul-Jabbar had his own show.

Look for more movie and TV commentaries in the near-future. Thanks for stopping by. I’ll be back soon with more stuff.