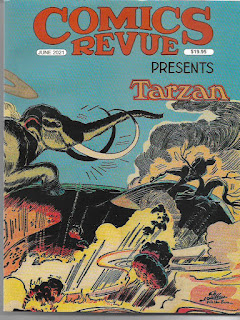 Some of my earliest comics writing was in black-and-white magazines like Marvel’s Dracula Lives!, Monsters Unleashed and Vampire Tales, and even that weird-but-cool little tabloid newspaper The Monster Times. What I remember most from the last one was that I only got paid when I went to their offices to ask for whatever payment they owed me. That got easier when I moved to New York City to work for Marvel Comics.

For the purposes of this bloggy, I am defining “comic magazine” as a magazine-format publication that contains mostly comics stories. So MAD would be a “yes” and The Monster Times, which only ran two or three pages of comics, would be a “no.”

Manuscript Press’ Comics Revue is my favorite comics magazine currently being published. Edited by Rick Norwood, each double-size issue presents over 125 pages of some of the greatest comic strips that have ever been seen in the United States. Issue #421-422 is the latest issue I’ve read and will suffice for this revue.

Tarzan by John Celardo and Dick van Buren is the cover feature of this issue. “The Inca Treasure,” a 12-page daily newspaper story from 1957, is a well-drawn adventure told in the once-classic style of captions with no speech balloons. Author Edgar Rice Burroughs’ Lord of the Jungle also appears in a more modern 1980 tale by Gil Kane and Archie Goodwin. In this case, the jungle is New York City with its magnificent bridges and skyscrapers.

My favorite story in the issue is 48-page Mandrake the Magician thrillers by Lee Falk and Phil Davis. From 1939, it’s a epic tale of royal intrigue and a hero’s fight for the woman he loves. I am frequently amazed at how often Falk (and the Phantom, his second classic creation) from sealing the matrimonial deal with the great loves of their lives. These romances went on for decades, multiple stories seemingly leading up to matrimony, only to have something delay them once again. What is truly remarkable is that, no matter often Falk did this, the result was always a terrific story.

As with any anthology, there are some features I like better than others. R&D Hackney’s medieval/contemporary satire Sir Bagby is a favorite of mine. Call me a heretic, but I have never warmed up to George Herriman’s Krazy Kat. But I enjoy almost everything else in the magazine: Casey Ruggles, Flash Gordon, Alley Oop, the Phantom, Gasoline Alley, Buz Sawyer, Garth and Steve Canyon.

Side note. This issue starts another of Milton Caniff’s flights of fancy in which a sleeping Steve Canyon imagines himself in another period of American history. This time, it’s the Revolutionary War or thereabouts. When I was a ghost-writer for a couple more recent newspaper strips, I pitched “Steve is sleeping” sequences for lead characters in those strips. Alas, my boss wasn’t interested. But, if I ever go back to ghosting newspaper strips like those, I will pitch such stories again.

Second side note. The main reason I’m not doing writing for syndicated strips, beyond John Lustig’s great Last Kiss feature, is because I couldn’t get credit for my work. I don’t expect to have my name on those tiny strips as they are currently presented, but I want to be able to let my fans and friends know what I’m doing. Something any potential clients should understand from the get-go.

Comics Revue is published every other month. A single issue costs $20. A subscription is $59 for one year. 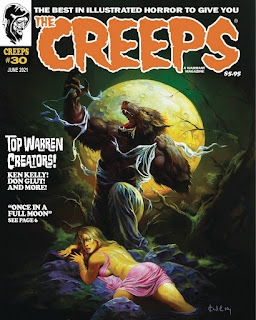 The Creeps (soon to end and replaced with a title called Shudder) and Vampiress Carmilla are two more recent comics magazine launches that I’ve been enjoying. From the Warrant Publishing Company, the black-and-white magazines are ongoing homages to similar magazines published by Warren Publishing in the 1960s through the 1980s more or less. Indeed, when The Creeps first came out I was a jerk to its editor, accusing the company of doing cheap knock-offs of the great magazines edited by Archie Goodwin and others. I didn’t get it back then. I do get it now.

If you’re expecting the kind of quality Archie Goodwin brought to Creepy and Eerie with legendary artists like Reed Crandell, Angelo Torres, Al Williamson and others, you won’t find that in Vampiress Carmilla and The Creeps/Shudder. What you’ll find are charming love letters to Creepy and Eerie and Vampirella with covers similar to the covers of those magazines. With mostly “shock ending” stories by veterans Don Glut and the late (and sorely missed) Nicola Cuti plus less well-known writers. With art by Benito Gallego, a favorite of mine from Apama the Undiscovered Animal, and several serviceable artists who occasionally reach greater heights. All wrapped around features that are likewise reminiscent of the old Warren magazines. I get warm nostalgic feels from these titles.

These magazines aren’t “the best in illustrated horror” as claimed by the blurb over The Creeps logo. They aren’t likely to win comics awards. But they are entertaining and fun and well worth the cover price of $5.95 per issue, less if you subscribe. As I’ve been doing for a couple years now. If you have fond memories of those Warren magazines, I think you’ll enjoy these as well. And I’m really, really sorry I was such a horse’s ass when I first laid eyes on them. 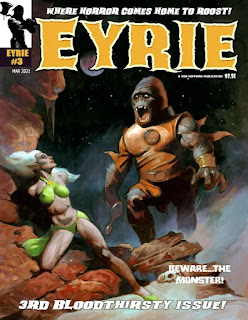 Less entertaining is Eyrie [$7.95 per issue] from writer and artist Mike Hoffman. Priced at two dollars more than the Warrant titles, it does have better paper. While I generally like Hoffman’s art, I haven’t been able to warm up to this magazine.

The stories aren’t as well-written as the ones in The Creeps. For the most part, the individual pages have very large panels. Which serve only to highlight the sparse plots. I realize that Eyrie is meant to be Hoffman’s personal creative expression, but I think it needs better writing and more variety in the art.

I gave Eyrie three issues, but don’t plan to buy any issues beyond those first three. Your mileage may vary and, for many of you, I’m sure it will, but the magazine isn’t working for me.

Since I first edited a bunch of Marvel’s black-and-white magazines back in the 1970s (and once turned down an offer from Jim Warren to leave Marvel and edit the actual Eerie for his company), I’ve grown increasingly fond of the format. If the opportunity ever arose, I would love to edit such a magazine again. I was pretty okay at it back then, but I’d be much better at it today.

I have come across some older black-and-white comics magazines and collections of British comics inspired by or reprinted from that country’s old weekly comics newspapers. So you’ll be seeing more of my comments and reviews of comics magazines in the hopefully near future.

Thanks for stopping by. I’ll be back soon with more stuff.