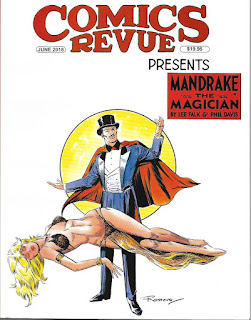 Comics Revue is an outstanding comics magazine and one of my own favorites. Edited by Rick Norwood, each bimonthly issues presents  128 pages of classic comics strips. The June 2018 issue [Manuscript Press; $19.95] is one of the best issues yet. From the incredible front cover by Romero, best known for his work on Modesty Blaise, to the hilarious Rick O’Shay Sunday strip by Stan Lynde on the back cover, this was a great issue of the great magazine.

First up was an earlier Mandrake the Magician story by creator Lee Falk and artist Phil Davis. “The Slave Traders of Tygandi” ran from July 20, 1936, to November 28, 1936. This exotic adventure is early in the relationship between Mandrake and Princess Narda. They are smitten with one another, but keeping coy about it. Mandrake comes to her land to help her addicted-to-gambling brother. Mandrake’s description of her is priceless:

Once thinking to protect her brother, she tried to poison me, drown me, knife me and slug me. A very remarkable girl!

In these earliest adventures, it always seemed to me that Mandrake had actual magic powers beyond his hypnosis. I like him best that way and, if I were ever to write him, that’s the tack I’d prefer to take. Hey, King Features, up for a revival?

There’s lots of other great stuff in this issue of Comics Revue. Complete stories of the gently satiric Sig Bagby by R & D Hackney,  Buz Sawyer by Roy Crane, and the Phantom by Falk and Wilson McCoy. Then there are the serials: Flash Gordon from both the 1960s and the 1970s; Casey Ruggles by Warren Tufts, Alley Oop by V.T. Hamlin, Steve Roper, Tarzan, Gasoline Alley, Steve Canyon, Krazy Kat, Rick O’Shay and, from Modesty Blaise creator Peter O’Donnell, the mighty adventurer known as Garth.

Single copies of Comics Revue are $20. One-year subscriptions are only $59. For more information, you can visit the Comics Revue page on Facebook or write Norwood at Manuscript Press, Box 336, Mountain Home, TN 37684. 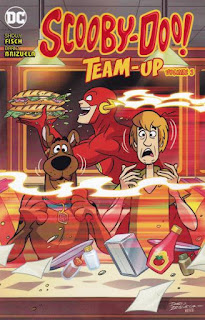 I have been getting the Scooby-Doo Team-Up trades via my library, which means I get them somewhat out of order. I read and reviewed Scooby-Doo Team-Up Volume 5 [DC Comics; $12.99] a couple weeks back for my “Tony’s Tips” column at Tales of Wonder. You can read that review here.

I just read Scooby-Doo Team-Up Volume 3 [DC Comics; $12.99], which is more DCU-centric than the fifth volume. Written by Sholly Fish with art by Dario Brizuela, this volume collects issues #13-18 of the monthly series with every story featuring characters from all across the DCU.

The Phantom Stranger and Deadman recruit the Scooby and the gang to help find the missing ghosts of the DCU. Included in the spectral victims are Kid Eternity, General Jeb Stuart of the Haunted Tank, The Grim Ghost (formerly known as the Gay Ghost), the Ghost Patrol and even one of my favorites: The Gentleman Ghost.

The remaining stories feature the Flash and a trip to Gorilla City, Aquaman, the Captain Marvel Family, Hawkman and Hawkwoman and - be still my fan heart - the Space Canine Patrol Agents. If, like me,  you know who the SCPA are, you’ll have as much fun with the story as I did. If you don’t know who they are, Google them. I’m not sure you’d believe me if I told you about them.

These are clever and fun comic-book stories. I haven’t seen super-hero comics this clever and this much fun since the long-ago days when E. Nelson Bridwell brought those qualities to Super Friends. Scooby-Doo Team-Up has become one of my favorite modern-day comics title. You should definitely give it a chance. 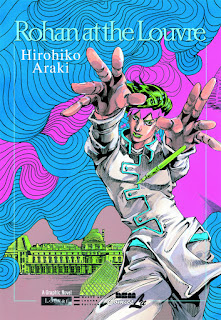 For several years now, NBM’s ComicsLit imprint has been publishing  an extraordinary series of original graphic novels in collaboration with the Louvre museum in Paris. The graphic novels are crafted by comics artists from around the world, each creating a story based on the museum and its many astonishing collections. Some of these stories are more fantastic than others.

Rohan at the Louvre by Hirohiko Araki [$19.99] is a horror tale by the creator of the bestselling manga JoJo's Bizarre Adventure. The graphic novels begins with Rohan working on a manga, his submission to a competition for young comics creators. He meets a mysterious woman who tells him of a cursed two-hundred-year-old painting that was made using the blackest ink ever known. The painter obtained the ink from a thousand-year-old tree and, for that affront, he was executed by the Emperor. The painting itself is saved by a curator of the Louvre.

A decade later, Rohan is a world-renowned mangaka and vacationing in Paris. He visits the Louvre to see the painting, only to find it is not on display. It is held in the deepest regions of the museum and has never been shown to the public. Because the painting is a mystery unto itself, the museum agrees to let Rohan and employees of the museum, including guards, to descend into the darkness and take a look at the painting. And so begins the horror.

Rohan at the Louvre is scary and stylish fare. Once the bad stuff started happening, I found it impossible to put down this graphic novel. Several days after reading it, I have deliciously unsettling memories of its key moments. Needless to say - because why should I be the only one thinking about that painting - I recommend this graphic novel to any comics reader who likes horror, manga and the unusual. You won’t be disappointed.

This coming week is an “odds and ends” week for me as I do my best to knock a bunch of tasks off my “to do” list. I’ll be working on a number of bloggy things during these next few days and, as they are completed, posting them here.

My next appearance will be at the NEO Comic Con on Sunday, August 19, at the Soccer Sportsplex, 31515 Lorain Avenue, North Olmsted, Ohio. I’ll post more information on that tomorrow.

Following that, I have a Vast Accumulation of Stuff garage sale on Friday, August 24, and Saturday, August 25. Despite my being listed as a guest for Wizard World Chicago that weekend, the good people at Wizard World and I aren’t able to make that happen. I’m looking forward to working with them in the very near future and will let you know when that happens. If you are going to that Chicago show, I know you’ll have a great time.