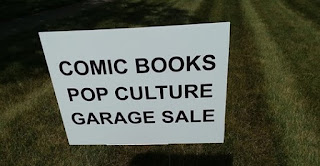 My last Vast Accumulation of Stuff garage sales will take place on Friday and Saturday, August 24-25, at the famous Isabella summer house, 840 Damon Drive, Medina, Ohio. It’s also the famous Isabella fall, winter and spring house. The hours for the sale will be 9 am to 1 pm on both dates.

If you’ve been to my garage sales this year, you know that I’ll be selling lots of comic books priced at just a dollar. These aren’t comic books left over from the comics boom and bust of the 1990s. These are recent comics and even some much older ones. Star Wars. Batman. Groo. Valiant. Marvel. DC. Simpsons. These were a big hit at last Sunday’s NEO Comic Con, so I’ll be adding a bunch of comic books to fill the boxes. You can also expect to find bargain-price magazines.

Kid-friendly comics and books will be displayed in a spinner rack. Though I also have some of them in the dollar boxes, I wanted to be sure any parent can quickly find material suitable for their child. As always, I caution parents that not every comic book is suitable for a younger reader, even some featuring classic characters like Batman. If they have questions about this, I’ll be happy to answer them and direct them to the kid-friendly issues.

I’m devoting a lot of space to hardcovers and trade paperbacks for this last garage sale of 2018. These are usually priced at 70% off their original prices. Sometimes it hurts when I sell some of these books, but such is the cost of downsizing.

We'll have some collectible character phones at $5. Spider-Man. The Simpsons. Mickey and Minnie Mouse. I might have even some phones priced at less than $5. Because I can.

I’ll have July 1963: A Pivotal Month in the Comic-Book Life of Tony Isabella on sale. I’ll also have replicas of the legendary “Green Books” that guided African-American travelers to safe hotels and restaurants across the nation.

I’m not sure how many I have left as I’m still searching for them in the Vast Accumulation of Stuff, but I’ll have some DC and Marvel and Stan Lee subscription boxes on sale. These will be priced at less than half of their original cost.

I’ll have at least a dozen of our popular $10 mystery boxes. Each box has well over $10 worth of comics, books, magazines, collector items and more. You’ll be amazed at what’s in them.

When I’m not adding up purchases - math is hard - I’ll be delighted to answer your questions about comics and my own work. I might even share some choice stories from my career. It’s kind of sort of like a comics convention in a garage. I hope to see you there.

Hey, and if you want to come to my garage sale in costume, I'm absolutely cool with that. I'll take your photo and you could end up in my blog. It's not exactly a "fame and fortune" opportunity, but think how confused my neighbors will be. On the other hand, they've known me for decades. Probably won't bat an eye.

Come back tomorrow and I’ll update you on my schedule for the rest of August and September.

Posted by Tony Isabella at 5:12 AM