EVERY CASE TAKEN FROM REAL LIFE 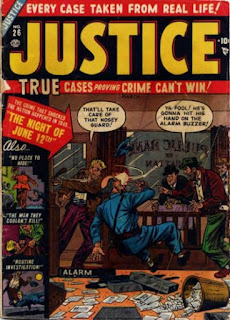 ﻿We’re back to kicking off these daily bloggy things with covers of
comic books that hit the newsstands in my birth month of December
1951.  Coming in at halfway through the title’s impressive 52-issue
run is Justice #26 [March 1952], a fairly typical crime comic book
from the publisher known as Timely and then Atlas and then Marvel.
The Grand Comics Database tentatively credits Christopher Rule as
the artist of the cover.

I haven’t read the issue, but I’m skeptical that any of the issue’s
five stories were actually taken from real life.  That was a common
claim crime comics made back in the day.  Also increasingly common
in vain attempt to still public disapproval of crime comics was the
cover’s other come-on:

The issue’s four comics stories are:

“No Place to Hide” (5 pages, art by Vernon Henkel)

The two-page text story is “Murderer's Oath!” None of this issue’s
writers have been identified at this time.

Justice ran from Fall 1947 to March 1955.  The last issue’s cover
has a large blurb proclaiming the comics is “respectfully dedicated
to the law enforcement officers throughout the nation without whose
self-sacrificing devotion to duty our society would fall prey to
the underworld.”  The focus of the title in its final issues was on
cops and not criminals.

We’ll have more comics from my birth month in future bloggy things.
Because I get a kick out of them.

My second garage sale of the summer was last Friday and Saturday,
July 26-27.  I set my goal for my first garage sale very high and
didn’t achieve it.  However, I did do as well as I had done in my
one and only garage sale of 2011, so I was happy.

This time, figuring there was only so much money I could extract
from the area comics community, I set my second garage sale goal at
half of what I made at the previous one.  I ended up making 65% of
what I made, so, again, I was happy.

Trade paperbacks continue to be the best selling item, but regular
comics are a close second.  Hardcover sales went well.  Manga sales
were dead, a disappointing result since, based on how well they’d
sold at the first sale of the summer, I had given them more display
space.  I’ll be rethinking that for my next sale.

My 1000 Comic Books You Must Read continues to sell at these sales.
I’ll have to reorder soon.

The addition of a new table and 14 more boxes of comics, trades,
and hardcovers was a popular move.  Almost every returning customer
expressed their delight with having more items to choose from and
with the price/quality of the material.

I restocked after the Friday sale and again after Saturday’s.  I’m
not sure how much more restocking I’ll do between now and the next
garage sale (August 10-11) as the boxes are fairly full. If I make
another trip to the Fortress of Storage, I likely won’t bring back
more than a half-dozen boxes of accumulated stuff.

For the next sale, I’ll have a few “mystery boxes” available at $20
each.  These will hold 200 comic books plus a selection of some of
the other items I’m selling.  I think this will be a fun addition
to the sales while helping me move quantities of accumulated stuff.

I don’t know how soon I can get them into the garage sales, but I
would like to offer my customers more Isabella-written items, some
higher-priced vintage comic books, and some mass market paperbacks.
Would that I had a bigger garage.

Sainted Wife Barb, our daughter Kelly, and our neighbor Giselle are
on vacation this week, leaving me to tackle my future reading room,
library and mailing station.  I’d been “mining” the room for garage
sale items, but hit a snag when I came across a bunch of games and
other items from when my kids were little.  In order to make space
for what I want to do and to continue my excavations, I must clear
out that stuff and the shelves that hold it.

The good news is that I think I can accomplish that before the gals
return home and maybe even lay down some flooring in the corner of
the room where I’ll be sorting/boxing the comics and books I’ll be
keeping for the time being.

One of my main goals for this summer’s garage sales was to have a
functional reading room/library/mailing station.  I think that’s in
reach.  Hoo-hah!

When I’m not working on the house and garage sales, I’m writing a
whole bunch of stuff.  Blogs.  Comics Buyer’s Guide columns.  Some
pitches for a publisher.  Some stuff for a client I can’t discuss
at this time.  Solitude is a writer’s friend.

With no one to stop me, I watched Ghost Rider: Spirit of Vengeance
and Nazis at the Center of the Earth in one evening.  Both were on
loan from my local library, so no money was wasted in this pursuit.
But I may never get back those lost brain cells.

I didn’t hate the first Ghost Rider movie and recognized something
of the Johnny Blaze I wrote in Nicolas Cage’s performance.  It was
an okay movie for the hour-and-a-half it cost me.

Ghost Rider: Spirit of Vengeance?  What a stinker!  I don’t believe
Cage or any other member of the cast left a single bit of scenery
unchewed in these tedious film.  The story and writing were so-so
at best.  The special effects became tiresome quickly.  If there’s
anything redeemable about the film, it’s that we learned the origin
of the demon possessing Johnny Blaze - it’s an angel corrupted by
the devil after falling in battle - and that, in that knowledge and
in the resolution of this movie, there might be another Ghost Rider
story worth telling.  Of course, I have no confidence the makers of
this film are capable of telling that story and less that Cage is
capable of delivering the performance it would require.

Nazis at the Center of the Earth was produced by The Asylum, that
odd-yet-prolific company that has released 100 films in a mere 15
years.  Many of those movies have shown up on the SyFy Channel and
I’ve written about them in past blogs.

Nazis has no name actors, no good actors and no compelling special
effects.  The plot - which is pretty much covered in the title - is
good pulpy fun, but it’s burdened with the bad acting, bad writing
and lots of gore for the sake of gore.  On the other hand, medical
and scientific torture was a Nazi fetish so its appearance here is
not unexpected.

If you can fast forward through the first half of the movie or so,
there is fun to be had.  That’s when the Nazis reveal their giant
robot with the living head of Hitler.

I’m not making that up.

The movie is tolerable fun once Robot Hitler makes his entrance.
I would never suggest one spend a dime on this movie, but, if you
can get it from your local library or otherwise see it for free, I
think you’ll get some giggles from Robot Hitler.

Robot Hitler would be a good name for a death metal band.