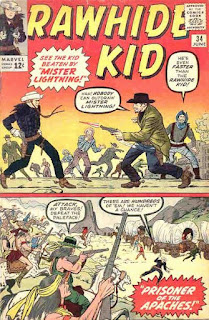 The cover is a split cover and both halves are exciting.  On top,
Rawhide has been out-drawn by “Mister Lightning” and, underneath
that scene, he’s facing a small army of Apaches to protect a wagon
train.  Two title blurbs, four word balloons, all that action...and
the cover doesn’t look at all crowded.  I miss the days when comic-
book covers told stories instead of presenting pin-ups.

“The Deadly Draw of Mister Lightning” (10 pages) is a plot-by-the-
numbers story.  It begins with the Kid fleeing a small posse; this
is the only time in the issue his outlaw status is mentioned.  He
hides out in the crowd at a traveling carnival where he watches the
fastest juggler in the world and reckons it’s good the performer is
not a gunfighter because no one could out-draw him.  Foreshadowing
in the days of the Old West.

Mister Lightning is dissatisfied with his meager earnings.  Another
carnival worker suggests he takes up gun play.  The juggler is swift
to master that art and becomes a gun-for-hire.  Spotting Rawhide in
a town where the Kid is apparently not wanted, Lightning calls him
out.  The Kid doesn’t want to engage in gun play for no reason and
that, along with his foe’s speed, allows the former juggler to out-
draw and wound our young hero.

Rawhide figures this is his lucky break.  Now that he’s no longer
the fastest gun around, he thinks people will leave him in peace.
Alas, building on his rep at the guy who outdrew the Rawhide Kid,
Lightning has turned to crime.  With only four pages to go, an old
Native American chief and friend of Rawhide tracks him down to tell
him of Lightning’s reign of terror.  The Kid figures he has to do
something about this.

Mister Lightning and the Kid face off at the bottom of page eight.
Lightning is still faster, but Rawhide’s steely-eyed courage makes
the juggler nervous.  He out-draws the Kid, but his shot misses by
a mile.  He fires a second time, but, this time, the Kid fires as
well and aims so expertly that the two bullets collide in mid-air.
Mister Lightning soils himself, at least that’s how I see it, and
vows never to use a gun again.  The local lawman takes the juggler
into custody and leads us out of the story with the mini-sermon of
the day:

“There are many ways to use a gun, but the Kid’s is best of all–-
not in anger, not for gain, just to help the cause of justice!”

Mutant gun skill is not new to the Rawhide Kid’s adventures, but I
think this example pushes it.  I’m fairly confident we saw this
amazing feat again in other Marvel westerns of the era.

An artistic note: Maybe it’s me, but the horse look pretty tiny in
the two Rawhide Kid stories.  Their human riders appear larger than
their steeds in some panels.  Was Davis rushed or was he reacting
to the low Marvel rates of this era?  Though his storytelling works
just fine and his facial expressions and figures are dramatic, the
small horses kept taking me out of the stories.

“Prisoner of the Apaches” (8 pages) is what the Rawhide Kid becomes
when a trigger-happy wagon master takes a shot at an Apache scout,
wounding the young brave.  When the Apaches capture the Kid and the
wagon master’s family, Rawhide takes the blame for the wounding of
the scout who, more bad luck, is the son of the chief.

The wagon master attempts to rescue Rawhide and the two of them are
soon surrounded by Apache warriors.  Their lives are spared because
the scout is recovering from his wound and because Apaches respect
courage.  The chief lets the Kid and the wagon master go in peace.
The Kid rides off to find others who need his help.

Sad to say, this is a weak Rawhide Kid story.  It could’ve starred
almost any western hero and, despite the dire circumstances the Kid
finds himself in, there’s little tension to the proceedings.  Lee
and Davis didn’t seem to click as a team and their collaborations
would end after one more issue.

Lee reunited with Kirby and inker Dick Ayers for “Man of the West”
(5 pages) and it’s a classic.  The story follows the life of Mark
Morgan, a drifter who builds a life, a house, a ranch, and a family
while facing and overcoming all the difficulties of frontier life.
There is tragedy in his tale, but, at the story’s end, Morgan has
triumphed over all obstacles and helped bring civilization to that
part of the Old West.  Which isn’t enough for him.

“I’m a frontiersman,” he tells his wife, “a pioneer!  I gotta be
making’ something out of nothing–-turning a wilderness into a place
to raise a family! But–-when it’s finished–-there’s nothing left!
I crave to be moving on–-to find me a new wilderness!”

The last panel shows the Morgan family moving on.

“And so our story ends as it began–-with Mark Morgan weary and
muscle-sore, making his way thru wild, untamed wilderness, seeking
a home just over the horizon!

“But this time there is a difference! This time, he has a wife and
a son–-and of such sturdy human thread was woven the fabric of the
glory of the West!”

Those closing lines give me chills.  Of course, they also make me
think of Blazing Saddles and Taggart’s (Slim Pickens) response to
a highfaluting comment by Hedley Lamarr (Harvey Korman):

“God darnit, Mr. Lamarr, you use your tongue prettier than a twenty
dollar whore.”

Seriously, the tale thrilled me so much when I read it as a reprint
in Two Gun Kid #75 [May 1965] that I actually wrote a pitch for a
series based on it.  It would have been a generational western saga
retelling the original story with more details and following Morgan
and his heirs into new frontiers and beyond.  If I ever come across
that pitch, I’ll run it in a future bloggy thing.

Come back next Wednesday for another “Rawhide Kid Wednesday” and
tomorrow for the usual more stuff.