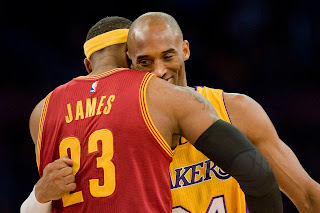 The news came out on Sunday. LeBron James has agreed to a four-year contract with the Los Angeles Lakers. For the second time in his career, the world’s greatest living basketball player is leaving the Cleveland Cavaliers. My emotions on his decision are not mixed in the slightest. I wish him all the best.

I watched James carry his team through the season, the playoffs and the finals against the insanely dominant Golden State Warriors. At times, it seemed he was a one-man team. I don’t mean to slight the other Cavaliers - though I guess I just have - but LeBron was the guy driving the team.

As a long-suffering Cleveland fan, I’m used to disappointment from our sports teams. That started when the Cleveland Indians traded my favorite player. My appreciation for Rocky Colavito was and remains such that I named characters after him in Black Lightning and The Grim Ghost. I expect I will continue doing that.

I was not surprised James decided to leave the Cavaliers. He wants to get a few more championship rings before his career is over and the odds of him being able to get them in Cleveland were becoming increasingly slim.

Beyond the basketball aspects of Lebron’s decision, I consider his growing media empire. In a sense he already has dual citizenship in both Cleveland/Akron and Los Angeles. The move will help him grow his empire further.

James announced this decision in a dignified manner. He expressed his love for his home town and left no doubt he still considers it home. He’ll continue to do great things for Akron and Cleveland in the years to come. He is a great man. Of that, I have not a single doubt. He has given much back to the community and he will continue to give much back to the community.

This time around, no one seems to be attacking James for moving on with his career in another city. He brought us a championship that will always be remembered as one of the great achievements in NBA history. He gave us his all for as long as he could. I’m delighted to see the Cleveland fans recognizing that.

If I have any regrets about James going to Los Angeles, it’s that I never got a chance to meet him or work with him. Knowing that he was something of a comics reader at one time in his life, I’d hoped that I would work on a comic-book project with him. Indeed, though I knew I couldn’t get it into Black Lightning: Cold Dead Hands, I had worked out a meeting between my creation and LeBron. I thought I would use that scene in an ongoing Black Lightning series. That seems pretty unlikely at the moment.

But life is full of surprises. LeBron James is in Los Angeles and I may be moving from comic books to create projects in other media. The only thing that wouldn’t surprise me in my life is that there will certainly to be many surprises in my life.

I am a LeBron James fan. I admire him and I am appreciative of his good works in our community. If I ever get the chance to work with him, I would jump at it. I mean, not as impressively as he can jump during a basketball game, but as impressively as my aging short and squat body can manage.

Hey, big guy. Have your people call mine. I’m kidding. I don’t have people. But I will answer the phone if you call.

Posted by Tony Isabella at 5:11 AM