TELL IT TO TONY 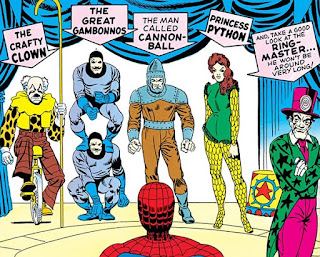 I suppose I should acknowledge Independence Day, but, to be honest, I’m not feeling it. What I’m feeling is that my country is about to fight a new war for independence against a traitorous president and his ignorant and/or soulless supporters. The Dumpster and his goons have already done so much damage to the nation that I fear I will not live to see the end of this new war. It will take generations to set the United States back on a proper course. Which is all I’ll have to say about this today.

I’m back after taking two weeks off to make my life a little less chaotic. If all goes according to plan - I hope I haven’t jinxed myself by using that phrase - I will be posting a new bloggy thing every day this month.

Today we have an e-mail from Dan Tandarich:

I was happy to open up the Ant-Man/Giant-Man Marvel Masterworks and see your introduction.  The behind the scenes tales and background info are among the best parts of the Masterworks collections. Other than the stories, of course. I have always liked Bill Foster and hoped something more would have been done with him.

I remember reading in an old Bullpen Bulletins that Ed Hannigan had a Bill Foster story ready for Marvel Premiere or a similar title. But it was never published.  I wrote to him some time ago and asked him about it, but he didn't remember anything about it.

I enjoyed reading about supporting characters like Talia Kruma.  I research the Avengers quite often and was happy to see that Mark Gruenwald originally had her down as one of the Avengers' Support Crew back when that was a thing, Sadly, not much ever came of that.  Although, as I was re-reading Operation: Galactic Storm from the early 1990s Avengers, Talia did turn up as one of the scientists studying the sun onboard Starcore. I thought that was a nice touch.

I wanted to let you know that your introduction was appreciated. I hope that there are more in the works!

One more thing. Did you ever write in your blog about the Circus of Crime proposal that you have mentioned in various places?  I would be so curious to read that one!

I’d be curious to (re)read that Circus of Crime proposal as well.  It hasn’t yet turned up in my Vast Accumulation of Stuff. When it does turn up, if it turns up, I’ll post it in the bloggy thing. In the meantime, let me give my memory a workout.

Two things you may already know about me if you’ve been reading my work for any length of time. I love goofy characters. I love a good redemption story. My pitch for CIRCUS SQUAD allowed me to address both of those.

What? You thought I was going to call the book THE CIRCUS OF CRIME? Yes, it’s catchier than my title, but I was turning these sad sack villains into heroes. Well, most of them.

I pitched this concept shortly after the Ringmaster and his Circus of Crime were soundly defeated by...Howard the Duck. In a criminal career of unending humiliation, I figured that loss had to shake the Circus more than all their other defeats.

In prison, the demoralized circus criminals were model prisoners. Enter a young warden who felt he could reform the Circus and turn them into useful members of society. He brought the band back together to perform at a event for the prisoners and their families.

During the countless days and weeks and months of rehearsals, there was a spark of romance between Princess Python and the warden. She had never met a man who saw the best in her. He’d never met a woman like her. They never crossed the boundaries necessitated by their circumstances, but their mutual feelings were obvious. So obvious the Ringmaster, who was not remotely ready to change his criminal ways, thought he could exploit it.

As for the other members of the Circus, they were actually enjoying doing the circus stuff without the crime stuff. It was better than getting their butts kicked by Spider-Man, Daredevil, Thor and any other hero whose path they crossed.

Come the big event. Due in no small part to the machinations of the Ringmaster, a massive prison break was planned to coincide with the performance. The guards and other security people would have to be more concerned with protecting the visitors than stopping convicts from escaping. The rest of the Circus had no idea what their boss had planned.

The performance. The prison break. The young warden is in jeopardy. Princess Python comes to his rescue and the rest of the Circus is right behind her. The warden has been straight with them and they aren’t about to let him come to harm. Heck, with the longing gazes they’ve seen between the Princess and the warden, they’ve come to think of him as part of the family.

In the aftermath, the Circus decide they like winning a whole lot better than losing...and attribute their victory to fighting on the right side for a change. They like this feeling.

Because of their heroism, the Circus are given a path to freedom. Under the guidance of the young warden, they will travel all around the country giving benefit performances at prisons and elsewhere. His own part in the attempted prison break remaining unknown, the Ringmaster would remain with the Circus, though he would always be secretly trying to return them to their former lives of crime. If the Circus continue to follow their new path, they will earn full pardons. They like that a lot.

Back when I first conceived this strange series, I figured that I could have a great time developing the Circus members. I could set stories all over the country. I could use guest-star super-heroes, including some who had fought the Circus of Crime. I could throw super-villains into the mix, some new, some old. I could even bring in a new member of the troupe from time to time, skilled inmates on their own paths to redemption and freedom.

In retrospect, if I were writing this series today, I would simple call it CIRCUS or THE CIRCUS. Realistically, with the circus being a fading entertainment in our present time, this book might be too hard to sell. Which is not to say I wouldn’t leap at the chance to give it a try.

In fact, I did sort of give it a try many years back. For a prose anthology called The Ultimate Super-Villains, Bob Ingersoll and I wrote a story which cast the Ringmaster into a very different light than he had ever been portrayed previously. That sadly-out-of-print tale remains a favorite of mine.

While some attempts to make the Ringmaster or his Circus of Crime more threatening have entertained me over the years, I prefer them as the semi-lovable band of losers they used to be. In some ways, they remind me of TV’s Legends of Tomorrow. You know those Legends are screw-ups, but it’s fun to watch them screw up and still save the day. I could envision THE CIRCUS having a similar vibe.

Getting back to Dan’s e-mail, I remain ready and able to write as many introductions as Marvel Collections Editor Cory Sedlmeier asks me to write. I enjoy writing them. Moreover, I believe the Marvel Universe and the universe in general would benefit from collections of Tigra, It! The Living Colossus and many other features that have not yet been collected.

That’s all for today, my bloggy friends. I’ll be back tomorrow with more stuff.

Posted by Tony Isabella at 8:36 AM