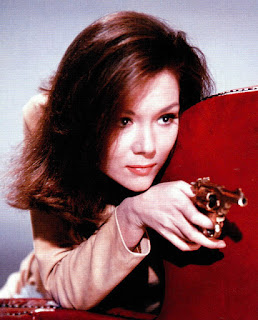 My planned “Coast to Coast with Marvel Comics” trip report is being pushed back a few days for reasons including a tight deadline on a short comic-book story, a plumbing problem at Casa Isabella, and a pothole-caused fall in a McDonald’s parking lot that left me with a twisted ankle, a bloody knee and various other cuts and bruises. Life throws stuff at you sometimes.

On the plus side, I came across folders containing pitches I made to Marvel Comics in the very early 1970s. These were written before I moved to New York to work for Marvel in 1972. Tomorrow, I’ll be sharing my pitch for the X-Men. Today, you get a pitch inspired by my teen crush on TV’s Emma Peel, peerlessly played by the wonderful Dinah Rigg in The Avengers. Let’s have a go at it...

This title follows the life of an American journalist in London as he battles the British edition of THE MAGGIA and other evil sorts with a beautiful ex-intelligence agent. TONY RAMOND has written a crushing expose of the British Maggia. MR. SALVADORE, the head man of this outfit, intends to stop publication of this book by killing Tony. However, the expose is a fraud through which the British police hope to draw Salvadore into making the error that will put him behind bars. Pursued by the Maggia and wounded by same, Tony takes refuge in the house of MRS. EMMA BRIGGS, retired intelligence agent and widow of another intelligence agent. Still a relatively young woman, Emma throws her lot in with Tony. Both have reasons to hate the Maggia. Her husband was killed by them and his girl died when a stray bullet from a Maggia bank job hit her. Tony will get his revenge in the first story. Emma’s will come at a much later issue in the series.

This series will alternate between clashes with the Maggia and bizarre espionage stories of the sort that appeared in the Avengers TV show. The relationship between Ramond and Briggs will be strictly platonic...until it isn’t. They each care deeply about the other’s welfare.

When I read the above for the first time in decades, a few things screamed out for further comment.

Even before I started my professional comics career, I was looking for ways to expand the kind of stories being explored in the Marvel comics I loved. Had I actually sold this series to Marvel, I would probably have featured the occasional super-hero or super-villain.

If I were pitching this today, Tony’s girlfriend wouldn’t have been killed by a stray bullet at a bank robbery. Quite frankly, I don’t think of bank robberies as being a mobster thing per se. Given my interest in including contemporary events in my comics stories, I could see his girl being a victim of human trafficking...and might not have had her killed. Tony trying to find and rescue her could offer some interesting story possibilities.

Finally, I am embarrassed to say, this is sort of the male version of a “Mary Sue” story in which a writer puts herself into the role of the female protagonist and acts her fantasies. It didn’t strike me at the time, but, yeah, Tony was my surrogate for the feelings Emma Peel stirred in me.

I’m amazed at how many of these Marvel pitches keep turning up as I rummage through my Vast Accumulation of Stuff. Come back on the morrow and I’ll share the X-Men pitch I wrote and sent to Marvel at the time in the 1960s when their title went from new stories to an all-reprint format.