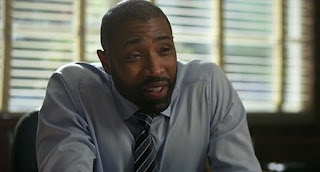 “Black Lightning Beat” is the ongoing blog-within-the-bloggy where I discuss all things Black Lightning. In yesterday’s installment, I wrote a scene-by-scene commentary on the first half of the Black Lightning Season Two premiere: “The Book of Consequences: Chapter One: The Rise of the Green Light Babies.”

Real-life political commentator Angela Rye is shown on a television broadcast talking about blacks being experimented since the days of slavery and since. She says the plight of the Green Light Babies is nothing new for black people. But...

...the more I learn about this stuff, the more horrifying it is to me. I went to all-white schools in Cleveland, which was a terribly segregated city when I was a kid. There was never a whiff of this in our history books. Indeed, given the control Texas conservatives have over our nation’s textbooks, I wonder if today’s kids are learning about this sad history.

Jefferson Pierce [Cress Williams] is watching the broadcast. Lynn Stewart [Christine Adams] walks into his bedroom. After their fight earlier, she had thought she would go to her own place. It didn’t seem like where she should be. They reconcile and talk things out. Both fear what could happen to their daughters if the government makes it open season on metahumans. It’s a fear that seems way too real in the Dumpster President’s America.

What also seems very real to me is Jeff and Lynn talking about the events of the day. Jeff tells Lynn Bill Henderson [Damon Gupton] knows he’s Black Lightning and that Anissa is Thunder. Lynn thinks maybe Jeff should see a therapist to help him deal with the stress of his life. That leads into sexy banter that, once again, is something to which I think most married couple can relate.  It’s a wonderful scene played by two outstanding actors.

Anissa [Nafessa Williams] comes home and stashes the cash from her attack on the drug house in her closet. It’s a short scene and I think it reflects her taking a moment to consider the consequences of what she has done. Her reflection will be short-lived.

Peter Gambi [James Remar] and Jeff have a conversation about Kara Fowdy [Skye Marshall], now revealed as a ASA spotter. Our hero is stunned by this news. He clearly had no idea that Fowdy had her own double life. There’s not much more Peter and he can do except wait to see if she can deliver the briefcase that was taken from Martin Proctor [Gregg Henry] during the previous season’s finale.

Another heart-sinking scene comes as we cut to Jennifer [China Anne McClain] hanging out with and getting her hair done by her friend Kiesha [Kyanna Simone Simpson]. Jen gets a text from Khalil [Jordan Calloway], but doesn’t respond. Kiesha starts talking about what a freak he is and, further, how all these Green Light babies are freaks. The hurt look on Jen’s face as Kiesha predicts the “end of days” was a punch to my gut.

The act ends on a humorous note. The masked Anissa interrupts a bible study at the church. When Reverend Jeremiah Holt [Clifton Powell] sees her, he and several other members of the congregation pull out guns. Though it’s a sad commentary on our reality, I have to admit the staging and timing made me laugh.

Anissa pours the money into the aisle and walks away. The reverend praises the Lord.

The next-to-final act starts at the funeral parlor where ASA agents are carrying away the late Issa Williams [Myles Truitt] in a body bag. His mother is screaming at them until Issa claws his way out of the bag. He’s alive, but his power has been activated. When his face/neck glows, people are compelled to reveal ugly truths.

Issa’s mom says this can’t be her boy, that she was happy to bury  him because she knew he was out on the streets doing Green Light. She recovers and apologizes, but the feds are ready to shoot Issa. The teen’s family interferes and Issa runs away.

At the Pierce house, Jen and Kiesha are watching the funeral parlor scene on Jen’s phone. Kiesha goes back into her “freaks” and “end of days” routine. Jen loses control of her powers, rushes into her bathroom and yells at Kiesha to go home.

Back at the Green Babies warehouse, Agent Odell [Bill Duke] is not the least bit happy that Lynn is now in charge of the youngsters. He wants to know who pulled the strings to get Lynn this position. She says the government experimented on these kids and she’s going to give the community the tools to deal with the situation. Odell clearly doesn’t like his authority being challenged. On the other hand, I do like seeing this Lynn/Odell conflict. You can guess who I’m rooting for.

Back at the Pierce home, Jefferson has returned home to find Lynn and Anissa outside the bathroom. When he enters the room, Jennifer is sitting in the rub surrounded by a virtual ball of electrical energy. She’s terrified. Jeff is terrified as well, but helping his child takes precedence. He helps her out of the tub and painfully absorbs her electrical energy. The melding of such intense emotion with the special effects is one of the best things about the show. Powers, like everything else in Freeland, have consequences.

That brings us the finale, which is incredibly fast paced. Writer Salim Akil blew me away with how much he could fit into just a few minutes of screen time.

School board member Napier Frank [Robert Townsend] tells Jefferson that the board has voted to close Garfield High. Jefferson offers to resign as principal. When Frank asks him if he’s sure, Jeff says it’s about saving Garfield and not his job.

Night has fallen. Issa sits in the basement. He looks so terribly alone that the moment breaks your heart.

Lynn is walking in the room where the Green Light babies are being kept in suspended animation. Without any dialogue, we still see the enormity of the task before her.

Anissa is packing another bag with money. She isn’t thinking ahead to the consequences of stealing from very bad people.

A sleeping Jennifer is floating above her bed with her electrical energy making her glow. She almost looks peaceful.

Then we get the final scene of the episode, the one that damn near made my heart stop. Fowdy confronts Tobias Whale [Marvin “Krondon” Jones III] in his penthouse. He’s ready for her. He tells her that Syonide was the last thing he loved in this world and then shoots Fowdy with a harpoon.

Fowdy screams in horror and pain. Tobias starts pulling her closer to him. She cuts the tether, slides on the floor past Tobias and launches herself out the window. Damn!

I’ve been praising the performance of Jones since the first time he appeared in the first season. My Tobias Whale is utterly ruthless, but Jones and the writers have given their Tobias much more range.
He is ruthless, but he was also capable of love. If there’s no one left to love, will he become even more dangerous?

This episode was a great way to start the second season of the best show on television. Now comes a question for you.

Would you like me to do a blow-by-blow commentary on every episode of Black Lightning? Three more episodes have aired since this first one, but I’m looking for an excuse to watch them a second time as well. Let me know how you feel about this.