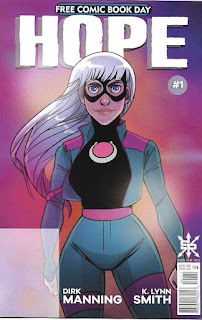 Hope by Dirk Manning and K. Lynn Smith [Source Point Press]. Dirk is a friend of mine; I wanted to state that up front because I am a full disclosure kind of reviewer. He normally writes horror comics. Here Dirk writes a 22-page story introducing his first super-hero creation.

QUALITY: This is one of the best of the Free Comic Book Day issues. While the story certainly touches upon the unease with which your average folks and average law enforcement agents react to supers in so many other comics, Dirk and K. Lynn have come up with some fresh takes on that basic situation. I liked it a lot.

ACCESSIBILITY: This is the first issue of an ongoing series. It has every thing a reader needs to know to get into and enjoy this first Hope tale.

SALESMANSHIP: Almost perfect. Dirk’s editorial talks about how Hope came to be. What the issue doesn’t do is tell us where we can find more Hope. Other house ads promote other comics; they are nice ads but a little more information would have been helpful. 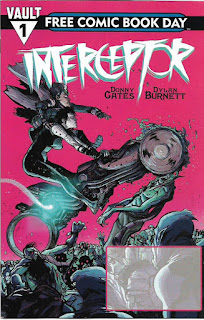 QUALITY: It’s a well-written story, albeit more than a little heavy with the plot background and the science explanations. We don’t get as much insight into the lead character as I’d have liked. The art was good.

ACCESSIBILITY: Mostly accessible, though the heaviness I mentioned above demands concentration and maybe Cliff Notes.

SALESMANSHIP: Good. It has a house ad for the Interceptor collected edition, followed by one for Reactor, which seems to continue the story from Interceptor. More coverage of other Vault Comics titles is lacking.

SCORE: Six out of the points. 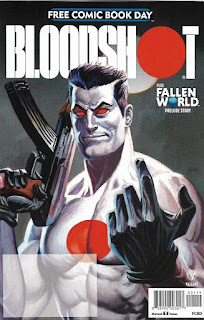 QUALITY: The Bloodshot story is terrific. The interviews are very informative. The Fallen World prelude is well-done, but, I’m not a huge fan of future versions of comics characters.

ACCESSIBILITY: I had no difficulties following these two stories. Valiant writing has always been very welcoming to new readers and these tales are no exception.

SALESMANSHIP: Good. There is no much story/interview content that there isn’t a lot of room for house ads. But there are some, one of them for what appears to be a Valiant Universe app.

SCORE: Nine out of ten. 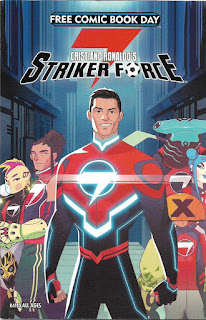 QUALITY: Despite the contrivance of Ronaldo’s super-powers deriving from his skill at kicking a ball-like power-sapping device, I was mightily entertained by this story. It was well-written with lively art and, most of all, it was big fun. I’ll be looking for it in the Previews catalog.

ACCESSIBILITY: I got right into the characters. Everything I needed  to know was in the writing and art. Well done.

SALESMANSHIP: The back cover had a photo of Ronaldo and his comics counterpart with a quote about why this project appeals to him. It may not be an ad per se, but it’s effective. 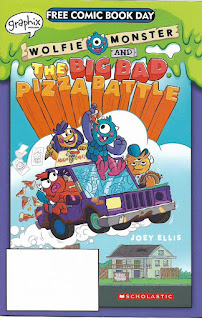 QUALITY: It’s a clever character and concept, but the execution is shaky. The plot meanders, the writing is so-so and the art, well, I found it uninteresting.

ACCESSIBILITY: If the story was more solid, the characters and the situations would have more clear and inviting.

SALESMANSHIP: Decent. The inside front and back covers have ads for other Scholastic graphic novels. The back cover has an ad for the Wolfie Monster graphic novel. 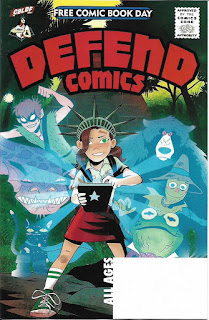 QUALITY: Mixed. A Fire Story is the best of the books excerpted in this anthology. Pilu is interesting and well-crafted. Apocalypse Taco is so-so. Nobody’s Fool is a graphic memoir I’ll read soon. Bags is intriguing, but I’m on the fence as to whether or not it’s any good.

ACCESSIBILITY: Also mixed. Apocalypse Taco is undecipherable. Bags is a little rough. The others are easy to get into.

SALESMANSHIP: So-so. There’s barely any information on the CBLDF, which I would think would have been the point of the Fund doing a Free Comic Book Day issue. It’s also not clear if these excerpts are excerpts - I assume they are - and nothing to indicate where an interested reader can find the rest of the stories.

More Free Comic Book Day reviews to come. I’ll return tomorrow with the lowdown on my next convention appearance. See you then.