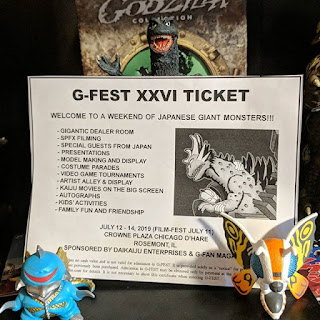 My son Eddie and I played hooky from G-Fest on Saturday, July 13, but attended the final day of the convention on Sunday.

Today’s G-Fest finale is less convention report and more personal  reflection. I had fun at G-Fest, but not as much fun as I could’ve had. I need to rethink the way I do this and other conventions so that I can enjoy them more and they take less out of me.

I was sick on the final day of G-Fest. It was a culmination of not always good choices I made. I fell behind on preparing my material for my “Cheesy Monsters Raid Again” presentation, not finishing my notes until Thursday morning, hours before we left for the event. I stressed over the presentation. I wasn’t as careful with my diet as I should have been; I need to eat less and more healthy. As much as I enjoyed going to Wrigley Field, it was a bad choice to do so in ninety-plus degree weather.

I was so sick Sunday morning that I skipped breakfast and stayed in my hotel room. I don’t think I emerged until noon. Between feeling poorly, which wasn’t helped by my anxiety that, in just a few more days, I’d be flying to the San Diego Comic-Con, and of what I had to do before I left, I realized (after check-out time) that Eddie and I should drive back to Medina on Sunday and not stay the night. As Eddie has a full schedule waiting for him at his job, he was on board with this plan. 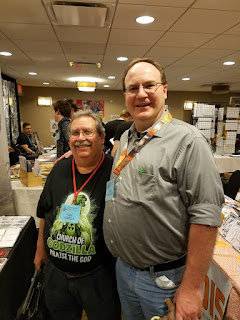 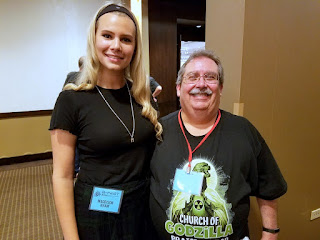 I didn’t spent as much time with friends as I could have at G-Fest. I did hang out a bit with Martin and Pam Arlt, Jennifer Otto-Lahr and her sons Conner and Jake, and some others. I barely said “hi” to JD Lees, the founder of G-Fest and G-Fan magazine. Likewise for Sue Matzke, who runs the kid-friendly Minya’s Place; Dave Nunes, the king of the dealers room and charity auction; and Tim Bean, whose work with the Japanese guests is indispensable. I did get to chat a bit with Dr. Eric J. Stoner, who sent me some funny screen caps from Reptilicus, and Alan Berckenhoff, who was assisting in the autograph sessions and who introduced me to his niece Maddison. She had no idea who I was, but kindly seemed impressed that Uncle Alan thought I was a big deal. 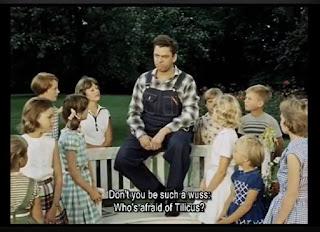 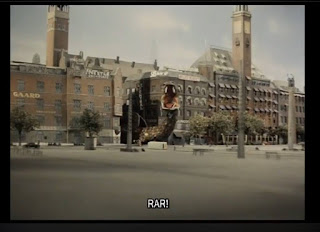 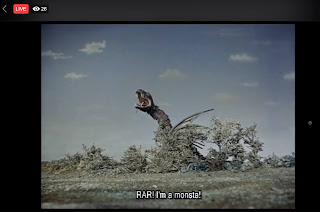 I barely attended any panels. Looking back over the schedule, I’m feeling sad about that. I have to plan my G-Fest days better.

I didn’t spent a great deal of time in the various exhibit rooms, though a highlight was visiting the Peekaboo Gallery’s showing of items from one of the finest Godzilla collections ever amassed in this country. This is the auction house (and publisher) who did the Vinyl Conflict: The World of Godzilla Toys hardcover I have praised recently. 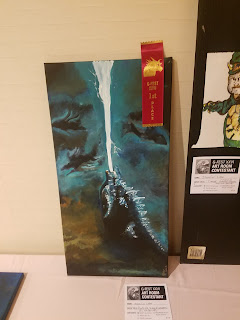 The art and model exhibit rooms were sensational, but I didn’t get to them until Sunday. By then, many models had been taken down by their creators. I was pleased to see my friend Jennifer Otto-Lahr won first place for her amazing Godzilla painting. I knew she was a terrific mom and cosplayer; I never realized she was also a great artist. Well done, my friend.

I didn’t attend any of the film festival showings. I did attempt to see The Great Buddha Arrival on Sunday, but I couldn’t handle the temperature in the viewing room. As I’ve mentioned in the earlier chapters of this G-Fest report, the hotel air conditioning system, outside of the individual hotel rooms and a few other convention rooms, wasn’t up to the challenge of the scorching temperatures on the outside.

Before any one accuses me of a “Poor Tony” column, let me repeat I made not good choices. When I return to G-Fest next year, I hope to make better choices.

I’ve already started work on next year’s “Kong Kin vs. Cheesezilla” presentation. I’ll be covering King Kong and Godzilla knock-offs in my usual humorously snarky style. I’ve already targeted some films I’ll start watching in a month or so. I also invite you to email me your suggestions. I hope to have my presentation finished a couple months before G-Fest.

Besides attending more panels, I think I’d like to be on a few more panels. I’m intimidated by the wealth of knowledge G-Fest panelists possess, but there may be some topics on which I might be able to hold my own. For example, I’m weary of those who claim the monsters are the only reason to watch these movies. The best Godzilla movies (and other kaiju films) are those that combine great monsters with great human stories. I’d love to be on a panel discussing all those great human stories.

Paramount will be to eat properly and regularly. I’ll try to curb stress by planning my activities better and maybe even grab a nap here and there. It works for me at home, so maybe it’ll work for me at conventions as well.

When Eddie and I checked out of the hotel, the Crowne Plaza did me a solid. I had expected to have to pay for Sunday night. Instead, they only charged me a late departure fee of fifty bucks. One more reason I love that hotel.

We said some goodbyes and attended a little of Stan Hyde’s popular “Kaiju Konfessions” karaoke presentation. Then we hit the road and drove back to Medina. We arrived around midnight.

G-Fest is one of my most favorite of all conventions. I’ll be back whenever I can, even if I’m also attending Comic-Con. I can sleep on the plane.

******************************
There’s a lot going on in my life right now, which is amazing since I’m not writing actual comic books at the moment. I will have more information on various events and projects soon. Keep watching the bloggy thing for news, views and reviews.