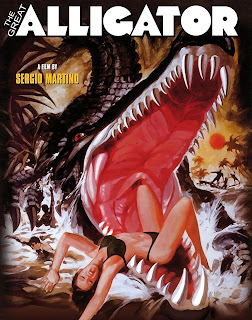 July saw me attending G-Fest XXVI in Chicago with my son, followed swiftly by my attending the San Diego Comic-Con with Saintly Wife Barb, my daughter Kelly, my goddaughter Vanessa and Lauren, Kelly’s housemate. So, as months ago, as long as I didn’t think about the blight on our society that is Donald Trump and the Republicans, I have to say July was a pretty good month. It was exhausting, but a pretty good month nonetheless.

Here are things that made me happy in June.

July 1: The Great Alligator (1979). This Italian monster movie is 90 minutes of cheesy mania. Lousy dubbing. A stiff giant alligator prop whose victims seem to push their way into its jaws. Released under so many different names it’s as if it were a fugitive on the run from the law. Gloriously terrible.

July 2: Vinyl Conflict: The World of Godzilla Toys. This catalog of the Mark Livolsi collection is a 300-page beautiful hardcover book from the Peekaboo Gallery. The collection goes on the auction block in August. It is magnificent.

July 3: Marvel Comics #1001. An annual-size comic featuring single-page stories by a multitude of creators. I wrote one for Kid Colt, Outlaw and it’s drawn by Tom Mandrake! Look for this special issue later this year.

July 4: Sharing food and watching fireworks last night with family and neighbors. Some of the latter will be leaving us soon, but we cherish the memories we’ve made with them.

July 5: Dell’s Adventures in Paradise [Four-Color #1301; February-April, 1962] with its absolutely wild story of a crazed professor determined to kill a shark god. It’s a keeper! 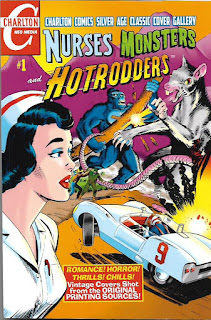 July 8: Bob Ingersoll’s The Law Is a Ass Volume One: All Rise, the first in a series of books reprinting the classic “comics and the law” column from Comics Buyer’s Guide.
July 9: Fantastic Four #10 ties in to whatever the heck “War of the Realms” is, but writer Dan Slott with artists Paco Medina and Kevin Libranda pulled off a done-in-one story that made Yancy Street come to life in wondrous fashion. Well done. 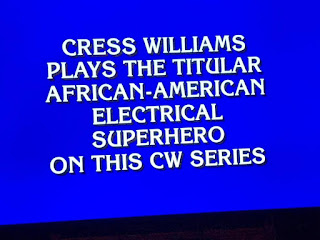 July 10: Black Lightning was the answer to a $2000 Double Jeopardy clue on last night’s program. How cool is that?

July 11: Friendly Neighborhood Spider-Man #6 has another memorable story in “Spider-Bite” by Tom Taylor with artist Juann Cabal. I’m a big fan of down-to-earth super-hero stories and wish the industry would do more of them.

July 13: Taking Saturday off from G-Fest. Ed and I went to Wrigley Field for a Cubs game. I love the fans and the stadium. Even in the unbearable heat. We watched the last three innings at one of the nearby bars.

July 14: Dinner with Alan and Pauline Weiss at a terrific Chicago restaurant with a street festival going on outside. Best non-dinner moment: watching a young woman write FUCK I.C.E. on the sidewalk. She knows who the bad guys are.

July 15: Martin Arlt was named to the G-Fest Hall of Fame for his many years of mind-boggling service in creating and scheduling the convention’s panel programming.

July 16: The rush of rushing around getting ready for the San Diego Comic-Con. My battle plan includes sleeping during our very early flights there. 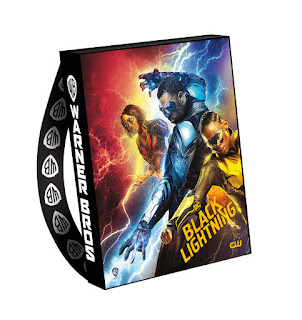 July 17: San Diego Comic-Con. Making a young woman’s day by trading her my Supergirl bag for her Teen Titans Go! bag. It took some more trading to get a couple of Black Lightning bags.

July 18: San Diego Comic-Con. Great panels on Thursday. A spotlight on the deservedly legendary Maggie Thompson with Mark Evanier and Leonard Maltin in the am. The Mark (Evanier), Sergio (Aragones) and Stan (Sakai) Show with three of my favorite creators/people.

July 20: Comic-Con. Thursday night. The Comic-Con 50th Anniversary reception at the Marriott Marquis Marina Ballroom. So many dear old friends celebrating an incredible landmark for this most wondrous of comics events! 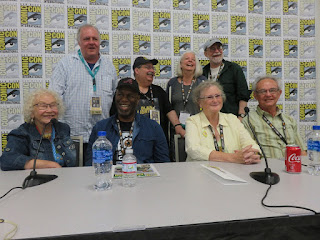 July 21: Comic-Con. Friday morning. That 70s Panel with host Mark Evanier, Mike Friedrich, Arvell Jones, Lee Marrs, Trina Robbins and Louise and Walt Simonson. What a great way to catch up with so many comics greats!

July 22: Comic-Con. Friday. Mike Friedrich and I had a wonderful chat after our panel. Mike’s post-writing life took him to amazing places. He’s happy with his new path as a minister and I’m just as happy for him. Good guys deserve happy endings.

July 23: Comic-Con. Love for Black Lightning. It was all over the convention from the fans to the pros to convention center workers to a shuttle bus driver. If only DC Comics understood what it has in this iconic character and his creator.

July 24: Comic-Con. My first visits to Mattel’s booth to confirm my pre-order of the Strange Lives of Batman action figures set were awful. Long, already capped lines. To its credit, Mattel recognized the problem and set up a separate table for pre-orders. It took me less than five minutes. Of course, now it feels like an eternity waiting for the set to arrive. 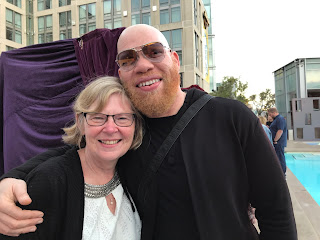 July 25: Comic-Con. The WB/Comic-Con 2019 Cocktail Media Mixer on Friday night at the Float Rooftop Bar at the Hard Rock Hotel. The carnival theme included a customized bag, carnival games, wonderful food and drinks and the pleasure of introducing Saintly Wife Barb to Black Lightning cast members and others.

July 26: Comic-Con. I got to enjoy the convention with my Saintly Wife Barb, daughter Kelly, her roommate Lauren and my goddaughter Vanessa. I am so blessed to have these women in my life.

July 28: Comic-Con. Chatting with Larry Ganem in the DC Hospitality Suite. He’s a good guy and the closest thing I have to any kind of relationship with DC. Whether my association (or the lack thereof) with DC changes or not, I’m glad for his friendship. The Suite was pretty cool, too.

July 30: Comic-Con. Ending my Comic-Con weekend by taking Saintly Wife Barb, daughter Kelly and Kelly’s roommate Lauren to dinner at Buster’s Beach on the lovely boardwalk behind out hotel. A perfect cap to our Comic-Con.

July 31: Comic-Con. The countless, well, at least more of them than I can count, volunteers, staff members and organizers who made the convention better for everyone. I thank all of you from the bottom of my comics heart.

Posted by Tony Isabella at 8:33 AM