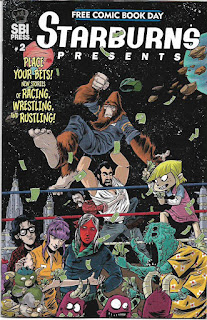 Starburns Presents #2 is an anthology presenting six excerpts from SBI Press, a division of Starburns Industries. I had no idea what this company was until I did a Google search and found its website. It’s a full-service production company which has done what seem to be a bunch of shows on Cartoon Network’s Adult Swim. The studio is also involved in advertising animation, podcasts, vinyl records and graphic novel creation.

QUALITY: Like most anthologies, this is a mixed bag. I got a kick out of “Nasquatch,” which is about a race car-driving sasquatch. I have some interest in one strip about intergalactic wrestling and another involving the Mogwai from Gremlins. The writing and art are a mixed bad as well. Good on the strips I mentioned, journeyman at best on the others.

ACCESSIBILITY: So-so. The series I liked were very accessible and the others not so much.

SALESMANSHIP: So-so. That I had to do a Google search to find out anything about the publisher was not a good sign. The last panel of each feature directs you to Comixology for more of them. The inside front cover is nothing more than a credits page, which I think was a wasted opportunity. The inside back cover is a house ad for SBI’s cassette tapes. The back cover is a contents page, another wasted opportunity. 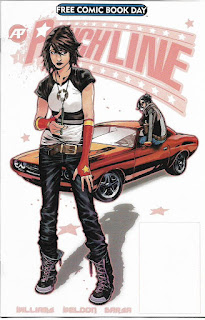 Punchline #1 [Antarctic Press] is a Free Comic Book Day reprinting of the first issue of a super-hero title by Bill Williams with art by Matthew Weldon. I’m tempted to immediately take a point off on account of the book’s cover logo is obscured. On a first issue of a new title. That’s a rookie mistake, but I like the issue so much I’m going to overlook it. This time.

QUALITY: This is not a game-changing super-hero comic book, but it is a very good one. I like the lead character. The writing is top-notch. The art is equally so. I plan to order the Punchline trade paperback.

ACCESSIBILITY: Everything a new reader needs to know is contained in the 26-page story.

SALESMANSHIP: Good. There’s a full-page house for a Punchline trade paperback. There’s another full-page ad for the next issue of the comic book, though that isn’t made explicitly clear. There’s a back cover ad for the publisher, which, unfortunately, fails to promote any of said publisher’s other titles. 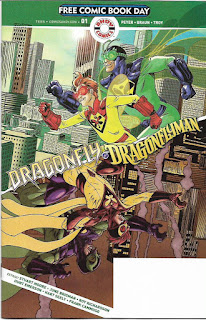 Dragonfly and Dragonflyman [Ahoy Comics] showcases two titles from a new publisher that has gotten off to an impressive start. In this Free Comic Book Day issue, we get a 20-page Dragonfly/Dragonflyman story from the title The Wrong Earth, an eight-page Captain Ginger story (humanoid cats in space), a two-page strip by Hunt Emerson and a one-page prose story.

QUALITY: Dragonfly and Dragonflyman involves two alternate universe versions of the same vigilante who, in The Wrong Earth, end up on each other’s world. This story predates that event. It’s written by Tom Peyer with art by Russ Braun. It’s first-rate stuff.

Captain Ginger is very well done by writer Stuart Moore and artist June Brigman, but it didn’t do much for me personally, even though I can recognize its quality. The Hunt Emerson gag strip is hilarious and the text story, as is usually the case with me and comic-book text stories left me cold.

ACCESSIBILITY: I had absolutely no trouble getting into any of the stories in this issue.

SALESMANSHIP: Solid. There’s a welcoming editorial, a house ad for The Wrong Earth and house ads for other Ahoy Comics titles. Still, the back cover does nothing more than reprint the cover sans logos and other copy. That’s a waste of valuable real estate.

SCORE: Nine out of ten. 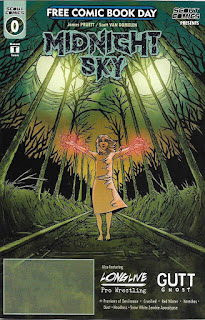 Scout Presents Midnight Sky #0 [Scout Comics} has three excerpts from various of their comic books and a passel of nicely-crafted house ads for seven other titles. Near as I can recall, this FCBD book is my first look at Scout Comics. What I see here looks very professional to me.

QUALITY: The 10-page Midnight Sky excerpt by James Pruett with art by Scott Van Domelen was well-written and well-drawn, though a bit more background information would have helped. I’d like to see more of this series.

Long Live Pro Wrestling by James Haick III and illustrator Branko Jovanovic is intriguing. It’s about a former pro wrestler turned talk show host who decries the silly stories foisted on wrestlers by their bosses. I’d like to see more of this as well.

Gutt Ghost? This four-page gag strip did nada for me. The writing wasn’t witty and the art was just kinda ugly.

SALESMANSHIP: Excellent. Though not every one of the house ads made me want to read the comics they advertised, these ads did give me enough information to make my decisions. Crucified, Red Winter and Headless are the ones that interest me.