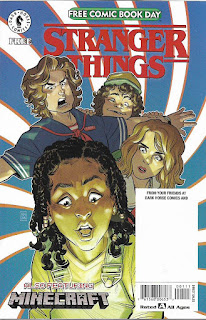 Welcome to yet another installment of my 2020's Free Comic Book Day reviews. My pals at Stormwatch Comics in West Berlin, New Jersey send me these FCBD comics so I can read and write about them in the bloggy thing. Only twice have I actually reached my goal of reading and writing about all the FCBD comics available in a given year. However, with just ten 2020 issues to go, I think I’m going to able to repeat that achievement once again.

We start today with Stranger Things [Dark Horse Comics], which has a 10-page Stranger Things story by writer Greg Pak with Gabriella Antali on the art. There’s also a 10-page Minecraft story written and drawn by Stephen McCranie. I’ll preface my comments by saying this comic was always going to be a tough sell to me. I have never seen an episode of Stranger Things and my interest in video games like Minecraft is non-existent.

QUALITY: Meh! Neither story impressed me. My wife and son watched Stranger Things and, from what they told me about the series, this FCBD story bears little to no resemblance to that show. I thought the art was good. As for the Minecraft story, I wasn’t entertained by that one either.

ACCESSIBILITY: Poor. I needed a lot more information before I could even begin to figure out what was happening in the stories. 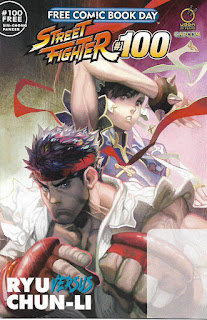 Street Fighter #100 [Udon/Capcom] presents what I assume is the 23-page story from that anniversary issue and a three-page feature in which Udon artists spotlight their favorite illustrations from the battle manga. The story is written by Ken Siu-Chong and drawn by Panzer. I’ll warn you going into this review that battle manga and anime holds little interest for me.

QUALITY: Mostly passable. The setting for the inevitable battle is a wedding anniversary party and I thought that was a clever touch. However, the art and coloring are so over-rendered that I couldn’t always figure out who and what I was looking at.

ACCESSIBILITY: Pretty much non-existent. As a new reader, I didn’t have clue one who these characters were and what their situations were.

SALESMANSHIP: Okay. There was a two-page ad showcasing a bunch of Street Fighter trades. 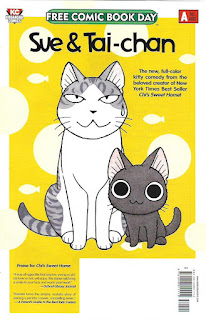 Sue & Tai-chan [Kodansha Comics] is, to quote the cover blurb, “the new, fill-color kitty comedy from the beloved creator of New York Times Best Seller Chi’s Sweet Home.” It as delightful a comic as I have read all year.

QUALITY: Creator Konami Kanata’s writing and art are deceptively simple. But he uses those simple lines and sparse dialogue to great effect. I was charmed and impressed.

ACCESSIBILITY: Even if you hadn’t read the earlier book, you will have no trouble getting into this one. Perfect for new readers of all ages.

SALESMANSHIP: It could have been better. The inside front cover credits and copyright stuff could have been half-a-page, allowing for a half-page ad. There are two interior ads: one for a different
kitty series by Kanata and the other for a magical girl manga. The back cover advertises a Chi coloring book.

SCORE: Ten points out of ten points. As soon as I finish proofing this review, I’m requesting more Kanata work from my local library. 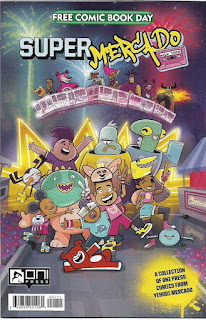 One of the coolest things about Free Comic Book Day is discovering new creators and comics previously unknown to me. Even if I’m not bowled over by them, I do appreciate seeing their work and their comics for the first time.

Super Mercado Mix Tape [Oni Press] features excerpts from graphic novels by writer/artist Yehudi Mercado. In Sci-Fu Book One: Kick It Off, a young DJ summons a UFO with one of his “legendary turntable mixes” and said craft transports him and others to another planet. In Fun Fun Fun World, alien invaders try to conquer the galaxy’s most unconquerable planet...Earth! The comic also had an interview with Mercado.

QUALITY: While not precisely to my taste, Mercado’s enthusiasm for his stories is infectious enough to draw me in. I think somewhat younger readers than me will enjoy this material.

SALESMANSHIP: Great. A welcoming introduction on the inside front  cover set a nice tone and there were several interior ads for other Mercado projects. 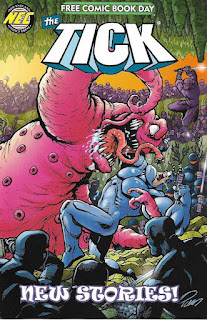 The Tick [New England Comics] features two new stories of the title character plus a pin-up. The tale were written by Jeff McClelland with art by Ian Chase Nichols.

QUALITY: “The Enemy Within” was a solidly amusing adventure while the largely silent “Moon Marathon” was just a collection of barely connected scenes that were less than satisfying.

ACCESSIBILITY: Tolerable. I suppose if you were a regular reader of The Tick you have been able to follow the stories better than I was able to.

SALESMANSHIP: Very good. The inside front and back covers had ads for several Tick collections.

With Free Comic Book Day 2021 almost upon us, I’m gonna concentrate on reading and reviewing the rest of the 2020 issues. I’ll be back soon with another FCBD bloggy thing. See you soon.

Posted by Tony Isabella at 7:06 PM