I HAVE FAILED MY GARAGE SALES AND OTHER UPDATES 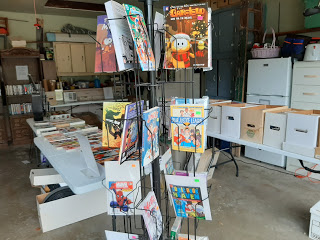 I’m back from Fanboy Expo Orlando and getting into the great many things I’m determined to finish by the end of the month. But I also want to update you on some Tony stuff.

Honestly, I feel I’ve let my customers down this summer. I wanted to do nigh-weekly sales and uncover thousands of cool items to put into those sales. Unfortunately, life with all its challenges got in the way of my ambitions.

With the help of family member and some others, I hope to begin my preparations for my 2022 garage sales almost as soon as this year’s sales end. The plan is to have a great opening day with many boxes of items waiting in the wings for restocking.

In the meantime, to make up for the many cancelled garage sales of 2021, I’ll be giving away free Isabella-related signed posters with every purchase for as long as my supply lasts. One per customer per day. These are prints and posters I’ve been selling for $5 and $10 apiece. Get them while the getting Is good.

I’ll have more garage sales updates in the near future.

I failed in my attempt to read and review all of last year’s Free Comic Book Day comic books. However, as I only have five issues to go, I’m gonna go ahead and complete that series of bloggy things. Albeit probably not before my pals at Stormwatch Comics send me all the 2021 FCBD items. Which, in my infinite ambition, I hope to read and review before the 2022 FCBD comics are released.

I have two remaining convention appearances in 2021, though I’m not adverse to adding additional events in October, November and even December. Here is what is already on the schedule:

I’d love to do events in major cities, especially those I have not appeared in recently or ever. I am waving my appearance fee for all conventions between February 2022 and February 2023. Which doesn’t mean the promoters won’t have to pay basic expenses. These include transportation, hotel and a per diem for meals.

If I’m flying to an event, I need two airfares with an aisle seat for me and with that seating being as near the front of the plane as possible. I’d really love first-class seating because I’m going to be 70 come December and because I’m a nervous flyer in the best of circumstances. The promoters will also have to pay for at least one piece of checked luggage for both me and my companion.

If I’m driving to an event, promoters will need to cover mileage. That’s usually fifty cents a mile each way. I’m not an inexpensive guest, but I do give great convention.

I’m looking into offering some sort of special print or other item for each convention on the Tour. These will be produced in limited number and will only be available at the conventions on the Tour. Some of the prints will be new images and others will be covers of things I have written.

I’d love to work with conventions in producing these items, which could include caps and t-shirts and other things. I’d also like to see the proceeds from these items go to worthy charities the events support. Now that I think about it, if publishers and other groups want to produce items for the Tour, I’d be happy to work with them as well.

If you’re a promoter who would like to be part of the Tour, or one of the afore-mentioned publishers and other groups, the best way to get things rolling is to e-mail me. I will respond to any inquires as swiftly as possible.

Although I won’t be listing my 2022 appearance schedule for a bit, I have agreed to do a number of shows next year. Two of those are in Texas, but I’ve been unable to get hold of the promoter to work out the details. If you’re that promoter, please contact me as soon as possible so that I can lock in those dates. Also, if you’re that promoter, you will not be charged the appearance fee you agreed to pay me. What a deal!

One more note. There’s a convention promoter who brought me to his show year after year. I liked the show a lot, praising it whenever I wrote about it. Then, in 2019, he declined to NOT invite me because it was an election year and because I was a meanie to Republicans online. Freedom of speech does not shield one from the consequences of that freedom, but the promoter had no problem hosting such toxic guests as Dean Cain and Kevin Sorbo. His call.

If that promoter wants to be part of my Golden Anniversary Tour, I would certainly consider attending his event. However, besides all the requirements listed above, he will have to pay the equivalent of my appearance fee to a charity of my choosing. Relax, it won’t be Americans who Want Republicans to be Considered Terrorists. It will be the Hero Initiative.

The promoter has the absolute freedom to invite or not invite anyone he wants to his convention. However, as with free speech, he is not immune to the consequences of his decisions.

More on the Tour in the weeks to come.

While I’m fulfilling work commitments, I’m also thinking ahead to what my next projects will be and how best to do them and bring them to the public. I’m not adverse to working with existing publishers in the least, if I find the terms and working conditions satisfactory. However, if you’re a publisher whose business plan is to expect the creator to pay for the complete product, demand 50% of the editorial control and 50% of all related rights and, expect me to turn over movie and television rights to  your own agent, I’m not interested. If a publishing partner brings something to the table, I’ll be happy to let them have a nice piece of the action. But putting my creations completely in the hands of another party really hasn’t worked out for me in most ways.

What do I like in paying gigs? Editors who want to help me tell my stories better and not be a typist for their own stories. Working conditions as free from drama as possible. Assignments that are fun and/or challenging. Agreements in writing. Good communication. Payment on completion of the assignment. Copies of my work. Royalties on sales and for reprints of my work, as well as a piece of the action when my work is adapted into other media or merchandise.

Example, if someone asks me to write a Teenage Mutant Ninja Turtles story or series and I use only existing characters, I’d expect to be further compensated if my stories are made into an animated or live action movie or TV show. But I would not expect a cut of any action figures and such. If I created any new characters, I would expect a cut of action figure sales and such.

If you want to work with me, e-mail me with as much detail as you can offer. We can talk. If you can’t meet my needs, it’s no harm, no fault. I won’t hold it against you unless, you know, you’re real insulting about it. We’re all friends here, right?

There are probably other updates I could mention, but this bloggy is already fairly long. Thanks for stopping by. I’ll be back soon with more stuff.