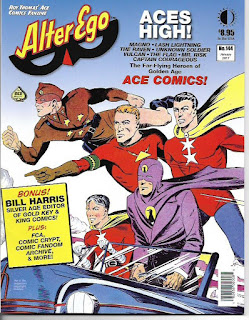 Alter Ego #144 [January 2017; $8.95] is the “Aces High” issue of my favorite magazine of comics history. The cover spotlights “The Far-Flying Heroes of the Golden Age Ace Comics”: Magno, Lash Lightning, the Raven, Unknown Solider, Vulcan, the Flag, Mr. Risk and Captain Courageous. Inside the issue, long-time comics fan and historian Mark Carlson-Ghost writes about these heroes.

Alter Ego is always aces in my book. Check it out.