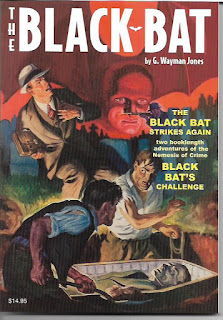 The Black Bat is a cowled pulp magazine crime-fighter whose career paralleled the Batman’s and who inspired the classic Batman foe Two-Face! Like the unfortunate Harvey Dent, District Attorney Tony Quinn was attacked with acid while prosecuting a murderous criminal. Sanctum Books has started reprinting the Black Bat novels that ran in the legendary Black Book Detective magazine. I reviewed the first of these Sanctum volumes here.

The Black Bat #2: The Black Bat Strikes Again and The Black Bat’s Challenge [$14.95; January 2016] features the Black Bat’s third and fourth book-length adventures from the November 1939 and January 1940 issues of Black Book Detective. These stories are written by the prolific Norman Daniels under the Thrilling Publications house name of “G. Wayman Jones.” Here are the title page blurbs for each of these novels.

A series of mass murders sets Tony Quinn, lightning-fast foe of crime, on the trail of insurance killers who make a profitable business of slaughter!

Beggars cannot be choosers, or the leader of one of the most vicious criminal gangs of the lame, halt and blind ever assembled would never have chosen to buck that tenacious nemesis of crime - Tony Quinn!

In addition to the two Black Bat novels, this volume also features “The Belfry,” Will Murray’s informative column on the Black Bat and the character’s ties to the fledging comic-book industry. There are also features on “Raymond Thayer and the Mask” by publisher Anthony Tollin and “The Men Behind the Black Bat.”

Who is the Mask? The Mask is the comic-book adaptation of the Black Bat with the name changed as part of Thrilling’s agreement with DC Comics over the similarities between their hero and the better-known Batman. This second Black Bat volume reprints a six-page Mask tale from the May 1940 issue of Exciting Comics.

Posted by Tony Isabella at 2:41 PM