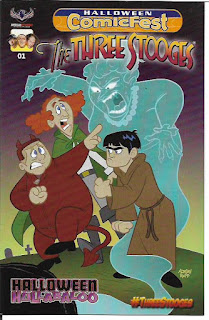 Halloween ComicFest is a smaller and spookier version of Free Comic Book Day. My pals at Stormwatch Comics sent me full-sized and mini-sized comics from the event. I’m attempting to read and review all of them before the end of the year.

I look for certain things when I review Halloween ComicFest items. Is the material in the comic well-written and well-drawn? Does it present a good enough chunk of the comic or graphic novel to entice a reader into buying the comic? Is it reader-friendly enough to welcome rather than confuse a new reader?

From American Mythology Productions, The Three Stooges: Halloween Hullabaloo Vol. 1 No. 1 is a full-sized comic book clearly aimed at readers nostalgic for one of the great comedy teams of the big and small screen. I don’t know if younger readers are cognizant of the Stooges, but they were a constant presence on TV when I was a kid and, as an adult, I did not hesitate for a moment before ordering The Three Stooges Collection on DVD.

Counting the cover and inside front cover contents page, this issue has 29 pages of Three Stooges material. Up that to 30 pages if you count the inside back cover ad for The Three Stooges: The Curse of  Frankenstooge that was published at the same time as this giveaway comic book. There are comics stories, a parody ad, a trio of cut-out Stooges masks (though you’d need a really small head to be able to wear them), coloring pages, a still from one of the Stooges shorts and a preview of the Frankenstooge comic book. The writing and art won’t win any awards, but the work is solid and the comic is fun. The back cover is a house ad for a Pink Panther comic book.

RATING: Excellent. I almost didn't give this issue that high a score, mostly because it lacked introductory information about the Three Stooges. But I think the target market for this series was always going to be fans who already know about the Three Stooges. If such a reader enjoyed the material in this free comic, they will likely seek out more of the same and that...as I’ve been saying throughout this series of reviews...is the purpose of a free comic book. 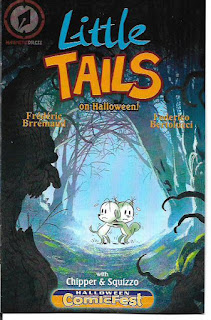 Little Tails on Halloween Original Halloween Mini-Comic [Magnetic Press] is “an adorable wildlife exploration series for all ages, from the creators of the award-winning LOVE books.” It’s created by Frederic Brremaud and Federico Bertolucci with illustrated by the latter. This one is hard to describe.

Friends Chipper and Squizzo are a dog and a squirrel. Each page has two rows of panels -one at the top of the page, the other at the bottom - with a painting in the middle. The panel art is cute and lively. The paintings are lovely. I found the nine pages of story to be interesting, but not interesting enough that I’ll be seeking out the two 32-page hardcover volumes of the comic. At $14.99 each, that’s not decent bang for the bucks. It’s not entirely outrageous for a hardcover children’s book, but still not what I would call a good value.

In the middle of the story, we get two game pages featuring Chipper and Squizzo. One is a maze, the other is crossword puzzle in which the reader is given words and must fit them into the puzzle. Don’t be a hero. Use a pencil.

RATING: Good Plus. The material is interesting. There’s a house ad for the Little Tails hardcovers, which earns them points. I’m sure some readers will like it better than I did. 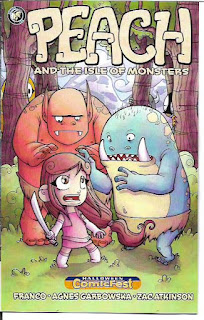 Peach and the Isle of Monsters #1 has an Action Lab corner logo on the cover, but, inside, the mini-comic is said to be published by the delightful Aw, Yeah Comics. The 10-page excerpt from a longer work was written and created by Franco Aureliana, drawn by Agnes Grabowska and colored by Zac Atkinson. There’s a lot I liked about this taste of the series.

Peach, our feisty young heroine, is said to have come from a peach. Her adoptive father loves her and tries to protect her from being bullied and harassed by her unthinking classmates. But, when rumors of monsters entering their village at night reach them, Peach’s dad gives her a sword and sends her to find her own way in the world. That’s pretty heavy stuff for a book starring a kid.

RATING: Not Quite Excellent. The title character is appealing. The writing and art are first-rate. However, though there are ads for two other Action Lab titles, there is no ad for the further comics adventures of Peach nor is the reader given any indication where he or she can go to find the rest of the story. Free comic books are sales tools. This one needed sharpening. 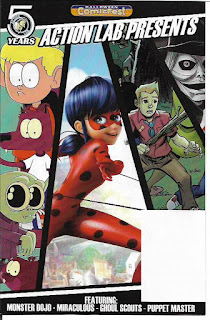 Also from Action Lab is a full-size comic I think is called Action Lab Presents. It features a few pages each from four comics series: Miraculous, Monster Dojo, Ghoul Scouts and Puppet Master. This is an unsatisfying effort that only does justice to one of these four features. We’ll talk about that one first because it’s the only one with a house ad giving the basic concept and because it’s the best written and drawn of the four.

Be Prepared. Be Very Prepared.

Something stranger than usual haunts Full Moon Hollow. Paranormal capital of the world. When zombies attack during the Hemlock County Scouting Jamboree, only a group of misfit scouts can save the Hollow.

The six-page preview is written by Steve Bryant and drawn by Mark Stegbauer. Zombies generally bore me; this preview doesn’t change that. But I like the misfit scouts angle and, with more interesting monsters, would be more inclined to read further.

The other features? The Miraculous preview (8 pages) doesn’t seem to have anything to do with the house ad for the comic. The house ad doesn’t explain anything.

Monster Dojo (8 pages) is clearly intended to be humorous, but it’s just not very funny. The writing and art are journeyman at best. It just doesn’t entice me in the slightest.

Puppet Master (4 pages) seems to be a continuation of the movies, which I’ve never seen. This excerpt doesn’t give me a leg-up into the universe of the movies. People who have seen the movies and who like them would perhaps be interested in the comic book, but this new reader wasn’t won over.

RATING: Poor. Only Ghoul Scouts shows any potential. Beyond that, this full-size comic book doesn’t fulfill its mission of convincing new readers to come onboard. 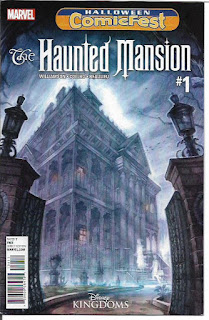 Haunted Mansion No. 1 Halloween Comic Fast 2016 [Marvel Worldwide] was an eye-opener. I had completely ignored these comic books based on Disney park attractions. This full-size giveaway has me wanting to read them. Major points for that.

The 20-page story was written by Joshua Williamson. I have enjoyed a number of his other comics works. It’s drawn by Jorge Coelho with colors by Jean-Francois Beaulieu. I don’t know if the back story of this comic book is the same as that of the park attraction, but the premise of a house that holds spirits captive is an intriguing one and plays out well in this issue. I’ll be requesting the hardcover of the complete story from my local library.

There are house ads for several other “Disney Kingdom” offerings: Enchanted Tiki Room, Figment, Big Thunder Mountain Railroad and Seekers of the Weird. There are also house ads for a couple other Marvel titles. And, as with other Marvel giveaways, the placement of the house ads break up the story frequently and annoyingly. I’m sure either editorial or marketing has given this a lot of thought, but I suggest they revisit that thinking.

RATING: Excellent. The Haunted Mansion story drew me in. I enjoyed it quite a bit and want to read more. The quality of this story was high and makes me want to read those other Disney Kingdom titles. That’s a successful giveaway comic book. 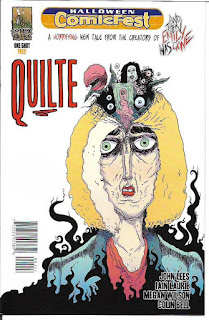 The full-sized Quilte #1: Halloween ComicFest Special [Comix Tribe] is the last of these special event free comics I’ll be reviewing. It appears to be a one-shot which, since it’s complete in itself, seems to be intended to promote other ComixTribe titles.

Quilte is about a woman who enters the terrifying dreams of others to help them out of those dreams. It’s written by John Lees. It’s drawn by Iain Laurie, whose style is off-putting to me. This horror story does have a satisfying ending, but that wasn’t enough for me to consider reading other comic books by these creators.

This is definitely one of those “your mileage might vary” comics. I didn’t care for it. Other readers might. The house ads didn’t entice me, but, to their credit, they followed the story and didn’t interrupt my reading of the story.

RATING: Good. The material, while not to my liking, might appeal to readers more in tune with it. The house ads don’t do a great job of promoting the other titles, but they are good enough to steer any interested readers to those titles.

That completes my series of Halloween ComicFest reviews. Come back tomorrow for the continuation of Tony Isabella’s War on Christmas  2016. I’ll be looking at Black Christmas (1974) and Silent Night, Deadly Night Part 2 (1987). See you then.

Posted by Tony Isabella at 8:06 AM