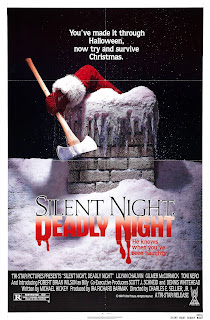 Welcome, girls and boys, to Tony Isabella’s War on Christmas 2016. Oh, don’t worry, I love Christmas as much as anyone. But it’s not lost on me that there are an awful lot of Christmas-themed horror movies and, by the crimson beak of Rudolph, I am going to view and review as many of them as I can before that guy who’s been watching you all year long comes creeping into your house.

Silent Night, Deadly Night [1984] is best known for the outrage it generated from critics, people who would have never gone to see any horror movie, and a surprisingly petulant Mickey Rooney. I’ll have more on Mickey in a bit. Most of the outrage seemed to center on an advertising campaign that emphasized an axe-wielding Santa Claus. Unmentioned at the time were two earlier films featuring murderous Santas: Tales from the Crypt (1974) and Christmas Evil (1980).

Though not a classic, Silent Night, Deadly Night deserves better than to be remembered only for the controversy. During its opening weekend, it out-grossed A Nightmare on Elm Street, which opened on the same weekend. But the initial outrage spiraled out of control as angry PTA members protested outside theaters. The distributor pulled all advertising for the movie six days after its release and the film itself was pulled from theaters shortly thereafter.

Directed by Charles E. Sellier Jr., SNDN is a perfectly watchable slasher flick. Written by Paul Caimi and Michael Hickey, the film has some sympathetic characters. Even the killer, violent though he may be, is not a soulless murderer. He’s a tragic young man twisted by childhood trauma and the abuse he suffered while growing up in a Catholic orphanage. There are three true sociopaths in this movie and one of them is the orphanage’s brutal Mother Superior. Here’s the Internet Movie Database synopsis:

After his parents are murdered, a tormented teenager goes on a murderous rampage dressed as Santa, due to his stay at an orphanage where he was abused by the Mother Superior.

The first sociopath is Billy’s grandfather. Non-responsive until he is alone with Billy at a nursing home, Gramps comes to long enough to scare the crap out of the youngster with his screed on how Santa punishes any child who was naughty even once during the year. Billy is visibly shaken.

The second sociopath is a robber wearing a Santa Claus costume who murders a convenience store clerk for thirty bucks. His car breaks down and he flags down Billy’s family. Though Billy begs his folks not to stop, his dad pulls over. Santa pulls a gun and shoots Dad when he tries to drive away. The car crashes.

Santa then tries to rape Mom, before slitting her throat when she fights back. Billy hides in the woods while his infant brother is left screaming in the now-wrecked car. Both boys will end up in the orphanage.

When he turns 18 and leaves the orphanage, the sympathetic Sister Margaret [wonderfully played by Gilmer McCormick] gets him a job at a local toy store. He works hard and, when the store’s Santa Claus is injured in an accident, he agrees to help his boss out by being Santa on Christmas Eve. Billy struggles with his issues, but they are too great for him to overcome.

Billy’s triggers fall into place quickly. An unruly child sitting on his knee. A dickish co-worker fornicating in the back storeroom during the store Christmas part. Saying “punish,” Billy dispatches the fornicators, his boss and one other co-worker before heading out to deal with more naughty folks.

Sister Margaret has contacted the police, but the cops can’t find Billy. Two of them draw their guns on a father dressed as Santa to surprise his daughter. It’s the perceptive nun who figures out Billy is heading to the orphanage to settle scores with Mother Superior [Lilyan Chauvin]. But there will be collateral damage as the cops head for the place.

The first cop on the scene shoots a deaf priest dressed as Santa. When he checks the grounds, Billy gives him an axe to the gut. The orphanage doors are locked, but a young boy, seeing Santa through the glass doors, lets Billy in. It looks like Mother Superior will finally be punished for her sins. But Sister Margaret and the lead detective arrive in time for the latter to pump Billy full of lead.

Some very cool stuff in the final minutes. Mother Superior doesn’t flinch and berates Billy. A dying Billy tells the frightened kids they don’t have to be scared because Santa’s gone.

The most chilling moment comes when Tommy, Billy’s young brother, stares at Mother Superior and says one word:

Earlier I wrote Silent Night, Deadly Night was a watchable slasher film. The more I thought and wrote about it, the more I realized I wasn’t giving the movie its due. It’s a pretty good slasher movie. Its lead is a sympathetic monster whose ultimate fate is as tragic as those of his victims. The story flows well. It doesn’t linger on the blood and gore. Even the nudity isn’t gratuitous because it’s part of the protagonist’s childhood trauma. The acting ranges from okay to exceptional. This is a movie that got a bad rap.

The critics were merciless. Gene Siskel and Roger Ebert condemned the film with Siskel taking being an ass to a new level by reading the names of the movie’s production crew in a feckless attempt to shame them. He stopped just short of suggesting the townspeople grab pitchforks and torches. It was not his finest moment.

Mickey Rooney was vocal in his dislike of the movie, suggesting the “scum” who made it should be “run of town.” Rooney would appear as the title character in 1991's Silent Night, Deadly Night 5: The Toy Maker. During the film, Rooney’s murderous toy maker is dressed as Santa Claus. It’s been said Rooney didn’t know the movie was part of the series while it was being filmed. I’m not buying that for a second. As with the commercialism of Christmas, morality goes out the window when there’s a buck to be made.

On my just-thought-it-up scale of zero to forty-one whacks, I give Silent Night, Deadly Night 32 whacks. It’s worth watching at least once and perhaps even more than once.

Okay, I got a tad long-winded today which is why you only get the one movie review. But I’ll return in a day or three with more of my cinematic War on Christmas. In the meantime, come back tomorrow for “Rawhide Kid Wednesday,” followed by more of my Halloween ComicFest reviews on Thursday.

Posted by Tony Isabella at 6:08 AM