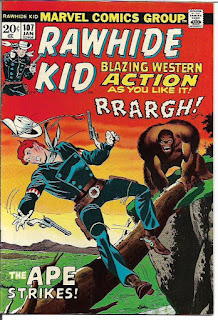 The Rawhide Kid is my favorite western comics character and one of my favorite comics characters period.  Something about the short of stature (but big on courage and fighting skills) Johnny Clay spoke to the short of stature (but big on comics-reading skills) teenage Tony Isabella.  After rereading the Kid’s earliest adventures when Marvel Comics reprinted them in a pair of Marvel Masterworks and an Essential Rawhide Kid volume, I wanted to reacquire every Rawhide Kid comic, reread them and write about them in this bloggy thing of mine. This is the 93rd installment in that series.
The Rawhide Kid #107 [January 1973] reprints “The Ape Strikes” by Stan Lee and Dick Ayers. This strange 18-page story first appeared in The Rawhide Kid #39 [April 1964]. Jack Abel penciled and inked the new cover for this presentation of the story.

I wrote about “The Ape Strikes” back in October of 2012, calling it “a wacky classic of the Silver Age of Comics.” You can read what I wrote by going here.

We only have a handful of new Larry Lieber stories remaining before The Rawhide Kid goes all reprint. When we hit those issues, I’ll be linking to past bloggy things discussing the reprinted stories and adding new comments about stories not discussed previously. I will continue discussing new editorial material and advertising as seems appropriate.

This issue’s Marvel Bullpen Bulletins page kicks off with Stan Lee  plugging his new Monster Madness magazine in “Stan’s Soapbox.” As I told you last time around, the magazine consisted of big photos from monster movies with Stan writing humorous dialogue balloons on them. I got a kick out of the often corny gags, but it wasn’t until I worked with Stan on the third and final issue of the title that I realized how much he loved doing the magazine. Maybe someday I’ll do something like it.

The next item announces The Monster of Frankenstein, a new series by Gary Friedrich and Mike Ploog. That’s followed by a plug for Halloween-themed issues of Thor and Amazing Adventures (which was starring the Beast). And that’s followed by a teaser plug for new developments in the life of young Franklin Richards in the new issue of Fantastic Four.
The “Marvelous Marvel Mini-Items” this month:

Dick Ayers was teaching a course in comic-book artistry at the world-famous Guggenheim Museum. It was for the benefit of underprivileged kids in the New York City area.

Rich Buckler became a father. This made him a day or two late on a few deadlines, but Marvel seemed okay with that.

John Jakes’ Brak the Barbarian appeared in Chamber of Chills in a story written by Jakes with art by Val Mayerik and Dan Adkins.

George Alex Effinger and artist Gray Morrow bought an end to the “Warrior of Mars” feature in Creatures on the Loose.

Hero for Hire was promoted to a monthly title with art chores being shared by Billy Graham and George Tuska.

The “Mighty Marvel Checklist” listed 29 issues. Some highlights: War is Hell #1 (featuring reprints drawn by Al Williamson, George Woodbridge, Dick Ayers and Bon Powell); Spoof #3 (parodies of The Partridge Family, The Frogs and John Wayne); and the first issue of  Tex Dawson, Gunslinger with a new cover by Steranko and reprints by John Romita.

Running across the bottom of the page was an ad for the adaptation of The Invisible Man in Supernatural Thrillers #2.

The “Ridin’ the Trail with Rawhide” letters page had three letters from readers. Jeffrey McHale of Troop, Pennsylvania loves Rawhide Kid, but wants to know why so many Marvel western heroes are wanted men and why so many of their horses are gray. The less than spiffy editorial reply segues into plugs for Red Wolf and The Gunhawks

Scott Phares (no address given) doesn’t realize being a jerk on the Internet won’t be a thing for many years. He writes:

I have just finished reading a copy of the RAWHIDE KID. I think the Kid is sorta dumb. He probably couldn’t even pick up a Colt. 45. Much less swing one around like he does.

That delightful note is followed by the usual arrogant missive from the anonymous Gringo Kid of Elmsford, New York. Sigh. I guess the comics industry has always had its anonymous trolls, but the lack of the Internet kept them from being a daily boil on comics fandom's ass.

The issue has the usual classified ads, several of which placed by comics dealers. It also has an ad for The Menomonee Falls Gazette. Now that was a wondrous weekly publication, presenting such great newspaper strips as Tarzan by Russ Manning, Secret Agent X-9 by Al Williamson, Superman by Jerry Siegel and Joe Shuster, Modesty Blaise and many others. Somewhere in my Vast Accumulation of Stuff, I have the complete run of the newspaper. 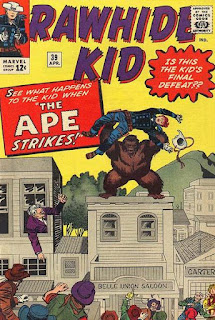 As “a special blockbuster bones from mighty Marvel,” the original Jack Kirby/Chic Stone cover from Rawhide Kid #39 runs following the last page of the story. The cover has always looked a little weird to me, but it’s also growing on me. Go figure.

The final editorial page in the issue is “a Marvel Masterworks pin-up” of the Rawhide Kid. It’s the image of the Rawhide Kid from the Kirby/Ayers cover of issue #20 [February 1961] with the background replaced with some sort of green wall with a large hole in it, as well as some other alterations. The Kid is now firing one of his guns and the other is now smoking as if it was just fired. We will probably see more such pin-ups in future reprint issues.

That’s it for this installment of “Rawhide Kid Wednesday.” I’ll be back tomorrow with more stuff.