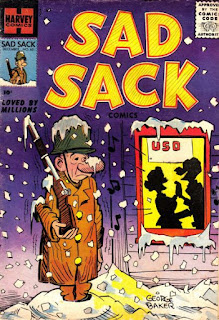 Seasonal affective disorder (SAD)...is a mood disorder subset in which people who have normal mental health throughout most of the year experience depressive symptoms at the same time each year, most commonly in the winter.

Back in the day, I used to mock people who claimed to have seasonal affective disorder. Until I discovered it was a real thing. Which was about the time I realized I suffered from it. Which I learned from Facebook. No, really.

Facebook has an “On This Date” feature which shows all your posts from all the previous years of that date. That’s when it hit me I suffered episodes of depression and weariness at pretty much the same time every year.

I even deduced why I was having these episodes. It went beyond the cold weather. It went beyond the madness of the Christmas season and my double anxiety at knowing I would be facing the birth family that has always considered me the black sheep of the family and in-laws who didn’t even think that highly of me. Which is all I’ll be saying about that. For now.

It was at this time of the year I suffered the worst professional setback of my career. Some of you know what that was. The others? Well it’s something I’ll touch on in my slowly-progressing memoirs of sorts. Just know that something happened. It was devastating to me and the family. It made me suicidal. It took me a long time to figure out how to beat this disorder. Which is not to say I’m not still fighting it. Every year.

What I do at this time of the year is put one foot before the other and try to keep moving forward. If I don’t accomplish everything I want to accomplish, I at least accomplish something. If I don’t do everything I wanted to do before Christmas, I do as much of it as I can without fretting that some friends will get cards and gifts after the holiday. I embrace real family, real friends, my work and all the other good things in my life.

I also...and I think this is important...I allow myself to have a bad few hours or even a bad day...and I don’t beat myself up about it. It happens. I get through it. I move forward.

This might not work for everyone. It works for me.

If you suffer any of the above, find something that works for you. It’s important for you, for those who care about you and for this sad sack who wants the best for all his readers.

These “Sundry Sunday” columns give me a chance to write about stuff that I want to write about for whatever reason, stuff that wouldn’t fill an entire column. This week, while watching President-Elect Donald Trump and the Republicans make a mockery of our country all over the country, I recalled how Superman was once said to battle for truth, justice and The American Way. But what do those words mean in Trump’s America?

Truth has already gone by the wayside. Facts don’t matter. If you feel something to be true, if you want it to be true, then, whether you have evidence or not, you think it’s true.

Trump claims he won the popular vote if you discount the millions of illegal votes for which there is no evidence. He backtracks on things he said during the campaign by either denying that he ever said them or dismissing them as statements that played well during the election but are not of interest to him now. Not surprisingly, many of his supporters said they never expected him to be truthful and are now shocked that their health care is going to be destroyed by the new Republican regime.

Justice? Trump is already violating ethical rules that have been in place for decades. He dismisses “conflict of interest” charges as immaterial; you knew he was a crooked businessman when you voted for him.

My concept of the “American Way,” the ideal to which we should ever aspire, is that we are a country that welcomes all kinds of people and treats them equally. That we are a country that looks out for the weakest members of our society. Kiss that goodbye under Trump. The bullies and the obscenely wealthy are in charge and they plan on keeping it that way.

I miss the Superman of Jerry Siegel and Joe Shuster’s original Man of Steel stories. I miss the guy who would not only talk truth to power, but would run power out of town on a rail if they harmed the oppressed and the powerless. That guy...he would make short work of Trump and his deplorable billionaires, morons and zealots. Yeah, I wish that guy were real.

I re-read the first four issues of Ta-Nehisi Coates’ Black Panther in trade paperback. While it’s unquestionably intelligent and well-written with gorgeous art and storytelling by Brian Stelfreeze, it leaves me more than a little cold. At the risk of sounding like one of those stick-in-the-past comic fans I often roll my eyes at, it’s because the Wakanda of which Coates writes is not the Wakanda of my favorite Black Panther writers: Don McGregor and Reginald Hudlin.  That’s not the fault of the current creators.

McGregor’s T’Challa had to struggle to keep his Wakanda safe...and he bled every issue to do so. But it was a Wakanda worth fighting for. Hudlin’s Wakanda was even more so, the advanced black nation that had never been conquered. Until, of course, lesser writers and editors decided that couldn’t stand.

Wakanda was destroyed two or three times in the name of dumb “big events.” T’Challa’s marriage to Storm - talk about a power couple - was ended. These were garbage comics. Garbage. Superman would have run those writers and editors out of the comics industry on a rail. Okay, *my* Superman would have done that.

My inability to warm up to the current Black Panther comics is not the fault of Coates or Stelfreeze. They are the unfair victims of my distaste for what had gone before.

One more thing. Whoever put together the Black Panther chronology for the trade paperback is also on my shit list. That chronology includes McGregor’s Jungle Action run but omits all the other great Black Panther stories he wrote for Marvel Comics Presents and other series. Don’t try to explain away this shocking omission by saying those other stories have not yet been collected...because they all should have been collected long ago.

The ball is in your court, Marvel. Shoot wisely.

Two questions I am often asked...

Which characters who you have written in the past would you like to write again?

Which character who you have never written would you like to write?

While there are characters I have written previously that I could enjoy writing again, there are only a few I feel passionate about. And some of those I would only want to write again in very specific circumstances. Let’s start with Marvel...

I would love writing slightly-goofy It! The Living Colossus stories if I could write them as I did in the 1970s but better. Back then, I was a “throw everything against the wall” kind of writer. I think I would be focused today. But just as much fun.

I would love to write a Ghost Rider Forever series, picking up from my last issue and ignoring the assistant editorial changes made to it. I had more to say about Johnny Blaze and would have liked to follow him as, freed from Satan’s power, he made a better life for himself and those around him.

If I could find the right angle on them, I would love to write new comic books about Tigra, Rocket Racer and the Sandman. Last I heard from her, Tigra was a single mom working for the police department. I love that concept.

The Rocket Racer stories I wrote for Jim Salicrup when he was the editor of the Spider-Man titles were lighthearted super-hero fun. They were too short for me to explore the character’s large family. I like the notion of a smart young man using his abilities to bring in super-villains and to support his family.

The Sandman was a favorite of mine during the time he reformed and became an ally of some of his former super-hero enemies. The tale where Sandman and the Thing have a beer instead of fighting is one of my all-time favorites. Kudos to writer Tom DeFalco for that gem. Alas, creators of limited imagination decided the Sandman must be a villain. Big mistake that because he was so much cooler as one of the good guys.

Black Lightning. Which should be obvious.

Satan’s Six. With the full blessing of Jack Kirby, I developed his creation into something that became as much Tony Isabella as it was Jack Kirby. It was an action-comedy and, though the art was not to my liking, it was great fun to write. I would write it again if I could continue to do it my way.

The Grim Ghost. Despite the presence of another writer’s credit on the six issues I wrote for the revival of Atlas Comics, that writing was all mine...albeit building on a short preview tale done before I was attached to the series. I had plans for a follow-up series, but those were torpedoed when Atlas went under. I did try to buy the property outright so I could continue the title elsewhere, but my offer was refused.

Now it’s possible that I may have forgotten other characters that I would like to write again, but these are the ones that leaped to mind when I was most recently asked this question.

Question #2? I’ll answer that one tomorrow as we expand this Sundry Sunday into a Sundry Monday. See you then.