THURSDAY THIS AND THAT 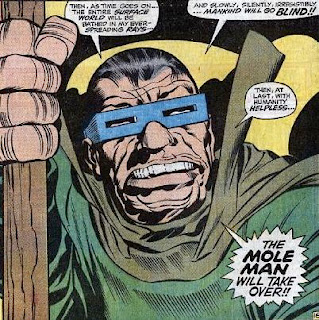 On Tuesday, I wrote there had been a slowdown in the family matter occupying so much of my time, which meant I could return to full-scale blogging earlier than I had anticipated. Though that slowdown turned out to be short-lived, I’m not going to take any more days off from this bloggy thing of mine. I consider it vital therapy for  my weary mind and soul. However, for the next day or two, I may be posting new bloggy things later in the day than has been the norm.

When we chatted on Tuesday, I started to answer a frequently-asked question:

Which character or series that you’ve never written would you like to write?

We continue on that subject...

Mary Worth. The appearance of the newspaper comic strips’ leading dispenser of advice and bromides on my list will surprise my close friends who know how much I loathe Mary Worth. Most recently, the story wherein a dunderheaded single mom somehow misses every sign that her drug addict son was addicted to painkillers had me rolling my eyes from its start to its “a son needs a mom and here, read the Bible more” finish. How, I asked myself, is it possible no one has terminated Mary and her insipid Charterstone friends with extreme prejudice? When the answer came to me, I realized Mary Worth was a comic strip I wanted to write.

The Charterstone residents are protected because they’re all former government agents. Except they don’t know all their neighbors are also former spooks. Only Mary knows this because she’s the “warden” of this community.

Someone learns Charterstone’s secrets and launches a synchronized strike that takes out all the residents. Except for Mary, the best there is at what she does. Mary survives. She takes off the makeup, padding and wigs that made her look so dowdy. This senior citizen is hot and pissed off. She has failed those under her protection. Even if she must travel around the world to find them, she’s going to take down the assassins...and whoever sent them to dispatch the late residents of Charterstone. Mary’s advice? Don’t get in her way.

Don’t roll those eyes at me. You know that you would totally read this newspaper strip.

The Mole Man. It’s 1963 and the Marvel Age of Comics is beginning. Shunned by his fellow man, brilliant but physically unattractive scientist Rupert Harvey Elder leaves the surface world behind to live in the underground world he has discovered. But when an evil genius named Reed Richards steals a spaceship with three friends, gains fantastic super-powers and threatens the world, Rupert fights to protect the very people who rejected him. It’s a battle for New York like you’ve never seen!

Think about the heroes of the pre-hero Marvel monster adventures. They were mocked for their lack of physical strength or for being mild-mannered or for being nerds. Yet they managed to defeat some of the greatest threats our planet ever faced. Is the notion of the Mole Man as a hero that different from the earlier tales...or from Ben Grimm? The best Marvel heroes have always been outcasts in one way or another.

The Newsboy Legion. This series about four newsboys and the police officer/costumed hero who befriends them ranks with Captain America as my favorite Joe Simon and Jack Kirby creation. I used to collect their Star Spangled Comics appearances back in the day. If I were writing these characters, I would set my stories in the early 1940s and have a ball researching the New York City of that era.

Ranma Saotome. Ranma 1&2 was the first manga/anime series I read. It’s endlessly inventive and hilariously funny. Like Kitaro, who I wrote about on Tuesday, I’d like to bring the Saotomes, the Tendos and their wacky supporting cast to the USA for an extended visit.

Rawhide Kid. You knew this Marvel western hero, brilliantly created by Stan Lee and Jack Kirby and brilliantly continued by my friend Larry Lieber, had to be on my list. My many “Rawhide Kid Wednesday” bloggy things should have tipped you off.

If I were writing new Rawhide Kid comics for Marvel, I’d ignore any stories after Lieber’s run. I’d probably explore some of the ideas readers wanted to see back then, such as the Kid going overseas or becoming a lawman or settling down. I’d also use a whole bunch of guest heroes and guest villains.

My Rawhide Kid back-up plan, which I’ve actually done some work on, is to strip the character down to the non-Marvel elements that made him my favorite of the company’s western hero and create a brand-new character in a brand-new setting.

Sailor Moon. Many years ago, Carl Gafford pitched Topps Comics on getting the license to do Sailor Moon comics. As someone who’d been watching the Americanized cartoons with my young daughter Kelly, I was more than happy to sign on as writer if Topps had gotten rights to do this comic-book series. I still love these characters, so I’d be up for writing them today. My aim would be to retain the charm of the original cartoons and update them for the modern audience.

Shako. Attempting to imitate the success of the killer shark series “Hook Jaw” in the infamous British weekly Action, 2000 AD launched “Shako”. The title star was a killer polar bear who had swallowed a deadly bio-weapon. Shako liked long walks on the arctic ice and slaughtering the CIA agents hunting him. Shako appeared in 2000 AD Progs 20 to 35, dying in the final episode. Given my love of cheesy monster movies featuring nature turning on mankind, and given that I’ve figured out how to revive Shako, I think I’d be a natural to write a new Shako series for 2000 AD. Which would also fulfill my dream of writing for said legendary weekly.

That’s all for today. Come back tomorrow for the finale of my long answer to the question of what characters/series I have never written that I would like to write. See you then.