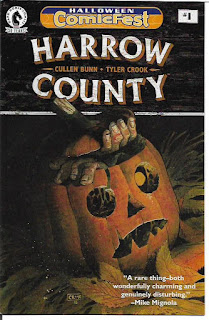 Halloween ComicFest is a smaller and spookier version of Free Comic Book Day. My pals at Stormwatch Comics sent me full-sized and mini-sized comics from the event. I’m attempting to read and review all of them before the end of the year.

I look for certain things when I review Halloween ComicFest items. Is the material in the comic well-written and well-drawn? Does it present a good enough chunk of the comic or graphic novel to entice a reader into buying the comic? Is it reader-friendly enough to welcome rather than confuse a new reader?

Harrow County #1 [Dark Horse Comics] is a full-size special edition reprint of the first issue of the Cullen Bunn/Tyler Crook series. The inside front cover is a house ad for the four collections that have been published to date. The ad copy gives new readers a decent leg-up on the fictional world before them.

Here’s the blurb for the first volume:

Emmy always knew that the deep, dark woods surrounding her home crawled with ghosts, goblins, and zombies. But on the eve of her eighteenth birthday, she learns that she is connected to these creatures—and to the land itself—in a way she never imagined.
The 27-page story is both creepy and evocative. Readers will get a sense of the place wherein the stories are set. They will see the beauty of the place and the horror that lies not very far beneath that bucolic beauty. The first-rate writing and art easily won me over. I’ll be checking out the collected volumes.

RATING: Excellent. This is what a free comic book should do. It’s a great story in a package that will likely convince many readers to follow the series regularly. 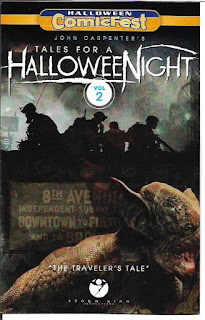 From Storm King Comics, the mini-sized John Carpenter’s Tales for a Halloweenight Volume Two (A Traveler’s Trail) presented a 13-page  story written by publisher Carpenter and drawn by Dennis Calero. Apparently, the horror anthology from famed filmmaker and his wife Sandy King Carpenter features stories by impressive comics creators like Steve Niles, Jimmy Palmiotti and others. But you wouldn’t know that from his Halloween ComicFest issue. It doesn’t even mention or show covers of the anthology series. It just plops out this rather unimpressive story and leaves to the reader to learn more if said readers choose to go to the effort of an online search.

RATING: Poor. The story is well-drawn, but the plot and writing are journeyman. It’s an absolute failure in terms to getting a reader to buy the anthologies because it doesn’t tell the reader anything about them. Indeed, I didn’t even know this John Carpenter was the rightfully celebrated movie maker until I did my online research. What’s the point of a giveaway comic book if it doesn’t help sell comic books? 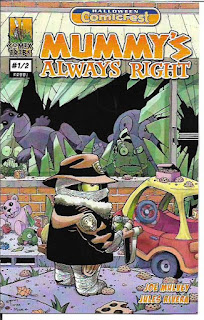 Mummy’s Always Right #1/2 [Comix Tribe] is a 12-page story about a young mummy trying on Halloween costumes. No, really, that’s pretty much all there is to the story. Writer/artist Joe Mulvey delivers some cute single-page drawings of the kid’s various costumes. There is a moral of sorts...

On Halloween, we all dress up as someone we’d like to be. Well, there’s nothing I’d want more than to be Super Me!

...but that’s a thin pitch for whatever Comix Tribe is attempting to sell here. The giveaway lacks copyright notices or an indicia. However, we do get the URL of a “Mummy’s Always Right” website that offers a free download of the book...and nothing else. The single page site says the book costs $15 in stores, but has no information on how to order a physical copy of the book.

RATING: Fair. Mulvey’s art is why I didn’t give this free comic a lower rating. But as a means of attracting new readers, this is a dismal failure. 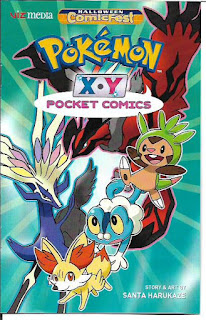 Pokemon Pocket Comics: X*Y Halloween Comic Fest Edition [Viz Media] is a 16-page mini-sized issue with story and art by Santa Harukaze. The inside front cover is a house ad for full-size volumes of the series with a succinct description thereof:

A Pokemon pocket-sized book chock-full of four-panel gags, Pokemon trivia and fun quizzes based on the characters you know and love!

Bang! That’s everything you need to know. The gags, trivia and such are clearly aimed at younger readers that love Pokemon madly. The material isn’t aimed down at those younger readers. It invites them to join in on the fun. It’s a charming mini-comic and, if I knew a Pokemon-loving youngster, I’d definitely consider getting some of the full-size books for them.

RATING: Excellent. The material is well-done. The mini-comic tells you all about these Pokemon pocket comics. It’s entertaining stuff that promotes the source material incredibly well. 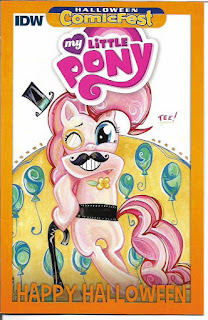 My Little Pony: Halloween ComicFest [IDW] is a full-size comic book featuring characters I don’t quite understand in a universe I don’t understand. That doesn’t mean I don’t think it would be good for me to learn about all this equine enchantment. It just means I’m not there yet. I’m still trying to figure out how these ponies built a civilization without fingers.

Seriously...this seems like a perfectly charming and fun comic. The 22-page story by Rob Anderson reads well and has relatable heroes and situations. Artist Amy Mebberson visualizes the story well and has a cute peppy style. Colorist Heather Breckel keeps the scenes bright, darkening them only when the story calls for it. Though I may not be the target audience for this comic book, I can see the talent and work that went into it.

The issue includes a readers guide designed to looks like a game board and several house ads for My Little Pony collections. If this is a My Little Pony fan’s introduction to the comic books, they’ll be able to find more of the same.

RATING: Very Good to Excellent. Though a bit of a leg-up would be helpful to readers like me who know nothing of My Little Pony, the popularity of the franchise is such that most readers won’t be in the dark. The comics material is good. The house ads should sell a few collections. Well done. 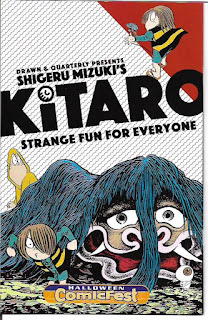 From Drawn and Quarterly, Shigeru Mizuki’s Kitaro: Strange Fun for Everyone is one of my favorites of the Halloween ComicFest issues. I’m already very familiar with this character. Unfortunately, the new reader will be more than a little lost. This full-sized, black- and-white comic book needed to provide background information for the new reader.

The 23-page comics story is complete unto itself and very good to boot. The centerfold is a Kitaro poster with the reverse side being used to promote the series. The back cover also promotes Kitaro. If readers likes this story, they will be able to find more adventures of this strange and delightful little guy.

There are game pages and house ads for other Drawn and Quarterly publications. The inside front cover offers a bit of biographical information on Mizuki while promoting his other works. I have read some of them and plan to read the others.

RATING: Very Good to Excellent. This presentation loses points for its lack of sufficient background on Kitaro and his world, but it scores high marks in every other area. 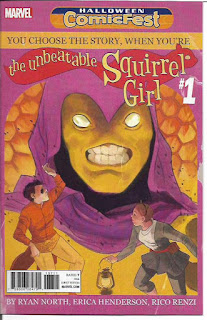 Marvel’s The Unbeatable Squirrel Girl: You Choose The Story No. 1 Halloween Comic Fest 2016 reprints an entire issue of the generally wonderful series. However, modeling a story after the very popular “Choose Your Own Adventure” books doesn’t give new readers a very accurate sampling of the character. It’s a clever effort, but it’s far from one of the best Squirrel Girl adventures. I also think the comic book assumes a familiarity with the character and the Marvel Universe that many readers won’t have.

There are lots of Marvel house ads, including one for the all-new The Unbeatable Squirrel Girl Beats Up the Marvel Universe graphic novel and one for the latest Squirrel Girl collection. I love this character, so I hope readers check out her ongoing series.

RATING: Good. Squirrel Girl herself is the biggest draw here.  If new readers take to her, this full-size free comic will have done what it’s supposed to do. The house ads are also good come-ons for the respective series they promote, but the placement of these ads is often annoying.

That’s all for today. Come back tomorrow for the conclusion of my Halloween ComicFest reviews.