ABOUT COMICS AND HISTORY 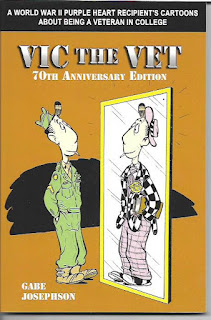 My friend Nat Gertler’s About Comics publishes comics and comics-related books as well as historical material that usually but not always has something to do with comics and/or cartooning. If that sounds a little less than exact, it’s because the company has put out books ranging from Charles M. Schulz’s It's Only a Game: The Complete Color Collection and remembrances of the beloved Schulz by his friends to comic-book reprint volumes to books about creating comics to Adult Coloring Books of the 1960s. Oh, yeah, and in its spare time, Gertler and About Comics created 24-Hour Comics Day, an  international celebration of comics creation that generated tens of thousands of pages every year.

Earlier this week, Nat sent me three of his most recently published  books. They were so unusual and, far more important, so interesting I read them within a day of their arrival.

Vic the Vet by Gabe Josephson [$9.99] is a new edition of a World War II Purple Heart recipient’s college cartoons about going back to school on the G.I. Bill. The collection was originally published by the Syracuse University Press in 1947. This new edition includes an informative introduction by Gertler, historical notes that put the cartoons in context and a cartoon that wasn’t included in the original volume. The book had me at its back cover blurb:

SURE, THEY BEAT THE NAZIS, BUT NOTHING PREPARED THEM FOR THE HORRORS OF...ACADEMIA!

The cartoons, featuring a look-alike of Josephson, were taken from the Daily Orange, the campus newspaper of Syracuse. They are funny snapshots of their times. One might show its soldier protagonist as he tries to adjust to being a college student. The next shows the fashions or the “customs” of the day. Josephson’s talents are being formed in these single-panel cartoons which also reveal some of his artistic influences, such as Dr. Seuss.

Digression. Has there been a collection of college life cartoons over the decades? When I look at Josephson’s work and think of the campus life of my children in the past decade, I wonder how those institutes of higher education got from there to now, and how they reflected all those decades. End of digression.

Coming in at just over a hundred pages, Vic the Vet was a very cool way to spend a couple hours. After his graduation, Josephson went on to become a cartoonist and book illustrator for such clients as Walt Disney Productions, the New York Times Book Review and Sesame Street. His The Skier’s Coloring Book is reprinted in the afore-mentioned Adult Coloring Books of the 1960s. I’m forever fascinated by comics I never knew existed. If you’re of a similar historical bent, I’m sure you’ll enjoy this book. 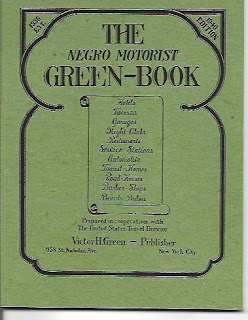 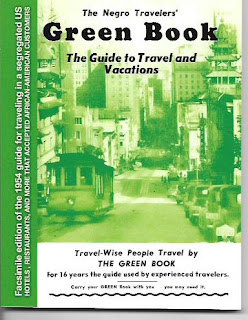 Also from About Comics...

Published by Victor H. Green, The Negro Motorist Green-Book: 1940 Facsimile Edition [$8.99] and The Negro Travelers' Green Book: 1954 Facsimile Edition [$8.99] aren’t comics-related. These 5 by 6.5 inches books were originally prepared by Green, who was “a New York mailman when he decided to start a travel guide for folks like him, the rising African-American middle class with the means to travel. His success with publishing the series, known to his customers simply as "the Green Book" led to him starting a travel booking agency aimed at the same market.”

Some history about these fascinating books:

The Green Book, first published in 1936, was [for folks] having the finances and vehicle for travel but facing a world where social and legal restrictions barred them from many accommodations. At the time, there were thousands of “sundown towns,” towns where African Americans were legally barred from spending the night there at all.

There was no Internet to guide Green in creating his travel guides. The United States Travel Bureau was one of his sources, but he also relied on reports from his customers. The thinness of these books (respectively, 52 and 88 pages) reveals the difficulty of his task and the paucity of African-American acceptance by whites in those times. I think my heart sank when I saw how few accommodations were available in even a large city like my native Cleveland. Just as my heart sinks when I see so many open racists appointed to positions of power in the Peepee Cheeto administration. Will this battle ever be won?

When the weather gets nicer, I hope to spend a day visiting some of the Cleveland sites listed in these books. I don’t expect to find the original structures, but I think it’ll be time well spent. If we do not remember history...

I recommend these guide books, especially if you’re interested in African-American and U.S. history.

Posted by Tony Isabella at 4:09 AM