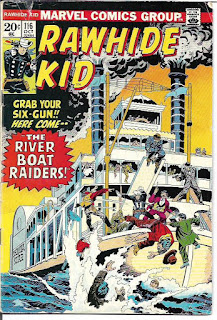 The Rawhide Kid is my favorite western comics character and one of my favorite comics characters period.  Something about the short of stature (but big on courage and fighting skills) Johnny Clay spoke to the short of stature (but big on comics-reading skills) teenage Tony Isabella.  After rereading the Kid’s earliest adventures when Marvel Comics reprinted them in a pair of Marvel Masterworks and an Essential Rawhide Kid volume, I wanted to reacquire every Rawhide Kid comic, reread them and write about them in this bloggy thing of mine. This is the 102nd installment in that series.
The Rawhide Kid #116 [October 1973] has a cover by Jack Kirby with Frank Giacoia inking. The cover is reprinted from Rawhide Kid #47 [August 1965]. This is the start of the all-old Rawhide Kid. There will be no more new stories in this title, though one remaining new tale by Larry Lieber will appear in the one-shot Western Team-Up.

This issue reprints “The River Boat Raiders!” (17 pages), written and drawn by Lieber with lettering by Art Simek. This is the third time this story has appeared in a Marvel western comic. It also ran in The Mighty Marvel Western #4 [April 1969]. That it was reprinted for the second time in four years is a pretty good indication this reprint mag wasn’t getting much attention. I wrote about this tale in February 2013 and you can read that bloggy thing here. 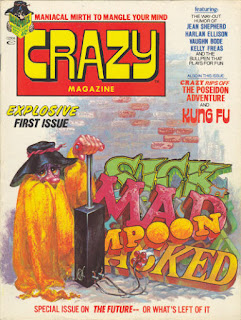 Thirteen pages into the story, we get a half-page house ad for the first issue of Crazy Magazine. The black-and-white reproduction of the full-color cover by Kelly Freas shows the Nebbish (the Alfred E. Newman of the magazine) about to blow up the logos of Cracked, MAD, National Lampoon and Sick. The ad copy claimed Crazy was “the humor mag that 4 out of 5 mad doctors recommend!” 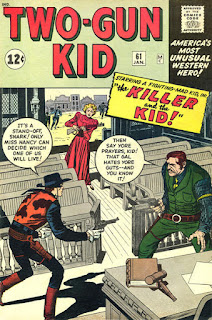 The Rawhide Kid reprint was followed by a two-page “special Two-Gun Kid feature!” Written by Stan Lee, penciled by Jack Kirby, inked by Dick Ayers and lettered by Jon D'Agostino, ““Two Lives Has He!” contracts “eloquent, cultured, scholarly, gentle” lawyer Matt Hawk with his “two-fisted, cold, ruthless” masked identity. This feature originally appeared in Two Gun Kid #61 [January 1963]. Even making allowances for that being just the second issue of the new Two-Gun Kid’s run, the descriptions for both Hawk and his masked identity aren’t very accurate.

The half-page Marvel Bullpen Bulletins plugged the usual variety of Marvel magazines and comic books: Crazy, the new Son of Satan strip in Marvel Spotlight, the new issues of Vampire Tales and Monsters Unleashed, the Recorder appearing in Warlock, Kraven the Hunter in Daredevil, Dr. Spectrum in Iron Man, a clash between Spider-Man and the Sub-Mariner in Marvel Team-Up and Savage Tales #2.

But there is one more items of particular interest to me. Here it is in full:

ITEM! Oh, yes - we almost forgot! We want to apologize for accidentally misleading a few of you in a recent Bullpen Bulletins, when he mistakenly reported the cover price of our new HAUNT OF HORROR digest-size magazine at 60 cents instead of the correct 75 cents. We mixed it up for a moment with MONSTER MADNESS - which itself has just added fifteen coppers to its price and a bunch of pages to its format, to become (under Roy and our hard-working new recruit TONY ISABELLA) a bigger bargain than ever! If you don’t believe us, pick up our fabulous fourth issue - which zeroes in on none other than the immortal KING KONG - and see what we mean!

That’s the first time I was mentioned in the Bullpen Bulletins. I didn’t know about it until I saw the finished page. It would still be another month or so before I got my official Marvel nickname.

As usual, the rest of the page was the usual half-page house ad for FOOM, the Friends of Ol’ Marvel fan club.

The last editorial page in the issue was a “Marvel Comics Survey.” Conducted by Mark Clements Research Inc. It asked a whole bunch of questions. You didn’t have to sign your name to the survey. Even if I weren’t working at Marvel, I would have never filled this out and sent it in. I mean, why would I cut a page out of one of my comic books? Here’s the survey: 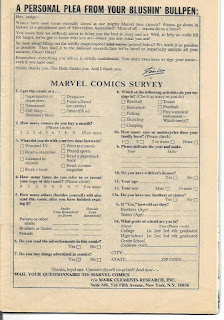 Normally, I’ll be covering two reprint issues of The Rawhide Kid in each of my “Rawhide Kid Wednesday” columns. However, because of all the other stuff I have to do before I leave for Pensacon tomorrow, you’re only getting one this time around. That will also hold true for next week’s RKW. Two weeks from now, I’ll write about Western Team-Up #1, which featured the last Rawhide Kid story by my friend  Larry Lieber story. Three weeks from now, if all goes as planned, I’ll start covering two reprint issues each Wednesday.

The bloggy thing will resume on Tuesday, February 21. Join me then for a preview of my appearance at the Great Lakes Comic-Con, Friday and Saturday, February 24-25, in Warren, Michigan.

Posted by Tony Isabella at 1:27 AM