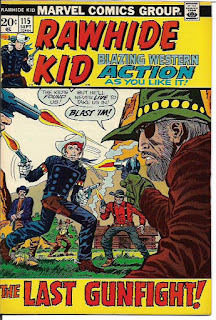 The Rawhide Kid is my favorite western comics character and one of my favorite comics characters period.  Something about the short of stature (but big on courage and fighting skills) Johnny Clay spoke to the short of stature (but big on comics-reading skills) teenage Tony Isabella.  After rereading the Kid’s earliest adventures when Marvel Comics reprinted them in a pair of Marvel Masterworks and an Essential Rawhide Kid volume, I wanted to reacquire every Rawhide Kid comic, reread them and write about them in this bloggy thing of mine. This is the 101st installment in that series.

The Rawhide Kid #115 [September 1973] has a cover by Larry Lieber with inks by Frank Giacoia. Inside, “The Last Gunfight” (14 pages) is written and penciled by Lieber, inked by George Roussos, colored by Linda Lessmann and lettered by June Braverman. It’s the last new Rawhide Kid story that will appear in this title.

A lawman in the “twilight” of his life is practicing his shooting skills with his young son Davy. Sadly, the man’s eyes are weak and his hands have become unsteady. He plans to hang up his badge in a few days. By chance, on their ride back to town, the sheriff spots and recognizes the Rawhide Kid.

Knowing he’s no match for the wanted fugitive, the sheriff sets up a trap. Dave pretends to have a broken leg. When the Kid dismounts to help him, the lawman gets the drop on him from behind. The Kid unhitches his gun belt and is taken prisoner. He’ll be kept in the town jail until the territorial marshal can get him.

The Kid seems strangely resigned to his fate. He asks the sheriff if it matters to the lawman if he’s innocent. The sheriff says it doesn’t:

I’m just a lawman...not a judge and jury! It was my job to bring yuh in and I did it! Period!

Elsewhere, gunman Carl Kane has escaped from his captors. His gang is waiting for him with a horse. He tells his men that he’s got a score to settle. With the same sheriff who caught the Rawhide Kid and who caught Kane years ago. If you’re thinking just a little bit “High Noon,” you’re on the money.

Two good men are facing major life-changing events. The sheriff is going to face Kane alone. Not one of the men in the town will stand by him. They say this is the sheriff’s fight. And, in his cell, the Kid is facing a life in prison.

The Kid decides he must break out of the town jail. He fakes having a burst appendix, tricking the sheriff into coming into the cell.  He knocks the older man out, grabs his guns and heads for freedom. When the sheriff comes to, he knows he can’t go after the Kid. He has to stay and face Kane and his gang.

The fleeing Rawhide Kid spots the afore-mentioned gang heading for the town. It gives him pause:

I thought I could do it! I thought I could vamoose and let a hard-nosed old lawman handle his own problems! But I can’t! I can’t just ride off and let that sheriff die in the dust! I’ve got to go back to Rustwood!

Digression. What kind of town names itself “Rustwood”? First off, wood doesn’t rust. Second, wouldn’t you want a more inviting name for a town? Unless the town was founded by someone named Rustwood  who wanted to share his misery. End of digression.

The townspeople are surprised the Kid is back. The lawman doesn’t believe he’s there to help and thinks he’s working with Kane. But the sheriff realizes Rawhide is all he’s got.

Things move fast. At the sheriff’s cabin, Kane kidnaps Davy. One of his men comes to town and tells the lawman to come to Puma Pass to face Kane and his gang. The sheriff despairs, but the Kid comes up with a plan.

It’s conveniently raining. The Kid covers his clothes with a poncho and wears the sheriff’s star. He fools Kane and the gang just long enough to get Davy to cover. That’s when the shooting starts.

The Kid takes out Kane’s three men. He’s facing Kane. That’s when the lawman tells Rawhide to stand down:

I couldn’t have taken on the whole gang! But now that you’ve evened the odds...Kane is mine!

Kane draws first and wounds the sheriff in the shoulder. The lawman raises his own gun and shoots Kane dead.

You won, sheriff! Not with speed or fancy tricks...but with a raw courage that age couldn’t kill!

Now what happens between you and me?

Nothing! It’s no longer muh job to bring yuh in! Yuh see, muh term in office ended a couple minutes ago! I’m no longer the sheriff of Rustwood. I’m just an ordinary citizen!

An old man who has fought his last gunfight. A man who wants only peace and quiet from here on out.

The Kid hopes the retired lawman finds it. He hopes they both do. It’s a satisfying ending for the story and, in some ways, even for the series.

The Rawhide Kid rides off to face the challenges of staying alive and staying free, always searching for a happiness and a peace he may never find. His legend lives on.

This story has never reprinted in the United States, but there was a French-Canadian edition of this issue. I don’t think Lieber knew this was the last new Rawhide Kid story for the title. Indeed, he was already working on another story which would end up in Western Team-Up #1 [November 1973], a one-shot that wasn’t actually a team-up book. Additionally, this issue’s letter column does not mention that the title is going all-reprint.

Bloggy note. I’ll be writing about Western Team-Up #1 as soon as I can get a copy of the issue. Watch for it.

Just before the last page of “The Last Gunfight,” there’s a half-page house ad for Savage Tales #2, which is said to be on sale June 26. The 76-page, black-and-white magazine features the first part of “Red Nails” by Roy Thomas and Barry Windsor-Smith, a non-series story by Gerry Conway and Gray Morrow and other features. The issue also reprinted the Roy Thomas/Bernie Wrightson story from just two years prior and a Crusader story by Stan Lee and Joe Maneely from Black Knight #1 [May 1955]. 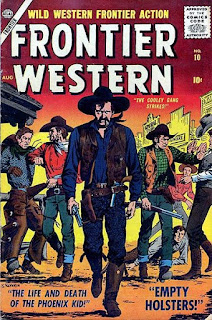 This issue’s non-series back-up story is “The Life and Death of the Phoenix Kid” (5 pages) with art by Jay Scott Pike. The writer has yet to be identified, but the tale originally appeared in Frontier Western #10 [August 1957].

A young man - “You’re Pete Bannock’s boy! You wouldn’t hold me up!” - takes up crime, robbing a general store and taking the name “The Phoenix Kid.” He vows folks who get to know that name from one end of the territory to the other.

Bannock holds up stores and stagecoaches again and again. He shoots and, though the story isn’t specific about this, likely commits a few murders along the way. His wanted posters, offering a reward of $1000, are everywhere. He’s kept his vow.

But when he robs a mail stage, he commits a federal offense. Now he is being pursued by government lawmen. He flees through the desert, but the trip takes its toll on him and a horse. Needing some fresh transportation, he sneaks up on a campfire, clubs the one man there and steals the man’s pony.

Bannock is moving faster than the posse, but the lawmen remain on his trail. He thinks stealing the pony was good luck because it’s faster than any horse he’s ever ridden. That’s because it is not, as he learns, a “paleface horse.” His instructors are two braves. He tries to bribe them. They aren’t interested.

Minutes later, the braves rode off, taking the stolen pony with them...

The contents of his saddlebags were scattered by the desert wind, while a lone coyote howled at the cloud-tossed moon...

The posse found him the next day, and they put him to rest with the others on lonely Boot Hill...
His tombstone reads:

The Phoenix Kid
Violence was his way
So he lived
So he died!

Though the story is so straight-forward as to be uninteresting, I thought the Pike art was first-rate. The scripting had its moments, such as in those last panels quoted above. This was the only time this tale was reprinted in the United States.

The half-page Marvel Bullpen Bulletins plugged a variety of Marvel magazines and comic books: Savage Tales, some annuals (Spider-Man, Fantastic Four, Conan the Barbarian), Dracula Lives, Tales of the Zombie, Crazy Magazine and Strange Tales starring Brother Voodoo. There was also a brief obit for Bill Everett, the creator of Sub-Mariner, who passed away on February 27, 1973. The rest of the page is the usual half-page house ad for FOOM, the Friends of Ol’ Marvel fan club.

The “Riding the Trail with Rawhide” letters column was once again a half page of very small type. There were three missives from readers. Robert Bendt of San Francisco praised Rawhide Kid #112, especially applauding supporting characters Cole and Nora. I also liked those two characters.

M. Posey (no address( called Marvel out for the racism in Rawhide Kid #110. Bloggy readers will recall I had problems with the issue as well. In its response, Marvel speaks to the times in which this story was set, mentions sympathetic treatment of Native Americans in Red Wolf and Man-Thing, and promises to be more careful in the future.

“Darango” of Alden, New York loves westerns, but has never read a western comic book because he thought they would make westerns look like the Three Stooges. But he loved Rawhide Kid #109 and plans to buy future issues of the book. He also requested a story explaining how the Kid got his horse Nightwind.

The rest of the page was a house ad for Dracula Lives! #3 [October 1973] which features new stories by Marv Wolfman with John Buscema, Gerry Conway with Alfonso Font, and a Dracula/Solomon Kane battle by Roy Thomas and Alan Weiss. There were also reprints of vampire comics from the 1950s and the usual text features.

The next issue of Rawhide Kid would commence the title’s new status as an all-reprint title. If all goes as planned, the next edition of “Rawhide Kid Wednesday” will feature that issue and at least one more reprint issue.

Posted by Tony Isabella at 6:21 AM