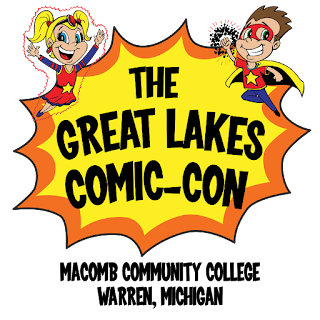 Pensacon Comic-Con was almost certainly a wonderful weekend, but, since I’m writing this three days before the start of that event, I’m making an educated guess. You can look forward to my full con report in the next week or so. If all went according to plan, I returned home from Pensacon late yesterday afternoon and started getting ready for my next convention appearance.

Bloggy old Tony will be a special guest at the Great Lakes Comic-Con, Friday/Saturday, February 24-25, at Macomb Community College in Warren, Michigan. The convention runs from 5-9 pm on Friday and 10 am to 6 pm on Saturday.

Here’s the quick take on the event from its website:

The Great Lakes Comic-Con, or GLCC, is a comic, toy, and collectible event that runs annually in the Metro-Detroit Area (Michigan). The goals of GLCC are to provide a venue for collectors and dealers to get together, buy/sell some of their favorite collectibles, and support children’s literacy, as well as other child-related charities.

For The Great Lakes Comic-Con, we will be supporting Reading is Fundamental. Reading Is Fundamental (RIF) is the largest children’s literacy nonprofit organization in the United States. The goal is a literate America in which all children have access to books and discover the joys and value of reading.

There over 5000 people at last year’s GLCC and those who attend the convention this year will find a pretty spiffy guest list including such luminaries as Nicholas Hammond, the star of the Spider-Man TV show of the 1970s, and WWF Hall of Fame wrestler Jack “the Snake” Roberts. Hmmm...I wonder if we could convince them to react that  classic “masked Peter Parker” wrestling scene from Amazing Fantasy #15. I’ll just stand back here when you ask them.

Three other media guests. Paul Soles was the voice of Spider-Man in the 1967-1970 cartoons and Hermey The Elf in Rudolph the Red-Nosed Reindeer. Tom Cook was an animator and director at Hanna-Barbera and Filmation and has worked on any many other films and projects as well. Movie and TV actress Lydia Graber will also be there. Her fascinating resume includes being an Ewok in Star Wars: Return of the Jedi.

In addition to dozens of great comics dealers and other exhibitors, the convention will also feature: panel presentations, cosplay, fan organizations, face painting, balloon sculpture, free board gaming, free arcade gaming, a Magic tournament and, on Friday only, the amazing Squirrel's Creations.

I’ll be appearing on two panels during the event:

“Tony’s Tips Live” (Friday, 7 pm) is a live-action version of the bloggy things and columns I’ve been writing for decades. I’ll have some of those afore-mentioned tales with which to regale you; talk about comic books, the real world and more; and answer those questions I can answer without violating any of the seeming dozens of contracts I have signed in recent years.

"Misty Knight, Iron Fist, and Netflix" (Saturday, 3 pm) will team my collaborator and long-time friend Arvell Jones for a panel that will cover the above and more. We might even argue about which of us Simone Missick likes best. Hint: it’s me.

When I’m not on panels or roaming the convention looking for great stuff to buy, you can find me at Table 901. I’ll be selling Black Lightning Volume One and other Isabella-written items, along with a selection of other comics and books and what-have-you.

Want me to deface your Isabella-written item with my signature? I can do that for you. There will be no charge for my autograph and no limit on how many items I’ll sign. However, on the off chance I have a line of fans waiting for me to sign their comics and you’ve brought me more than ten items to sign, I’ll sign the first ten and then ask you to step to the end of the line so I can sign for your fellow fans and get them on their way.

If you’re too shy to ask me questions at my panels, I’ll be happy to answer them for you at my table. There are some questions I can’t answer at the present time, but I’ll do my level best to accommodate your quest for knowledge.

I’m really looking forward to attending the Great Lakes Comic-Con, seeing so many old comics pals and making new ones. I hope you get a chance to attend the convention and see me.

Posted by Tony Isabella at 6:01 AM