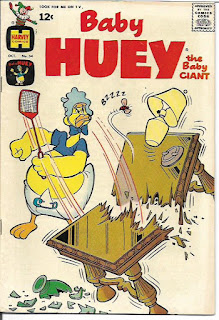 Baby Huey, a huge duckling created by Martin Taras for Paramount Pictures' Famous Studios, became a cartoon star during the 1950s. He appeared in 13 theatrical cartoons. Some of those cartoons were shown on television. Though Huey and many other Paramount cartoon  characters were already appearing in assorted titles published by Harvey Comics, the publisher purchased the rights to the Paramount cartoon stars in 1959.

Baby Huey the Baby Giant #54 [October 1963] was a typical issue for Harvey Comics. I never bought a Baby Huey comic as a kid, though I did sometimes buy the more fantasy-oriented Casper, Hot Stuff and their supernatural friends. I also bought occasional issues of Sad Sack and Richie Rich. I shied away from the Harvey titles starring kids with mental disorders (Little Dot) and most of the other kid titles (Baby Huey, Little Audrey, Little Lotta). As a result, this issue, which has never been indexed by the Grand Comics Database, was brand-new to me.

Sid Jacobson was almost certainly the editor of this issue. Taras is listed at Who’s Who of American Comic Books 1928-1999 as having penciled and inked Baby Huey stories in the 1960s, so some or all of this issue’s tales might be his work.

For today’s “July 1963" installment, I’m going page by page through this issue. I’m foregoing my usual SPOILER WARNINGS because I doubt this material will ever be reprinted and I want to give you a better feel for the issue’s contents.

The cover has Baby Huey shattering a table with a flyswatter. This is pretty much Huey’s thing, creating destruction wherever he goes because he hasn’t figured how strong he is or how to control that strength. Or maybe he’s just angry because he has to wear that dumb bonnet and diapers all the time. I don't even want to think about changing that diaper.

The inside front cover is an ad for the Cheerful Card Company. It costs nothing for you to try and, if you sell only a hundred boxes of their “Pearl Splendor Christmas Card assortment,” you can make $75. That would be $588.25 in 2017.

The issue opens on a silent, single-page gag strip. At the seaside, Baby Huey is trying to pole vault over a fence. The pole collapses under him. An older duck wearing a sea captain’s hat yells at the befuddled duckling before showing him that the “pole” is actually an antique retractable spyglass. The longest retractable spyglass ever made since it seems to extend to a length of six feet or more. I am skeptical.

Harvey comic books of this era usually began with a singe-page gag like this. Perhaps the publisher felt a quick laugh would entice a browsing reader into buying the comic book. More likely, it was so they could sell an advertisement on the second page of the comic. I still remember - with a combination of hilarity and horror - how Marvel’s ad reps one tried to convince Roy Thomas how wonderful it would be if they could sell the first page of our comics to their advertising clients. I wish I were making that up.

The second page of the comic is a full-page ad for Goodyear bicycle tires. It shows a young man delivering newspapers on his bike with the slogan...

“Mama’s Baby Boy” (5 pages) has Huey’s horrible parents - more on them soon - arguing over spanking their child. Papa doesn’t want to do it, but tells his boy that he will spank him the next time Huey does something naughty.

Mama takes Huey shopping. Huey proceeds to nearly wreck their car, rips up a parking meter because he wants a dime to buy ice cream, takes $8.93 worth of ice-cream cones from a vendor ($70.43 in 2016 dollars) and visits destruction on a department store. This is one of Huey’s signature moves: destroying stuff. When they get home, Papa has to spank Huey...and I immediately thought of the Superboy stories wherein Pa Kent tried to spank his super-son. A crying Huey runs to his mama.

HUEY: I got a nice mama, but I am mad at my papa, ‘cause he spanked me and I didn’t do anything!

Buzzy the Funny Crow appears in a two-page story possibly drawn by  Taras. He tricks Katnip into fighting Mauler Manx to win $500. The addled cat thinks Mauler is a midget, the same size as the poster advertising the challenge. Mauler is not a midget. Katnip gets the crap beat out of him, but accidentally knocks out the fighter as he himself goes down. Since he half-won, he and Buzzy get $250. Well, Buzzy gets $125 and Katnip’s share of their winnings pays for the bandages, splints and a cane.

“The Mechanic” (5 pages) is the first of two stories in which Baby Huey’s parents entrust their child’s safety to the clearly crazed Cousin Dimwit. It’s like they want to be free of the kid forever. Anyway, Dimwit walks into an auto repair shop with Huey carrying a gigantic book titled Auto Mechanics Like How to Fix Cars. The shop owner is missing a few spark plugs himself. He figures anyone with a giant book like that must be a good mechanic.

Dimwit and Huey take the car apart and can’t put it back together. Van Waddle says he’ll sue the shop. Dimwit gets fired, but demands a day’s pay. The owner gives him the dismantled Quackillac. He and Huey put it back together and, though it looks hideous, the car can now fly.

The second page has the regular-sized comic books:

The jester-in-the-box that was the Harvey Comics mascot says these are “the funniest comics now on sale at your friendly dealer.”

The next page is a house ad for the Casper TV show. Casper asks his readers to “Look for us on T.V.! Check the channel in your local newspaper!” In very small type, it lists all the stations that air the program.

A panel across the bottom of this page advertises “A new cartoon show on ABC TV with Harvey Funnies." Shown are characters I’ve never heard of: Sammy Spaceman, Bongo, Creepers, Dirty Dan, Silly Stork. The jester-in-the-box says “Look for me every Saturday morning!”

One more full page of house ads before we get back to the comics. This one advertises Hot Stuff with Stumbo the Giant and a quartet of Sad Sack titles.

Cousin Dimwit is back in “The Scootie” (5 pages). Dimwit shows up in a spacesuit with his new scooter. The guy who sold him the suit and the scooter says it was a scooter suit.

Dimwit tells Huey to climb on the scooter for a ride. Papa watches them leave, probably hoping this is the time Huey doesn’t come back home. Dimwit and Huey wreck a train, catch a ride on an airplane in flight, fall onto the loading platform of a real spaceship. Sadly, Dimwit and Huey are removed from the capsule before it blasts off.  Papa asks if they really went to the moon.

DIMWIT: Of course we didn’t go to the moon. The road was too bad!

Next we get two pages of mostly prose stories with a comic strip ad beneath each story. “Big Brother to the Rescue” stars someone named Peter Pekingese. The comic strip has Wendy the Good Little Witch as she sings, dances, cries, flies on her broom and waves her magical wand around.

“The Rule of the Jungle” stars Marty Monkey. The comic strip ad has Richie Rich sharing his first-world problems with the impoverished Freckles.

RICHIE: I have a problem. I’m making too much money. I want to publish an new comic with better stories, better pictures.

FRECKLES: What’s wrong with that?

RICHIE: More readers buy my comic magazine...and I have to print more comics and I have more money!

FRECKLES: But everyone should read Richie Rich comics because you have a better magazine!

Starring Herman (the mouse) and Katnip (the really dumb cat), “You Can Never Television” (5 pages) is the final comics story in this issue. Herman and some mice pals are hanging around inside an empty TV set casing because the set itself is out for repair. They trick Katnip into thinking they are on TV. Then they tell him they will get him on TV for a big chunk of cheese. Then they take a short-cut to the studio and get Katnip into the empty casing. They tell him to start acting and throws pies at him. Katnip is no longer liking this TV deal.

The mice put a mirror in front of the set casing so that Katnip can watch himself on TV. He looks at his pie-covered face and decides it’s hilarious. No wonder the audience is laughing.

The mice tell Katnip the set is actually out for repairs. It takes him a couple panels to figure out he’s been tricked. Meanwhile, the repairman puts the repaired set back in the casing. Katnip charges at it and bounces off. Herman laughs.

KATNIP: I should have trusted you, Herman...

HERMAN: You mean you’re not going to chase me?

KATNIP: I ought to be comin’ on soon and I don’t want to miss me!

The rest of the issue consists of paid advertisements that we have discussed in previous installments of this series. You can buy “100 Toy Soldiers” for $1.25. You can get free new issue stamps. You can get 104 Kings Knights for $1.49.

The inside back cover ad is Wallace Brown Inc. wanting to sign you up to sell its Christmas card assortments. The back cover suggests you “Team up with Dad for B-B gun fun indoors!”

Hmm...maybe Papa and Mama should buy one of those for Huey.

That’s all for this installment of “July 1963.” More installments are in the works even as we speak.

Posted by Tony Isabella at 9:14 AM