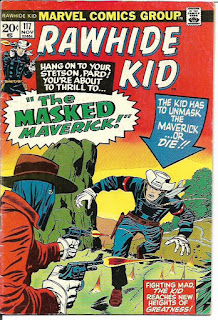 The Rawhide Kid is my favorite western comics character and one of my favorite comics characters period.  Something about the short of stature (but big on courage and fighting skills) Johnny Clay spoke to the short of stature (but big on comics-reading skills) teenage Tony Isabella.  After rereading the Kid’s earliest adventures when Marvel Comics reprinted them in a pair of Marvel Masterworks and an Essential Rawhide Kid volume, I wanted to reacquire every Rawhide Kid comic, reread them and write about them in this bloggy thing of mine. This is the 103rd installment in that series.

The Rawhide Kid #117 [November 1973] has a cover by Jack Kirby with Dick Ayers on the inks. Both the cover and “The Masked Maverick!” (18 pages) are reprinted from Rawhide Kid #44 [February 1965]. The story plot was by Stan Lee, the writing and art were Larry Lieber, and the lettering was Artie Simek. However, to make room for this reprint’s indicia - the earlier issue had the indicia on the inside front cover of the comic book - the first page art was cut off just below Lieber’s credits. I wrote about this story in January, 2013, and you can read that bloggy thing here.

This was the second time the story had been reprinted in under four years. It also ran in The Mighty Marvel Western #5 [June 1969]. As I recall, when Rawhide Kid first went all-reprint, there wasn’t a lot of attention paid to the title by the editorial and production departments. Which is why, looking through the issue for the first time since its original publication, I was surprised to see it had a brand-new letters column.

The “Ridin’ the Trail with Rawhide” column is a half-page of teeny-tiny type. Paul Cipriano of Southbury, Connecticut really loved my pals Larry and George Roussos’s art on Rawhide Kid #112. Gringo of Elmsford, New York had lots to say: some compliments and some not-remotely-compliments. Matt Mitchell of Clyde, Texas wanted to know how Larry got started and the steps involved in drawing the western heroes. Marvel’s responses to these questions included a entreaty to readers to write to the title, which was downright cruel given the new all-reprint status of Rawhide Kid. Except...

I’m guessing this letter column was originally put together for an issue with a new Rawhide Kid story, probably the one that appeared in the one-shot Western Team-Up that came out in the same month as this issue. Considered that informed speculation since I was not involved in the production of these issues. 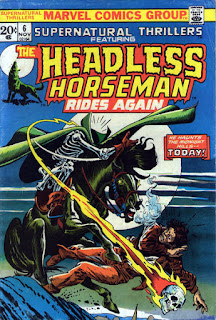 The bottom half of this page featured a house ad for Supernatural Thrillers #6. In that issue, “The Headless Horseman Rides Again!” (20 pages) was a modernization of the classic spooky icon by Gary Friedrich, George Tuska and Jack Abel. I don’t remember the actual story, but I do remember reflecting, during my stint writing Ghost Rider that this new Horseman might make an interesting opponent for Johnny Blaze.

The “Marvel Bullpen Bulletins” run half a page and, for the first time in several months, again include the “Mighty Marvel Checklist” of “color comics now on sale!” The first item plugs new black-and-white titles Savage Tales and Crazy...Brother Voodoo in the pages of Strange Tales...the Son of Satan in Marvel Spotlight...Satana in Vampire Tales...The Thing in Marvel Feature...and the Black Panther in Jungle Action.

The second item is interesting in that it plugs a new color comics title called...Fu Manchu. Obviously, this morphed into Shang-Chi, Master of Kung Fu. Someone should interview Roy Thomas about what went on between the original concept for the series and what ended up in Marvel Special Edition.

The third item is more plugs. The Avengers/Defenders cross-over in those titles. Roy Thomas and Mike Ploog on Kull the Destroyer. And some dramatic changes in Sub-Mariner.

The Mighty Marvel Checklist mentions 27 different issues. Fantastic Four #140 has “more of the startling secret of Franklin Richards.” Spider-Man #126 has Spidey versus the Kangaroo. Avengers #117 pits the Vision against the Silver Surfer. Marvel Team-Up #15 has Ghost Rider for Spidey’s guest star of the month. Marvel Feature has the Thing duking it out with Iron Man. There’s also a plug for Western Team-Up #1, which I’ll be writing about next week.

The bottom half of the page is the usual house ad for FOOM (Friends of Ol’ Marvel), the official Marvel Comics fan club run by Jaunty Jim Steranko. You could sign up and get a subscription to the club magazine for $2.50 including postage and handling.

This is followed by a full-page paid ad for “A Genuine Spider-Man Medallion-Coin” from Hallmark Minting Service. With its “three-dimensional sculpted image of the world’s favorite web-swinger,” the coin costs two bucks. The price would double with the next few years and, though I have found no completed sales for this item on eBay, I did see auctions starting at $75. 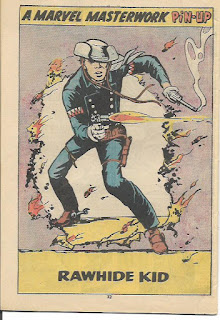 The final interior page is a Rawhide Kid pin-up. The basic image is by Jack Kirby, but the final pin-up seems to be been re-inked and slightly redrawn. My best guess for the second artist is Mirthful Marie Severin who a) could do anything and b) could have run Marvel if she had to. That’s all for today. I’ll be back tomorrow with some more stuff. Then I’ll be taking another few days off while I attend the Great Lakes Comic-Con. Always forward.

Posted by Tony Isabella at 7:30 AM