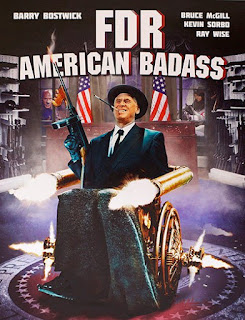 Here we are, continuing our reviews of holiday-themed horror films. What I call “Presidents’ Day” is actually “Washington’s Birthday,” a federal holiday celebrated on the third Monday of each February. Because we wouldn’t want Black History Month to be too black, now would we.

George Washington, more or less the first President of the United States, was born on February 22, 1732. Anyway, the holiday is more commonly known as “Presidents’ Day” and honors all of our American presidents, even those we’d like to forget. Like the current giant Cheeto holding the office.

In most states, the day is also a state holiday under a variety of names and spellings. From here, it’s getting really complicated and I’m going to direct you to Wikipedia for specifics.

The bloggy thing is celebrating Presidents’ Day a week ahead of the official federal holiday to give you more time to take advantage of all those Presidents’ Day sales on carpeting, mattresses and other fine products. Because if you wait until next Monday, all the good stuff will be gone.

FDR: American Badass! [2012] is the first of two Presidents’ Day films we’ll be discussing today. It’s directed by Garrett Brawith, an actor who has appeared in such previous “reviewed by Isabella” movies as Poseidon Rex and Jurassic City. This is the second film he has directed.

The movie was written by Ross Patterson. He plays Southern senator Cleavon Buford in this movie and has other two dozen acting credits at the Internet Movie Database. He has a dozen credits as a writer, but the one I must see is Helen Keller vs. Nightwolves [2015]. On account of...do I really have to explain?

The cast is pretty impressive for a low-budget horror movie. Barry Bostwick plays FDR. Ray Wise plays Douglas MacArthur. Kevin Sorbo is the ghost of Abraham Lincoln.  Lin Shaye is amazing as Eleanor Roosevelt, as is the great Bruce McGill as Louis, close friend and confidant of FDR.

The IMDb describes the movie thus:

An outrageous, over-the-top spoof, FDR: American Badass is the untold true story of our country's greatest monster-hunting president!
I’m going to forego the usual SPOILER WARNINGS because nothing that I write here will diminish this movie for you.

FDR gets polio from being bitten by a werewolf. He was attacked by order of Hitler, Mussolini and Hirohito. All the Axis leaders and their staff and, apparently, their soldiers are werewolves. This is the alternative facts version of World War II.

On becoming President, Roosevelt takes the fight to the werewolves. Albert Einstein builds him a weaponized wheelchair. FDR even goes on a combat mission to Europe.

The movie is loaded with crass and often inappropriate humor. It’s rated R for its crude and sexual content, pervasive language, some violence and drug use. There are gags that made me wince, but, when you come right down to it, FDR battling werewolves is pretty cool. Even if the werewolf costumes look like some Halloween store had a really good day.

FDR: American Badass is one of those movies where your mileage will certainly vary. It’s a fun flick with really good acting and some hilarious moments. I enjoyed watching it once, but it’s not a film I would watch again. However, it has made me eager and more than a little frightened to see Helen Keller vs. Nightwolves. That might be a cry for help on my part. 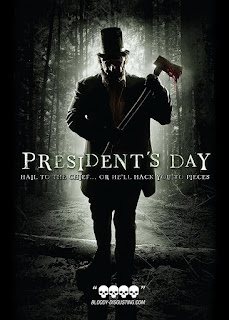 President's Day (2010) is a comedy horror film directed by Chris LaMartina. Everyone who worked on this movie did so for free, which will give you some idea of what to expect from it. Here’s the quick summary from the IMDb:

I’m going to skip the SPOILER WARNINGS on this one because I don’t think my comments will ruin anything for you and because I will not be recommending you watch it even once.

The movie’s setting is a fictional Lincoln High School. The sports teams are the Lincoln Lambs. As in “led to the slaughter,” which is about as clever as this movie ever gets.

The candidates for school president are the usual ones. The front runner is the popular mean girl who looks like she’s at least ten years past high school age. There’s the new girl with a mysterious past. There’s the knows-all-the-angles black kid who runs because he wants to get to know the new girl. There’s the disabled girl in a wheelchair. There’s a school mascot played by Shawn C. Phillips, whose appearance in any movie pretty much guarantees it will suck. And so and so on.
The other characters - principal, police detective, school security guy, teachers, office staff - are as uninteresting as the students. There are a couple decent performances among the cast members, but, for the most part, paying them would have been a waste of the money better (barely) spent on cheesy gore effects.

The nicest thing I can say about this movie is that the identity of the killer in the Lincoln costume is clever. Much to my surprise, President’s Day played fair by giving viewers a solid clue to that identity. The Lincoln costume itself? Well, that looked like it was bought at yet another seasonal Halloween shop.

Since the movie isn’t entertaining, maybe I can make up for it with some trivia about the movie...

The movie was shot in 21 days and all the bathroom scenes were shot in a single day. Probably explains the constipated look on some of the cast’s faces. I’m just being mean now.

The movie was supposed to be filmed at LaMartina’s old high school. When that fell through, it was filmed at a private school. If this movie is ever remade, it should star Betsy DeVos and killer bears. Because...why not?

The film was originally supposed to be a 30-minute segment of some anthology film. It ran 80 minutes. With an estimate budget of five grand. Or about $62.50 per minute and, baby, every penny of that is up there on the screen.

Five different actors played the Lincoln killer. All of them were terrible.

Shawn C. Phillips sent in an audition tape to get his role in this movie. And they still hired him.

One more thing. Do not pay any attention to the Wikipedia entry on this movie. While it gets some stuff correct, the plot seems to be from an entirely different movie. Who knows why?

Maybe I can find some better horror/monster movies for next year’s Presidents’ Day reviews.

Posted by Tony Isabella at 6:02 AM