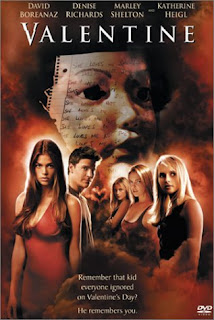 Valentine’s Day is this Tuesday, which gives you two whole days to determine the perfect gift for your valentine and one more day to run around to find something else when you realize everybody else already bought that gift and it cost too much anyway. Ah, romance is in the air, slowly drifting away from you.

What better way to celebrate Valentine’s Day then by talking about two movies filled with holiday-theme death and dismemberment? After all, you have given your heart - or somebody’s heart - to that very special person in your life.

I have two “romances” movies for you today. The first is Valentine [2001] starring Denise Richards, David Boreanaz, Marley Shelton and  Katherine Heigl. Directed by Jamie Blanks, whose short directing resume includes Urban Legend [1998], the movie was loosely based on a novel by Tom Savage, writer of mystery and suspense stories. The screenplay is by Donna Powers, Wayne Powers, Gretchen J. Berg and Aaron Harberts. Here’s a quick summary of the movie from the ever-helpful Internet Movie Database:

Five women are stalked by an unknown assailant while preparing for Valentine's Day.

1988. At a junior high dance, outcast geeky guy Jeremy Melton asks four girls to dance. Three of them shoot him down with cruelty and one tries to be nice about rejecting him. A fifth girl, overweight and unpopular Dorothy, accepts his invitation. She clearly doesn’t want to be seen with him either, so they sneak behind the bleachers and commence to making out. They are spotted by the class assholes.

To protect what wee dignity she has, Dorothy claims Jeremy sexually assaulted her. The assholes strip and beat Jeremy, who ends up in reform school. Yes, that’s messed up and yes, it will come back to haunt all five girls.

Shelly [Heigl], whose response was “In your dreams, loser,” is now a medical student. After a disastrous speed dating event, she goes to her job at the morgue. She gets a nasty, unsigned Valentine’s Day card and is pursued by a killer wearing the same Cupid’s mask that a student wore at the junior high dance. She hides in a body bag, but the killer finds her and slits her throat. She dies lying down. Close enough to “in your dreams” to satisfy her killer’s taste for just desserts.

Two more pertinent points. The killer’s nose bleeds when he kills.  The former classmates he kills all die in manners consistent with their putdowns of him. Though it’s pretty obvious Jeremy is the man behind the mask, the movie actually manages to throw some surprises into the mix.

Because Valentine is readily available, including from the cooler public libraries, I’m going to forego my usual blow-by-blow (maybe that should be stab-by-stab) coverage of the film.

Kate [Shelton], who was the nice girl at the dance, has a troubled relationship with Adam [Boreanaz], a journalist struggling with his alcoholism. They aren’t dating at the start of the movie, but are exploring resuming their romance.

None of the other girls are in good relationships either. Wealthy Dorothy [Jessica Capshaw] is involved with a con man. Lily [Jessica Cauffiel] has a sleazy artist boyfriend. Paige [Richards] is your basic horror movie slut. This gives the movie’s basic model police detective [Fulvio Cecere] plenty of suspects.

Shot in 42 days - Heigl worked just three days and Boreanez did his scenes in under two weeks - this relatively low-budget movie does not seem particularly cheap or rushed. Though a number of folks who worked on the film have apologized for it in later years, I don’t think they have anything to be ashamed of.

The movie is a tight little thriller. The acting is decent. Though the deaths aren’t gory, they are still frightening. The film plays more or less fair with the viewers. Though I mostly saw it coming, I liked the ending of this movie a lot.

Critics have panned this movie, but I found it entertaining. It’s even a movie I’d watch again. Give it a chance.

Here’s some fun trivia from the IMDb...

During the original casting process, Tara Reid, who had previously appeared in Urban Legend (1998), played "Dorothy” and Jennifer Love Hewitt played "Paige." At a cost of $10 million, this is the cheapest film to ever have a Superbowl spot.

Luke Wilson and Jeremy Sisto were considered for the role of Adam.
Moving right along... 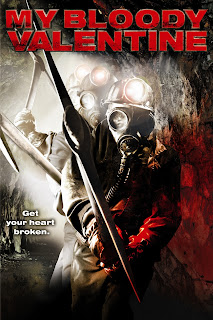 My Bloody Valentine [2009] is an American remake of a 1981 Canadian horror movie of the same name. It was originally released in 3-D, but I saw it in the traditional format on DVD. Even so, some of the 3-D effects are obvious even in 2-D.

This remake stars Jensen Ackles (of TV’s Supernatural), Jaime King and Kerr Smith. It was directed by Patrick Lussier, whose directing resume is all horror films.  The 1981 screenplay and story was by, respectively, John Beaird and Stephen Miller. The 2009 screenplay  by Todd Farmer and Zane Smith.

Here’s the quick summary from the IMDb:

Tom returns to his hometown on the tenth anniversary of the Valentine's night massacre that claimed the lives of 22 people. Instead of a homecoming, Tom finds himself suspected of committing the murders, and it seems like his old flame is the only one that believes he's innocent.
Having never seen the original My Bloody Valentine, I came to this remark without any preconceived notions.

Tom is the son of the mine owner. He makes an error on the job and six miners are trapped in a cave-in. One miner, Harry Warden, kills the others to conserve the air. When they take him out of the mine, he’s comatose. When he wakes up one year later, on Valentine’s Day, he slaughters over a dozen people at the hospital.

Warden then heads to the mine where a party is in full swing. Tom [Ackles] is there with his girlfriend Sarah [King]. Also present is future sheriff Axel [Smith] and his girlfriend Irene [Betsy Rue]. Warden kills some of the kids. Tom gets left behind when Axel and the others make a run for it. The law arrives in time to save Tom, but he is shaken by the experience. The mine collapses on Warden, who is presumed dead.

Ten years later, with his estranged father dead, Tom returns. He’s selling the mine, which makes him the most hated man in town. Axel and Sarah are married with a son, but Axel is having an affair with a young woman who works for Sarah at the town grocery store. No one - with the possible exception of Sarah - is happy to see Tom back. Least of all Axel. And then the killing starts again.

Like Valentine, this movie is readily available. Which is why I’ve kept the spoilers to a minimum.

The sequence in the hospital is laughably gory. Body parts strewn all over the place and a heart in a candy box. It’s overkill and, with the exception of a equally comical 3-D effect involving a jaw, it sets the gore bar too high for the rest of the movie.

There’s only three real suspects in the new killings. There’s Tom. There’s Axel. There’s Warden. Ackles and Smith’s performances are good, but King stands out with her portrayal of a wife and mother  who has made a life with Axel, is still feeling something for Tom, and who doesn’t know if one of them is a killer.

The film keeps viewers guessing, right to a surprisingly satisfying ending. It drags in places, but it stumbles forward and reveals all sorts of secrets in this mining town.

The gore is kind of a crutch the movie uses when it’s running low on acting chops or plot revelations. A lot of the plot progressions are by the numbers. Despite having a higher budget than Valentine, My Bloody Valentine isn’t as good or as tight a film.

That said...I enjoyed My Bloody Valentine. It’s not a great movie. It’s not a movie I need to watch again. But it was 101 minutes of entertaining cinematic fluff. If you haven’t seen it, it’s worth watching.

“Holiday Horror” will be another recurring feature in this bloggy thing of mine with each installment tailored to the season. I will have another installment for Presidents Day. And, of course, I’ll be continuing my year-long War on Christmas by reviewing Christmas-themed horror movies as often as possible.

That’s all for today. I hope you have a much more fun and romantic Valentine’s Day than the characters in these films.

Posted by Tony Isabella at 7:12 AM