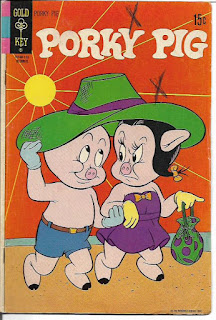 Porky Pig was first published in comic-book form by Dell, but went to Western (Gold Key) when the two companies split in 1962. There were 27 Porky Pig comics published in Dell’s Four Color series. But Dell only counted them as 24 issues when Porky got his own title, which ran for 57 issues from #25-81. Weird numbering followed Porky wherever he went.

Gold Key published 108 issues of Porky Pig from #1-109. But, wait Tony, you ask, shouldn’t that be 109 issues? No, my wondering pals, because, somehow, Gold Key never published Porky Pig #99. The material prepared for that issue ran in issue #103.

Almost all the comics content in this issue is reprinted from Dell issues. The cover, penciled by Tony Strobl, originally ran as the cover of Dell’s Porky Pig #71 (July-August 1960). The inker of the cover has not yet been identified.

With the unlikelihood of the stories in this issue being reprinted any time soon, I’m going to forego the usual SPOILER WARNINGS and just tell you about them.

“Powerhouse Petunia” (10 pages) is from Dell’s Porky Pig #58 [May- June 1958]. It’s written by Don R. Christensen and drawn by Phil de Lara. Porky and Petunia run out of gas while driving through what seems to be a Western desert. No, it’s not Porky wanting to make bacon. His gas gauge is broken. Seeing a train in the distance, he takes off to flag it down.

On the train are two bank robbers. Knowing the lawmen have boarded  the train to search it, they throw the bag with their stolen cash off the train. It hits Porky in the face.

Porky and Petunia figure out this is stolen money which the crooks will be coming back for. They have to get to town and the police.

Porky gets around the “no gas” problem by lassoing a grazing steer. He ties the rope to the car. The steer pulls the car, albeit not on the road. It’s following the rest of the herd.

The crooks have left the train. Now on horseback, they are searching for Porky. They follow the steer-drawn tracks to the now-abandoned car.

Porky and Petunia have found a cabin, While Petunia hides the cash, Porky disguises himself as old recluse, but the crooks see through the ploy. They don’t realize Porky isn’t alone.

The robbers light a fire in the cabin fireplace, threatening to use hot coals on Porky if he doesn’t give them the loot. Petunia goes up to the roof and, using her butt, tries to create smoke signals. She hopes to attract attention to their plight.

What Petunia does is fill the cabin with smoke. The crooks rush out and see her on the roof. They try to lasso her, but, instead, catch the chimney and pull it down on them. One crook is clobbered, but one still stands.

Petunia falls down the chimney and into the fire. Her dress catches on fire. She runs out the door and into the stomach of the second bank robber, knocking him down and out.

Porky and Petunia tie the crooks up. They know the horses will be able to pull their car and their captives to town.

A bunch of unfortunately stereotypical Native Americans are running to the cabin. They got Petunia’s message. Porky asks what it said. The new arrivals pull out bowls and yell:

I thought this was a good story. Porky and Petunia show bravery and cleverness throughout. The bad guys aren’t pushovers, so it’s not a one-sided clash. Sans the stereotypes, the punch line is funny. Thumbs up on this tale.

Cool Cat stars in “The Pollution Plot” (6 pages). Penciled by Pete Alvarado, maybe inked by Tony DiPaola and lettered by Bill Spicer, this is the only new story in the issue.

Cool Cat appeared in six Warner Bros. theatrical cartoons. He was kind of a knock off of the Pink Panther and Snagglepuss. This tale is set in the jungle where a character referred to as “the Hunter” finds man-made pollution is interfering in his hunting. However, as he pursues jungle creatures, he ends up polluting their homes and habitats. The animals send him fleeing up a tree, but allow him to come down safely so that we can be put to work undoing the damage he did to their environments. It’s a lightweight “social justice” story, but still unusual for the Gold Key comic books of the era.

Mary Jane and Sniffles star in “Happy Landing,” a single-page text story. The author is unknown, but the title illustration is by Tony Strobl (pencils) and John Liggera (inks). It’s also from the Dell Porky Pig #58.

Petunia plans to go to a costume party as Little Bo Peep, but her lamb would rather follow Porky. When Porky yells at the lamb, the little guy runs away. They follow him to Elmer’s farm. Fearing for his “whubarb” crop, Elmer chased the lamb away. It ran off into the woods where, according to Bugs Bunny, a wolf has been hanging out  of late.

Fearing for the lamb’s safety, Porky, Petunia, Elmer and Elmer’s “twusty shotgun” follow the missing lamb. Bugs is in the woods in a wolf costume. He made up the story about the wolf figuring that his costume would then “wow” everyone at the party.

Elmer spots the “wolf” and starts shooting. Bugs hides behind some brushes and tells Porky that it’s him. While Elmer is catching up to them, a real wolf appears and chases Bugs up a tree.

Porky and Elmer think the real wolf is Bugs in a terrific costume. Until Bugs shouts a warning from the tree. They climb up the same tree. The three of them fall on the wolf, but with insufficient force to stop the bloodthirsty creature.

They run for a cabin. They lock the door, but the wolf is outside huffing and puffing. The three friends decide to trick the wolf into climbing down the chimney and into a roaring fire. Apparently, pigs have a thing for chimneys. This time, it’s Porky who climbs up the chimney to lure the wolf. The wolf ain’t buying it.

However...Porky goes super-salesman and convinces the wolf that it needs the costume worn by Bugs:

Think of it! This beautiful new wolf suit can be yours! You can be the only wolf with a complete change for special occasions! All you have to do is let us go!

The wolf goes for this “deal” and quickly finds himself tied into the much bigger than him costume. Petunia arrives on the scene with her lamb and asks what the boys are going to do with the wolf they caught. Porky has a notion:

Tearing up an old red blanket, Porky, Elmer and Bugs wear the cloth like hoods. They’ll go to the costume party as a trio of Little Red Riding Hoods...complete with a wolf. They figure this is just for laughs, but that night, the grand prize goes to the wearer of “that  unusual two-headed wolf costume.”

Petunia is not pleased.

Porky isn’t much in control of the events of this story, but it’s still an amusing tale. I’m not sure if anything in this comic book would appeal to today’s younger readers, but I enjoyed reading it. It was a nice change of pace from the contemporary drama and humor of today’s typical comic book.

That’s all for today, my friends. I’m taking a couple days off for the Great Lakes Comic-Con in Warren, Michigan, but I should be back on Tuesday with more stuff.

Have a great weekend!

Posted by Tony Isabella at 7:48 AM