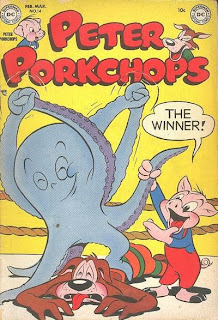 ﻿Maybe it was a family name going back for centuries.  Even so, they
should have thought about the kids and changed the name. Instead,
they named their son Peter Porkchops, a cruel reminder of the grim
fate that would await him someday.  But I digress.

Peter Porkchops #14 [February-March 1952] hit the newsstands in my
birth month of December 1951.  The Otto Feuer cover scene reflects
the issue’s lead story.  Besides Peter, the other characters shown
are Wolfie and a wrestler known as the Strangler.

Feuer created Peter Porkchops, who first appeared in Leading Comics
#23 (February/March 1947).  He drew the two Peter Porkchops comics
stories in this issue and illustrated the two-page text story that
starred his creation. Courtesy of the Grand Comics Database, here
are brief synopsis for those two comics stories:

Peter is manager for Elegant Edgar, a wrestling bear, so Wolfie
gets a wrestler of his own to manage--an octopus.

Wolfie convinces Peter to guarantee "double your money back if not
satisfied" for his detective agency, then tries to collect on the
guarantee by asking Peter to do impossible things.

This issue also contains stories of Biggety Bear and Goofy Goose
drawn by Rube Grossman, several activity pages drawn and probably
written by Martin Naydel, and a public service announcement wherein
Buzzy, who starred in his own teen humor comic, extorts readers to
“Be Yourself -- Your Best Self!” The PSA was written by Jack Schiff
and drawn by Win Mortimer.

DC published 62 issues of Peter Porkchops from November-December
1949 to October-December 1960.  In 1982, Peter was reintroduced as
Pig-Iron, a steel worker miraculously transformed into a powerful
being of living metal.  He became a member of Captain Carrot’s Zoo
Crew, a charming super-hero parody that has since been transformed
into crap by DC editors and writers who lacked both charm and any
appreciation of the source material they brutalized.  But I digress
once again.

Keep reading this bloggy thing of mine for more vintage comic-book
covers from the month of my birth.

Beset by discomfort from some dental work and the flu, I wasn’t as
productive last week as I would’ve liked.  I spent several hours in
front of the TV, watching various programs and DVDs.  I’m going to
write about my viewing, going from the worst to the best of what I
watched.  The worst were two movies from The Asylum so awful that
they made me determined to get over being sick and get back to work
just so I could write about them.

I watched Shark Week and Super Cyclone back-to-back.  They made me
question if I really need to see every movie of these particular
genres...or any of them.

Shark Week has a decent premise.  Major drug dealer seeks revenge
on those he blames for the death of his son.  He combines this with
his fetishistic fascination with sharks.  Perfect predator. Never
sleeps. Blah, blah, blah, you’ve heard it all before, though rarely
as badly performed as by Patrick Bergin.  He stinks up the screen
worse than the ever-present cigars his character smokes when he’s
not drinking the blood of sharks.

There isn’t a decent performance in this movie, but none are quite
as awful as Bergin or second-billed Yancy Butler.  I have enjoyed
Butler in a few things, but she stumbles around this movie and her
dialogue like she’s stoned.  Okay, it’s terrible dialogue, but she
could have made some effort.

Past the premise, the movie is boring.  The eight people kidnapped
by Bergin must face challenges involving different sharks, working
their way up to the great white.  You pretty much know someone will
die in each challenge and pretty much the order in which they will
die.  I suspect some actors accepted less money if their characters
were killed off sooner rather than later.  Even the sole survivor,
who you know will dispatch Butler and Bergin, is easy to spot...if
only because the penultimate survivor keeps telling the survivor he
won’t let her be killed.

One review of this movie praised the realistic sharks.  I suspect
most of the footage was of real sharks chowing down on human-shaped
sacks of meat.  Dark lighting kept viewers from seeing the carnage
clearly.  CGI sharks might not have been as realistic, but I think
they would have been more fun to watch.

Then there’s Super Cyclone starring Ming-Na and Nick Turturro, who
are so much better in everything else they’ve ever done.  Deep-sea
oil rig strikes volcano.  Heated ocean creates conditions for the
first cyclone ever to hit California.  Ming-Na says it’s what hot-
shot scientists like her call a super cyclone.  Almost all of her
character’s dialogue and that of Turturro’s character and that of
Ming-Na’s three’s-a-crowd associate is pseudo-scientific nonsense
that is so repetitive and tedious that the viewer starts praying to
be swept away by the super cyclone.

The special effects are pretty much the same ones you see in all of
Asylum’s other weather-related movies.  The characters are poorly
developed. The movie seems much longer than its listed running time
of 90 minutes.  Another stinker.

Created by Kevin Williamson and starring Kevin Bacon, The Following
made its debut last Monday on Fox.  Bacon plays Ryan Hardy, retired
FBI agent who caught Poe-inspired serial killer Joe Carroll (James
Purefoy) and almost died in the process.  Hardy is on disability,
his pacemaker-sustained health hampered by his drinking.  Carroll
is on death row, but escapes to kill his only surviving victim and
many other people along the way.  From prison, Carroll has trained
an army of followers, all willing to kill in his name.

The Following is brilliantly acted and written, but I won’t watch
it until I know whether the good guys win in the end.  Blame it on
the DC and Marvel comic books of today.  I am so bone-weary seeing
the villains in those comics commit unspeakable crimes and get away
to commit more unspeakable crimes that the thought of watching some
13 hours of this show with no satisfying resolution terrifies me as
much as anything in the pilot episode.

I thoroughly enjoyed the opening episode of Ripper Street, which is
airing on BBC America on Saturdays.  The show is set in Whitechapel
six months after the last known Ripper slaying, Every violent act
is feared as the Ripper’s work.  The district itself is a wretched
mix of factories, brothels, pubs, and shops, filled with desperate
people trying to survive and with everything so close to everything
else that you can almost feel the walls closing in on you.

When a female violinist is apparently murdered in Ripper fashion,
Detective Inspector Edmund Reid is determined to resist declaring
the Ripper is back.  His efforts are compromised by a newsman eager
for the paper-selling sensation and Inspector Frederick Abberline,
haunted by his failure to catch the Ripper.

Matthew Macfadyen is terrific as Reid, but there’s not a bad actor
in this cast.  The writing is equally good and captures the sense
that a new century’s coming.  Indeed, the motive and methods of the
first episode’s killer foreshadow things to come in that century.
Though murder is a grim subject, Ripper Street has gotten off to a
delightful start.  I look forward to watching the remaining seven
episodes of this first season.