THE CORPSE ON THE SIDEWALK 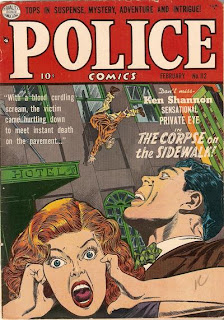 ﻿For years, Police Comics was the home of Plastic Man, the Spirit,
Firebrand, the Human Bomb and my beloved Candy.  That all changed
about a year before issue #112 [February 1952] hit the newsstands.
The costumed heroes were gone, Candy was gone and the title was now
the stomping grounds of somewhat more realistic characters like Ken
Shannon, a rough, tough and rugged private eye.  That’s Ken and gal
assistant Dee-Dee Dawson on the Reed Crandall cover.

Shannon had a two-year run in Police Comics and in the ten issues
of his own title.  According to the Thrilling Detective site, the
“Mad Irishman” fought white slavers, Oriental criminal masterminds,
shrunken heads and, on one memorable occasion, zombies.  The nine-
page “Corpse On the Sidewalk” was penciled by Crandall with inks by
Chuck Cuidera.  The writer is uncredited, but we know Joe Millard
was writing for the feature around this time.

The rest of the issue’s contents:

Inspector Denver in “Dead Man's Return” (6 pages). The Grand Comics
Database opines the story was drawn by W. G. Hargis.  The GCD has
no writer credit for this or any other story in the issue.

T-Man Pete Trask in “The Doctor of Destruction!” (7 pages).  There
are no credits for this story or the issue’s remaining stories.

“Crime In the Carnival,” a single-page text story.

“A Friend In Need,” a six-page comics story.

As always, I would love more information about this issue and will
share whatever comes my way.  Keep watching this bloggy thing for
more vintage comic-book covers from my December 1951 birth month.

Schwartz was the premiere Jughead artist for three decades.  Which
means he draw a whole bunch of stories starring my favorite Archie
character. I always liked Schwartz’s art, but seeing it in this
gorgeous oversized (around 11" by 9") hardcover book increased my
appreciation of his many talents.  Working with scripts by terrific
writers like Frank Doyle and George Gladir, Schwartz was a master
of body language, expression and movement.  His storytelling never
falters; each panel flows smoothly into the next, each page flows
smoothly into the next.  When he breaks the panel borders, he adds
an almost three-dimensional sense to the art.  Even when he breaks
the panel borders incorrectly, that is to say when he leads your
eye away from the next sequential panel.

Each of these volumes collects over a hundred big pages of comics
drawn by Schwartz.  In the first volume, a short remembrance from
his daughter gives us an image of her father the artist.  But, when
it comes to the art itself, Schwartz’s talents tell us everything
we need to know about his genius.  These books are must-haves for
serious students of the comics art form and, of course, for Archie
fans of all ages.

Batman: Earth One by Geoff Johns and Gary Frank [$22.99] was that
rarest of creations, a DC Comics super-hero book I enjoyed.  This
“new generation” Batman emphasizes the man more than the scary bat
who is usually such a tedious cliche in the “actual” DC Universe.
He’s not completely prepared for the mantle he has assumed, not in
body, mind, or Bat-equipment.  He makes mistakes.  He needs help.
But, somehow, this troubled Bruce Wayne still manages to put clues
together, still manages to save innocents, still manages to inspire
people.  Johns is at the top of his game in this graphic novel, so
much so that I wish the “New 52" had utilized this Batman instead
of recycling the complicated and overpopulated pre-New 52 Batman
with its painfully obvious course corrections along the way.  Add
Johns’ mostly excellent writing to the always excellent Gary Frank
art and this might be the best Batman comic book or graphic novel
in several years.  Recommended.

Reading older comics, I suffered through 2009's Batman: Battle for
the Cowl.  The core series and its spin-off were amazingly awful.
With two exceptions.

Batman: Battle for the Cowl: Commissioner Gordon #1 by Royal McGraw
and Tom Mandrake was one of the best Gordon stories ever.  The guy
takes on Mr. Freeze without Batman or any of his surrogates.  It’s
a gutsy thriller and a satisfying done-in-one comic book.  It led
me to an unsatisfying Grand Comics Database search which revealed
McGraw, who also writes for movies and TV, only wrote a few Batman
stories.  I’m looking forward to reading them.

Batman: Battle for the Cowl: The Network #1 by Fabian Nicieza, Don
Kramer and John Calafiore wasn’t as good as the Commissioner Gordon
one-shot, but I really liked the concept of Oracle pulling together
a small army of Batman allies to deal with the problems caused by
the Dark Knight’s disappearance.  Alas, Oracle is back to fighting
crime as Batgirl - not an unpleasant development, but, again, not
as good as her Oracle days - and other members of this Bat Brigade
have been changed or abandoned in DC’s New 52 Universe.  Still, I
wouldn’t mind seeing something like this concept be introduced in
either the DC or Marvel Universe.

Take a lawless city without much of a super-hero presence, maybe in
the USA, maybe in another country.  Establish a computer whiz with
the means and smarts to command a small army.  Fill the team with
second-stringers who deserve a chance to shine.  As a writer, I’d
have fun with such a title.  As a reader, well, that depends on how
good the comic book was and how much of the writer’s own voice came
through in the stories.  As you’ve doubtless seen, I’m not a huge
fan of editor-driven or clique-driven comics.