HOW WAS THE PICTURE? 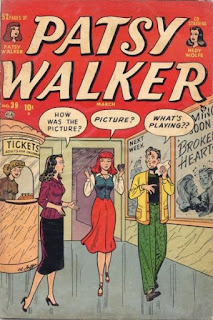 ﻿Patsy Walker was a headliner for three decades.  Along with Millie
the Model and Kid Colt, she was one of only three Timely characters
to be continuously published from her debut in the 1940s and well
into the 1960s.  Her own title ran 124 issues from 1945 to December
1965.  Patsy and Hedy, a spin-off title starring Patsy and her best
friend/rival lasted 110 issues from February 1952 to February 1967.

Created by Ruth Atkinson, Patsy was a typical comics teen appearing
in the typical romantic comedies shorts.  Patsy Walker #39, dated
March 1952, hit the newsstands in December 1951, which is the month
of my birth.  I have a keen interest in comics from that month and
that’s why you see them featured in this bloggy thing of mine with
obsessive regularity.

Al Jaffee, who would become better known for his contributions to
MAD, drew the cover and interiors to this issue.  Since he was also
a writer, he may have written most if not all of the material that
appeared in the issue.

The issue also had stories starring Hedy (4 pages) and Buzz (also
4 pages) and additional features, such as the “Patsy's Club Page”
letters page, the “Patsy's Fashion Cut-Ups” activity page and a 2-
page text story, “Smooth as Silk.”  As you might imagine, given my
fascination with old comics, I’d love to see some sort of “best of
Patsy Walker” collection.

In the Marvel Universe proper, Patsy and Hedy were part of the huge
crowd that gathered outside the Baxter Building to celebrate the
wedding of Fantastic Four members Reed Richards and Sue Storm.  She
should have gotten back on the train or bus or whatever method of
transportation she used and gone back to her home town.  Instead,
she married and was subsequently abused by Buzz, hung around with
Hank McCoy (the Beast), donned a super-hero costume to become the
Hellcat, hung out with Moondragon and eventually became a member of
the Defenders.  She started “dating” the Son of Satan, learned her
mom was a devil-worshiper, married the Son of Satan, took her own
life, escaped from Hell and...I give up.  Some classic comic-book
characters should just be left in peace.

Moving on to the reviews...

Think Perry Mason...with wings.  Hannah Singer, Celestial Advocate
by Peter G [CreateSpace Independent Publishing Platform; $15] is a
collection of stories about a human woman who defends and sometimes
opposes human beings seeking to get into Heaven or, at least, avoid
being cast down into Hell.  She herself was once on trial in this
afterlife court with the Church Advocates demanding she be sent to
Hell.  I’m not going to tell you why or how she avoided that fate.
This is a book with delicious surprises.

Here’s what I will tell you: God doesn’t want his creations to go
to Hell.  The Celestial Advocates, led by St. Michael, most often
argue on the behalf of humans, sometimes winning them their eternal
reward and sometimes a lighter sentence than being cast down.  The
rigid Church Advocates represent an often unforgiving Church whose
individual members often carry with them the prejudice and small-
mindedness of their human lives.

Peter G does a brilliant job playing with these concepts through a
host of intriguing and well-conceived characters.  His stories are
page-turners, even when you know Hannah will triumph at their end.
Because you don’t know how she’s going to win.  Whether you are of
a religious bent or not, you’ll enjoy this collection.

Peter G has also written and published a second volume of stories:
On A Wing And A Prayer: From The Case Files Of Hannah Singer,
Celestial Advocate [$15}.  Both of these collections are available
from Amazon.

On A Wing And A Prayer: From The Case Files Of Hannah Singer,
Celestial Advocate:

“Superman in the Bronze Age” is the theme of editor Michael Eury’s
Back Issue #62 [TwoMorrows; $8.95].  In over a dozen articles and
sidebars, Eury and his writers cover the post-Weisinger, pre-Byrne
comic-book adventures of the Man of Steel.  If you’re a Bronze Age
fan, you’ll find it irresistible.

Digression. I found the reading not as easy as I would have liked,
but that’s more on me than on the magazine.  It was only this month
that the soulless corporation that is DC Comics won another legal
victory over the heirs of Superman co-creator Jerry Siegel.  Yeah,
a case can be made that these were correct legal rulings, but I see
them as allowing DC to continue its predatory and unfair treatment
of comics creators.  End of digression.

Putting my personal feelings aside, this issue contains a number of
terrific pieces.  Eury writes about editor Julius Schwartz’s years
of Superman comics.  Eddy Zeno has a heartwarming personal piece on
artist Curt Swan.  There are also entertaining informative articles
on back-up strips, the Superman family, the World of Krypton mini-
series, the Earth-2 Superman, Superman collections and Alan Moore’s
landmark “Whatever Happened to the Man of Tomorrow?”.

My quibbles are minor.  Though the principals are sadly no longer
with us, Back Issue is overdue for a look at the Superboy comics by
writer Frank Robbins and editor Murray Boltinoff.  Though different
from previous and future Superboy stories, they were spiffy yarns
that were a cut above most DC comics of the era.

The article on the Atomic Skull omitted his appearance in an issue
of Teen Titans Spotlight written by...oh, you figure it out.  When
those Isabella issues - U wrote two - emerge from my Vast
Accumulation of Stuff, I plan to write about them and the future
stories that never were.

How about listing the authors of the articles within the contents
page? Since the features in a magazine like Back Issue don’t need
to be read in any particular order, that would enable readers to go
immediately to pieces by their favorite writers.  One of mine would
be the encyclopedia John Wells.

Back Issue remains a must-read for me.  Because I was so busy with
my own comics work in the Bronze Age, I’m always learning cool new
stuff about that era.  I recommend it highly.