UNTOLD HORROR WAITS IN THE TOMB 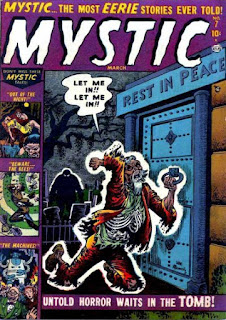 Mystic was one of several horror anthologies which Atlas (Marvel)
launched in the early 1950s.  It ran 61 issues from March 1951 to
August 1957.  It was cancelled in the “Atlas Implosion” that began
when the publisher’s distributor collapsed.

Hitting the newsstands in my birth month of December 1951, Mystic
#7 [March 1952] has a Joe Maneely cover.  On the left side of this
cover are small scenes from or reflecting interior stories.  This
was a common cover design for Atlas.

Here are this issue’s contents, thanks to the tireless work of the
good folks at Atlas Tales and the Grand Comics Database:

“The Tomb” (5 pages) was drawn and signed by Gene Colan.  The GCD
synopsis: “A wealthy miser pretends to be dead so that he can dash
the expectations of his nephew when he confronts him, but when he
finally does reveal himself they ignore him and he realizes that
the drug he took to simulate death was too much for his heart and
he is now a ghost.” This story was reprinted in Vault of Evil #11
[June 1974].

“Out of the Night” (5 pages) was drawn and signed by Jim Mooney.
The GCD synopsis: “A writer is attacked and killed by a giant bug.”
The story was reprinted in Journey into Mystery #8 [December 1973].

“The Man Who Made a Wish!” (3 pages) was drawn and signed by Vernon
Henkel. The synopsis: “A man makes a pact with Satan for money and
Satan gives him a disease that the medical community will pay him
10,000 dollars to partake in their study, but the disease will
ensure he’ll only have one month of life to spend the money.”  The
story was reprinted in Crypt of Shadows #8 [February 1974].

“Beware...the Bees!” (4 pages) is drawn by an unknown artist.  The
GCD synopsis: “A man takes a serum in order to work unmolested
around bee hives which produces results akin to the those of the
movie ‘The Fly.’" The story was reprinted in Chamber of Chills #12
[September 1974].

The art on “The Thinking Machines!” (6 pages) has been attributed
to Werner Roth. The GCD synopsis: “Machines everywhere begin to run
amok killing humans because in a few years the humans will destroy
themselves in an atomic war. The machines refuse to be devastated
along with them.” According to the GCD, this story has not yet been
reprinted.

Marvel’s horror reprints of the 1970s were fascinating to me.  When
I was working in the Marvel Bullpen, I proofread many of them.  But
I never thought to ask how the stories were selected.  I knew they
came from old photostats retrieved from storage, but, by the time
I would see them, they would already be assembled into the issue at
hand.  I’ll give a shout out to Roy Thomas and see if he can shed
some light on it.  If he does, I’ll share the information in some
future bloggy thing.

Keep watching this blog for more vintage comic-book covers from my
birth month.  I hope you enjoy them as much as I do.

My random catch-up reading continued with Superman Earth One Volume
Two by J. Michael Straczynski with art by Shane Davis [DC; $22.99].
While I thought Straczynski’s run on the monthly Superman title was
mediocre and was likewise not impressed by Superman Earth One
Volume One, this latest effort was much better.  Clark Kent emerges
as a more complex and interesting protagonist.  The supporting players
get some nice development as well.  More welcome was Superman’s
hero-without-borders approach to a foreign dictator and mass murderer.
As I’ve noted before, I like Superman best when he’s at odds with
authority figures.

Where this latest album in the series doesn’t thrill me is in its
sub-plot introductions to a new take on Lex Luthor - he bores me in
multiple realities - and the tired government stance of “we need to
be able to kill Superman if we have to.”

No one has done anything new or interesting with Luthor in years.
While typing that sentence, I thought of two actual new takes that
would work in this series...and one of them would even work in the
current “official” Superman continuity.

As for the government/military wanting to kill Superman, I suspect
what we’d actually see is politicians doing whatever they could to
get photo ops with the Man of Steel and get his support for their
positions.  A savvy super-hero would even find a way to use that to
steer the politicians to actions that would benefit the citizens.
He’d be the biggest political ticket in the history of the United
States.  Even Fox News would move to the center to get him on their
shows.  But I digress.

Superman Earth One Volume Two works even if you didn’t read Volume
One.  It’s worth checking out.

Joe Kubert Presents #1 and #2 [DC; $4.99] were everything I could
have hoped for, thick comic books filled with great work by Kubert,
Sam Glanzman and Brian Buniak.  Outside of recommending the series,
which I do, I have these two thoughts:

Kubert’s Hawkman story is the best Hawkman stories in, literally,
decades.  It’s a fresh take on the character that avoids all of the
“DC Dark” crap that stains almost all of the publisher’s super-hero
books.  I haven’t enjoyed Hawkman this much since I was writing him
in the 1980s.

Why won’t DC collect Glanzman’s wonderful “U.S.S. Stevens” stories
into as many volumes as it takes to collect them all? Those mini-
tales are some of the best war comics of the past several decades.
Properly promoted, these volumes could sell to the comic book fans
of my generation and then some and also to readers of war history,
a not insignificant demographic.

That’s all for today, my friends.  I’ll be back on the morrow with
more stuff.