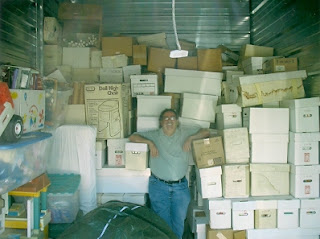 ﻿If you’re new to my bloggy thing and these sales...

In the pages of the fondly remembered Comics Buyer’s Guide and in
a variety of online venues, I have been reviewing comic books and
related items for decades. Up until a few years ago, I received at
least 100 and often close to 300 review items monthly from comics
creators, editors and publishers hoping for reviews in my columns.
In addition, I had been buying comic books, books and magazines
since I received my first dime from a generous relative.  Or maybe
it was a dinosaur tooth which could be traded for cave drawings in
those prehistoric times.  My love for comics has been a vital part
of me almost since I was born.

Having amassed this Vast Accumulation of Stuff, which soon outgrew
even my Tardis-like house and filled what we now call the Fortress
of Storage, I realized I might be leaving a burden on my wife and
kids should I ascend to my doubtless heavenly reward.  I launched
biweekly garage sales and sold literally thousands of comic books
and other items at each sale.

This was fine for those who could travel to my Medina Ohio garage.
Some drove from as far away as Columbus.  It was less fine for my
Facebook friends and bloggy thing readers who lived further away.
So I started doing these online sales.

Monday usually means new items for my ongoing Vast Accumulation of
Stuff sales and reduced prices on some previously unsold items.
That’s the case this week.  Unsold items are eventually taken off
this list and will be part of my garage sales when they resume in
the spring.  Weather permitting.

Items will be shipped via United States Postal Service.  There is
a $5 shipping/handling charge for up to four items via media mail.
Add $1 for every two additional items.  The charge helps defray my
expenses.

This week’s sale ends when the new sale goes up on Monday, February
4. While supplies last, all orders will receive a free signed copy
of an Isabella-written Hawkman comic book.

HARRY, THE RAT WITH WOMEN by Jules Feiffer [Fantagraphics, 2007]. Softcover. $6

MARVEL COMICS IN THE 1970s: AN ISSUE BY ISSUE FIELD GUIDE TO A POP CULTURE PHENOMENON by Pierre Comtois [TwoMorrows; 2011]. Softcover. $13

MINIFIGURE CUSTOMIZATION: POPULATE YOUR WORLD by Jared K. Burks [TwoMorrows; 2011]. Shows wide range of techniques you can use to alter Lego Minifigure into any character.  Softcover. $5

RASL: THE DRIFT by Jeff Smith [Cartoon Books; 2008]. First volume of the sci-fi noir series by the creator of Bone.  Oversized 9"x12" softcover. $6

THIS IS A SOUVENIR: THE SONGS OF SPEARMINT & SHIRLEY LEE [Image; 2009]. “An anthology showcasing re-interpretations of the songs of British indie group Spearmint and singer/songwriter Shirley Lee by some of the most unique voices in comics today.”  Includes Kieron Gillian, Jamie McKelvie, Salgood Sam and others.  Oversized (just under 12"x12" softcover. $14

BACK ISSUE #8 [TwoMorrows; February 2005]. Black Super-Hero issue. Featuring a guest editorial by me. Signed on request. $6

LALO Y LOLA/HI AND LOIS [King; 1974]. This is a flip comic book. On one side are Hi and Lois comics in English and, on the other side, the same comics in Spanish. $1