MIXING IT UP IN COLUMBUS 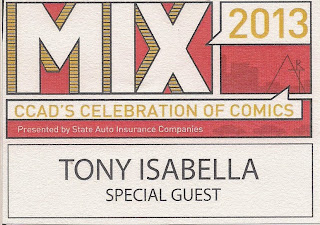 ﻿I started writing today’s bloggy thing nearly a month ago and then
my October got crazy busy and chaotic, resulting in an hiatus from
my usual daily blogging.  Clinging desperately to the hope my dear
readers will buy my argument that “later” is better than “never,”
here’s the first half of my two-day report on the Mix 2013 comics
symposium, which was held on Friday and Saturday, September 27-28,
at the Columbus College of Art and Design.  However, if you desire
a more detailed and less “me, me, me” account of this spiffy event,
I direct you to The Comic Reporter where Tom Spurgeon crosses the
T’s and dots the I’s.  You’ll see why Spurgeon won an Eisner Award
for “Best Comics-Related Periodical/Journalism” and I got a rock.

I haven’t been a fan of comics-related academia.  On occasion, I’ve
read ponderous books and thesis papers on comics and have usually
come away thinking the authors have sucked the joy out of the thing
I love in an effort to make it palatable to those who do not “get”
comics as wonderful entertainment first...and an art form second.
Such books and papers usually bore me.

Yet Robert Loss, whose email signature notes that he is “Visiting
Full-Time Faculty, English Dept” at CCAD and “Mix '13 Programming
Coordinator,” was kind enough to invite to the symposium.  Knowing
the trip would give me a chance to visit with my daughter Kelly, a
student of The Ohio State University, and my son Ed, who would be
in Columbus for the OSU/Wisconsin football game, I said I would be
happy to attend the event and participate in a panel discussion on
Doc Jonathan Gayles’ documentary White Scripts and Black Supermen:
Black Masculinities in Comic Books.  Those of you who have seen the
film know I play the role of “White Scripts” in it.

If you haven’t seen White Scripts and Black Supermen, the film is
an amazing piece of history and reflection.  In the near future, I
need to devote an entire bloggy thing to this documentary.  I’m so
glad Dr. Gayles asked me to be part of it.  It has most definitely
given me new perspectives on my own work.

Mix 2013 started on Friday.  My Friday morning turned out to be a
more complicated than I’d have liked.  I got up at 2:30 am to drive
my wife Barb to the airport so she could visit a friend in Denver.
I woke to a painful reoccurrence of my gout which I needed to hide
from Barb.  There was some confusion with the neighbor who watched
my cat for me...and that was entirely on me.  I left Medina hours
later than I originally planned.  My lunch plans with Kelly became
dinner plans.  Life’s little adventures.

I drove directly to CCAD’s Canzani Center Auditorium for my badge,
information package and the key to the “Visiting Artist” quarters
at the nearby Abigail Apartments.  I knew I didn’t have time to do
any Mix-related activities before my dinner and visit with Kelly,
so I headed over to the Abigail.

I gotta gush about the Abigail.  The one-room apartment was huge.
It had a comfortable bed, a sofa with coffee table, a large chair,
a flat-screen TV, a table with four chairs, a large refrigerator,
plenty of kitchen cabinets, a stove, a dishwasher, a microwave, a
large wardrobe, lots of closet space, a washer, a dryer, and a big
bathroom.  Despite the apartment being on the first floor and right
next to the sidewalk, no street sounds ever disturbed me.  It would
be perfect for a longer stay, just a few minutes away from all the
college stuff and from a terrific gourmet grocery store.  It made
me wish I was staying longer.

Once I was settled, I drove to Kelly’s house to take her out for an
early dinner and some grocery shopping.  Then, shortly after I got
back to the Abigail, my son Eddie stopped by to visit with me for
a short while.  Just a short while, of course, because, you know,
Ohio State football demands dedication.  He had to meet up with his
old college buddies for the serious meditation and reflection that
precedes these sporting events...or at least that’s what I choose
to believe at such times.

After Eddie left, I looked over the Mix 2013 event program, read a
couple comics, and watched the first two episodes of The Michael J.
Fox Show.  The show was a pleasant diversion and I enjoyed seeing
Fox wring self-deprecating laughs from his Parkinson's disease.  It
was funny but it was also dignified in its own raucous way.  If I
catch up on all the shows I already record/watch, I’d probably be
a regular viewer.

One good night’s sleep later and I was ready to head to the Canzani
Center for the second day of Mix 2013.  My first stop was to stop
by the Mix Store to chat with Ken Eppstein, who was selling my 1000
Comic Books You Must Read and books and comics by other comics
creators attending the symposium.

Unlike comics conventions, Mix 2013 didn’t have a dealer’s room or
an artists alley.  It didn’t really have any place where attendees
could just hang out the way I would at a comics convention.  It was
all panels and papers and workshops.  I confess I felt more than a
little out of place, but, at age 61, I like to challenge myself in
a variety of ways.  I would wrap my head around academia and make
it my friend.

Seeing a couple of old friends on the “Creative Methods” panel that
was scheduled for 10-11:30 am, I figured I’d go to that panel and
even take honest-to-gosh notes like I almost never did when I was
actually in school.  Maybe this old dog of a writer could learn a
few new tricks.

The panelists were Matt Feazell (The Amazing Cynicalman), Max Ink
(Blink), Terry Eisele (With Only Five Plums), Alex Heberling (The
Hues), Talcott Starr (Iguanodon Cheese) and Valerie Starr (Octopus
Story).  The moderator was Canada Keck, who has written and self-
published comic books and appeared in several anthologies, edited
other anthologies and curated exhibits of comic art. I’ve read and
enjoyed Feazell and Ink’s comics for decades, but I was unfamiliar
with the others.

My earlier trepidations aside, I found myself in familiar ground in
attending this panel.  Each participant introduced themselves and
talked about their work.  I didn’t learn any new tricks, but I was
surprised that newspaper strips were the initial inspirations for
these artists and writers.  I wasn’t a big newspaper reader when I
was growing up because my hard-working father only brought home a
paper on Saturday, the one day of the week he had the time to read
it.  My own formative inspirations were the comic books from which
I learned to read by the time I was four years old.

Bill Watterson’s Calvin and Hobbes was the most cited inspiration.
Other inspirations were as varied as the super-hero comics of Stan
Lee and Jack Kirby to the autobiographical stories of Harvey Pekar
to Sailor Moon, Star Wars, Kabuki, Fun Home and webcomics.  While
my first comic books were Superman and Casper the Friendly Ghost,
my ongoing inspirations have included every kind of comic book and
graphic novel you can imagine.

A few questions occurred to me while listening to these panelists.
They were mostly self-publishing, so what was their aim in creating
comics?  What were they trying to accomplish with their comics or
was it just their natural way of expressing themselves?  What was
their end game?  I came to creating comics because I wanted to be
an entertainer, a storyteller.  Other than creating comics as long
as I am physically able to write and, secondarily, earn a living
from my writing, I’ve no particular end game.  Indeed, I never even
considered what my end game might be until recently and, even now,
it’s only a vague notion that I want to return to writing comics of
all kinds and find a way to present those comics to as many readers
as possible. Career planning may not be my strong suit.

After the panel, I hit the Mix store to pick up comics by all the
participants.  I’ll be reading and writing about those comics over
the next few weeks.  After bringing my purchases to my van, I had
lunch with Ken Eppstein.  Then it was time for the Mix 2013 showing
of White Scripts and Black Supermen and the panel discussion which
would follow it.

I’ll be writing about the documentary and the panel discussion in
my next exciting bloggy thing, as well as meeting a comics creator
whose work I admire, reflecting on my past writings and having an
unexpected brush with the law as I left Columbus. Did I fight the
law and did the law win? Find out tomorrow.

Posted by Tony Isabella at 4:45 AM