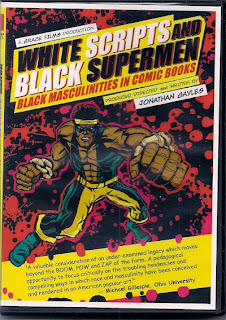 ﻿Continuing my report on the Mix 2013 comics symposium, which was
held Friday and Saturday, September 27-28, at the Columbus College
of Art and Design...

There was a screening of White Scripts and Black Supermen: Black
Masculinities in Comic Books on Saturday at 1-2 pm.  You may have
seen clips of this Jonathan Gayles documentary online, but viewing
the entire 52-minute film is an experience, especially if you are
the guy representing those white scripts.

I met Gayles, an associate professor of African-American Studies at
Georgia State University in Atlanta, at an East Coast Black Age of
Comics Convention.  He wanted to interview me for the documentary.
We did a second interview at my home in Medina some months later.
That’s the footage that appears in the film.

The documentary covers Black super-heroes introduced in the 1960s
and 1970s.  From the back cover of the DVD box:

In a serious, lively and humorous manner, the film examines the
degree to which some of the first Black superheroes generally
adhered to and were burdened by stereotypes about Black men.
However we also witness how some images shifted - often clumsily -
to reflect the changing times.

The post-screening panel was moderated by writer Victor Dandridge
and featured Gayles and myself.  It was a serious and thoughtful
discussion, but not so serious that there wasn’t room for laughter
as we discussed the film and some of the comics industry missteps
in its portrayal of Black heroes.

After the panel, I did a signing at the Mix Store and continued to
answer questions from several panel attendees.  We covered a lot of
territory on the panel.  I could write several bloggy thing trying
to summarize the film and the panel.  Instead, at least for today,
you’ll just get an incredibly short version of my involvement with
characters of color in comics.

I grew up in all-white neighborhoods on the west side of Cleveland,
Ohio.  My first Black friends were friends I met through our mutual
love of comics and, even then, I recognized how unfair it was that
there were almost no Black super-heroes.  I decided then and there
that, if I ever got into the comics industry, I would do my best to
rectify that.  I was motivated by my sense of fairness.

I was not a deep thinker back then and some would say I still have
not mastered that today.  I was thrilled when Black heroes began to
appear at Marvel and DC, but it took a while before I realized how
many aspects of these characters were problematic.

Digression. “Problematic” became one of my favorite words after I
saw it used to such great effect in the Gayles documentary.  What
a kind way to designate such indisputably offensive notions as all
the Black people on Krypton living on their own separate island.
It was science fiction for KKK members.

Second digression. “No pants” became one of my favorite phrases as
the documentary and panel discussion pointed out how many heroes of
color wore shorts.

Much as I liked Luke Cage when he made his debut, I never got the
tiara or the chain around his waist.  The tiara looked silly from
the get-go.  The chain? Why would a “Hero for Hire’ want to carry
around that extra weight?  I knew it was supposed to be symbolic,
but sometimes symbolism has to give way to common sense.

Third digression.  Former Marvel editor-in-chief Len Wein used to
claim Luke Cage did not have super-strength.  I ignored that when
I was writing the character, but I wish I had thought to point out
the chain thing all those years ago.  That would have settled the
dispute for any rational person.

In my excitement over Cage’s debut, it didn’t occur to me that the
first African-American hero to headline his own Marvel Comics title
was some mercenary who had to be paid to be a hero.  On the other
hand, I don’t think Cage ever actually collected a paycheck while
I was writing him.

Had I stayed on the renamed Luke Cage, Power Man, I was planning to
clear him of the crimes for which he had been framed and for him to
become a part-time college student.  I wanted him to be more than
who he was at the time.

When I decided scientist Bill Foster would become a super-hero and
use the size-changing powers developed by his colleague and friend
Henry Pym, I wanted him to be called Giant-Man.  That was vetoed on
account of Giant-Man had apparently sold badly in Tales to Astonish
back in the day.  Just calling him Goliath didn’t seem quite strong
enough, so, taking a cue from the movies I was watching at theaters
with artists like Arvell Jones and Ron Wilson, and to my later
regret, I went with Black Goliath.

To my credit, when a white artist submitted costume designs for the
new Goliath, I was appalled that one of his designs featured Foster
wearing a leopard skin.  The “humor” was lost on me.

I was enraged when Steve Englehart revealed that the Falcon was an
actual criminal, brainwashed by the Red Skull into behaving like a
good guy.  During my brief stint on Captain America, I wrapped up
that storyline to the best of my ability.  The Falcon went on trial
and was given probation with Nick Fury as his parole officer.  Had
my stint on Cap been longer, I would have never again mentioned any
of that.  Sometimes the best you can do with idiotic continuity is
to ignore it and pretend it never happened.

Two of my creations made a recent list of fan picks for the top 30
Black super-heroes.  At Mix, I was asked many questions about those
characters.  Come back for tomorrow’s bloggy thing for some history
about and reflection on Black Lightning and Misty Knight.