THE SHADOW #75: THE GOLDEN MASTER 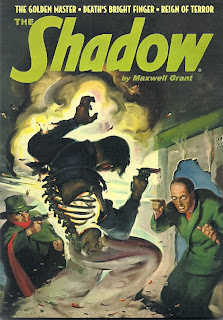 Recently published by my pal Anthony Tollin’s Sanctum Books is The
Shadow #75: “The Golden Master” “Death’s Bright Danger” &
“Reign of Terror” [$14.95]. These three classic pulp stories were
written by Walter B. Gibson, Theodore Tinsley and Bruce Elliott (all
writing as Maxwell Grant).

“The Golden Master” first appeared in the September 15, 1939 issue
of The Shadow Magazine and introduces the classic Shadow nemesis,
Shiwan Kahn.  It’s written by Gibson.

Tinsley’s “Death’s Bright Danger” has never before been reprinted.
It appeared in the May 15, 1942 issue of the magazine and pits The
Shadow against...the Light.

Elliott’s “Reign of Terror” ran in the June-July, 1948 issue of the
magazine.  It, too, has never been reprinted.

Posted by Tony Isabella at 1:31 PM