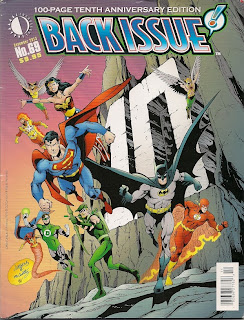 Back Issue #69 [TwoMorrows; $9.95] celebrates the magazine’s
tenth anniversary with a 100-page issue focusing on the centennial
and other century anniversaries of long-running comic-book titles.
The Dan Jurgens cover of the Justice League of America is a tip-off
that this issue, like most issues of Back Issue, tends to favor DC
Comics over other publishers.  Not surprising, since editor Michael
Eury got his comics career start working for the late and sorely-
missed Dick Giordano at DC.

The issue opens with a very nice summation of the comics industry’s
ambivalent attitude towards century issues during the 1940s through
the 1960s.  It’s written by Robert Greenberger, who worked for DC,
Marvel, Starlog and Weekly World News.  Jim Kingman rounds out the
discussion with a piece on the non-anniversary DC anniversaries of
the Bronze Age of Comics.

Mark Arnold contributes the only non-DC/Marvel article.  He writes
about Casper the Friendly Ghost #200 and Richie Rich #200.  Both of
these issues were published by Harvey Comics.

I skipped Larry Tye’s “Off My Chest” column because I’ve had more
than enough of his pro-DC, anti-Siegel and Shuster garbage in other
venues.  Of course, what with DC having failed to honor just about
every agreement it ever made with me, I confess to being more than
a wee bit peeved at the company.

The lowest marks would go to Adventure Comics #400 - for all of the
terrific work he did elsewhere, editor/writer/artist Mike Sekowsky
never got the hang of Supergirl - The Flash #300 and World’s Finest
Comics #300.  Adventure Comics #400 was just plain awful while the
other two issues were merely mediocre.  World’s Finest Comics after
the departure of editors Julius Schwartz and Murray Boltinoff was
a mess while The Flash never truly recovered from the departure of
Schwartz as its editor.

The other DC anniversary issues are, at the least, fun comic books.
Bob Haney’s stories for Brave and Bold #100 and #150 might not have
jelled with the rest of the DC Universe, but, like his other B&Bs,
they were always interesting.  Paul Kupperberg’s Showcase #100 is
notable for his brave and largely successful attempt to include nearly
every previous Showcase headliner.

I suspect many - and many most - readers of these anniversary comic
books will have their own notions of which are the best and which
are the worst.  That’s just part of the ongoing fun of Back Issue.
Here’s hoping the next ten years are as enjoyable as its first ten
years have been.

Happy Marriage!? [Viz; $9.99 each] is a ten-volume series by Maki
Enjoji.  In the shojo manga series, 22-year-old office worker Chiwa
Takanashi agrees to an arranged marriage for the sake of her debt-
ridden father.  Her husband is Hokuto Mamiya, 28-year-old president
of Mamiya Commerce.  This is to be a secret marriage, which makes
no sense to me, save to give Enjoji an element of suspense to play
with.  It was one of several things in the series which I’ve found
unconvincing and/or unsettling.

Hokuto is an arrogant creep.  He’s cold and tyrannical.  On those
rare occasions when he tries to play the part of a loving husband,
his actions seem calculated and selfish.  When he refuses to accept
Chiwa’s resignation from his company - she’s been offered a job at
a start-up company where she would be valued - he crosses the line
from cold to utter asshat.  In doing so, Hokuto also diminishes my
regard for the guy who offered Chiwa a job.  He withdraws the offer
because of Hokuto’s objection.  I thought shojo manga was supposed
to appeal to female readers.

The series ponders if these strangers can find their way to a happy
marriage.  After reading the first two volumes, I realized I don’t
care.  Hokuto is an asshole and Chiwa needs to figuratively grow a
pair.  The only good reason for them to be married is to keep them
from making two other people unhappy.  I won’t be returning for the
third and subsequent volumes.

I continue to dig through the boxes of comic books, many years old,
loaned to me by a good friend.  Here are my quick comments on some
of those comics.

Conan: The Book of Thoth [Dark Horse; 2006] was an impressive four-
issue exploration of the life of Thoth-Amon, one of the Cimmerian’s
deadliest foes.  Written by Kurt Busiek and Len Wein with fantastic
art by Kelley Jones, each $4.99 issue had 40 story pages with the
final issue going to 42 story pages.  While these comics may have
been short on Conan, they were wonderfully creepy and told with a
lyrical darkness that served the story well.  The four issues were
collected in a 2006 trade paperback.

The lead story is the only new story in the issue.  It’s set in the
Scarlet Witch-created “House of M” reality in which mutants pretty
much rule the world.  As Captain Marvel, Carol Danvers was the most
popular super-hero in that altered world.  It’s a so-so side story
from a clunky event.

Next up was a reprint of the 1969 Captain Marvel #18 by Roy Thomas,
Gil Kane and John Buscema.  It’s the best story in the issue and
significant because it has the genesis of the super-powers Danvers
would later possess as Ms. Marvel.

That’s followed by Ms. Marvel #1 and #2 from 1977.  Created/written
by Gerry Conway with an assist from Carla Conway, the series always
struck me as an exercise in throwing everything against the wall to
see what sticks.  So we have awkward appearances by Jonah Jameson
and Mary Jane Watson.  The second issue ends on a cliffhanger, so
anyone reading it for the first time in 2006 would have to either
search for subsequent issues in the back-issue bins or buy a copy
of the Essential Ms. Marvel.  I’d recommend the latter because even
so-so Essential volumes are still cool.

The last reprinted story in this one-shot is by Chris Claremont and
Dave Cockrum.  It hails from Ms. Marvel #20 (1978) and is notable
for the introduction of the costume Carol Danvers wore for most of
her super-hero career.  It ends on a cliffhanger - that Essential
Ms. Marvel is looking better all the time - and it reminded me how
much I’ve disliked every costume Danvers has worn until recently.
If she had been a Barbie doll, she would have come with a stripper
pole and little dollar bills for Drunk Ken to stick in her costume.
I’m just saying.

Posted by Tony Isabella at 6:52 AM