THE SHADOW #77: TEMPLE OF CRIME 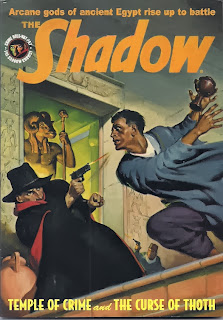 The man who knows where evil lurks walks like an Egyptian in The
Shadow #77: Temple of Crime and The Curse of Thoth [$14.95], which
was recently published by my friend Anthony Tollin’s Sanctum Books.
Both of these classic pulp tales were written by Walter B. Gibson,
writing as Maxwell Grant.

“Temple of Crime” was published in the November 15, 1941 issue of
The Shadow Magazine. From the back cover: Gods of Ancient Egypt
walk again when murder strikes within the Temple of Crime.

“The Curse of Thoth” ran in the magazine’s May 1946 issue.  From
the back cover:

A violated tomb and The Curse of Thoth pit the Shadow against an
ancient deity.

Ye Gods, but it looks like The Shadow will be up against some very
powerful foes in this double novel.

Adding to the Egyptian theme, Tollin includes Gibson’s radio script
for the Nick Carter adventure “Murder in the Crypt” or “Nick Carter
and the Jackal God.”  The script is illustrated by panels from the
comic-book adaptation of this story.

Naturally, there’s also a new historical essay by the knowledgeable
Will Murray.  What a deal.

Posted by Tony Isabella at 3:21 PM