THE SHADOW #78: THE CIRCLE OF DEATH 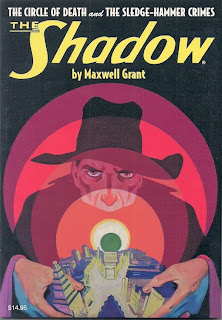 Recently published by Sanctum Books, The Shadow #78: The Circle of
Death and The Sledge-Hammer Crimes [$14.95] features two classic
novels of the Shadow by Walter B. Gibson, writing as Maxwell Grant.
“The Circle of Death” was published in the March 1, 1936 issue of
The Shadow Magazine. From the back cover:

“The Sledge-Hammer Crimes” comes from the magazine’s August 1, 1936
issue.  From the back cover:

The murder of a museum curator by an ancient Aztec stone hammer
triggers an inexplicable wave of crimes.

Also in this book: “Fuel for Murder,” a short Whisperer thriller by
Alan Hathway writing as Clifford Goodrich.  It was first published
in the May 15, 1940 edition of The Shadow Magazine.

Rounding out the book are the usual informative historical essays
by Will Murray and Anthony Tollin.

Posted by Tony Isabella at 3:16 PM