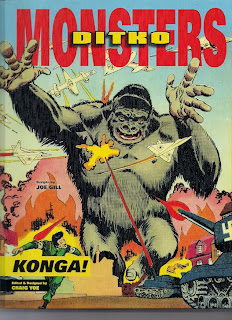 Reading Ditko Monsters: Konga [IDW; $34.99] was absolutely the most
fun I’ve had reading comic books this year.  Edited and designed by
Craig Yoe, this massive 328-page hardcover collects every issue of
Konga drawn by the legendary Steve Ditko, fifteen book-length tales
in all.  You might want to move back a few paces from your computer
screen because I’m going to start gushing soon.

Konga was a not-very-good 1961 British/American movie about a mad
scientist who turns a monkey into a murderous gorilla and then into
an even bigger murderous gorilla.  Michael Gough plays the science
guy and he would play Alfred in the first four Batman movies from
1989 on.  The giant ape stuff doesn’t happen until the end of the
movie, which does not warrant multiple viewings.

Charlton Comics writer Joe Gill adapted Konga for a 22-page comic
book drawn by Steve Ditko.  It’s mostly faithful to the movie save
that it omits the mad scientist’s lust for his beautiful and much
younger student.  The comic was published before the movie debuted
in the United States and was sold or given away at some theaters.
In this collection’s introductory material, Yoe describes some of
the other ideas suggested by the movie’s promotional team.

Konga #1 is an okay comic book.  Even though Konga dies at the end
of the movie and the comic book, another monkey is experimented on
and becomes the giant ape who would appear in 25 more Konga comic
books, all of them written by Joe Gill and fifteen of them drawn by
Ditko.  Within just a few issues, Gill and Ditko would make Konga
a thing of crazy brilliance.

Ditko’s work is terrific, almost as good as the work he did for
better-paying gigs like Amazing Spider-Man and “Doctor Strange” in
Strange Tales.  But Gill is rarely given the credit he deserves for
his Konga scripts.

Konga remembers being treated kindly by Sandra and Bob, who worked
with the mad scientist and, unlike in the movie, who lived to appear in
several issues of the comic book.  He longs for that kindness and
only fights when he is provoked.  A gentle and often goofy giant,
Konga is provoked by criminals, Nazis, Communists, aliens, an array
of comical would-be dictators and, naturally, other giant critters.
He fights to protect innocent humans, especially those who show
him kindness.

Konga contends with many serious threats to those innocent humans
and to the world, yet Gill often included a humorous slant to these
adventures.  Humorous?  Heck, many of these stories are laugh-out-
loud hilarious and Ditko goes all-in with the farcical flow of the
more wacky issues.  I’ve read these stories a dozen times over the
past half-century and they still make me grin with sheer delight.

Ditko Monsters: Konga is a treasure.  Buy a copy for yourself, then
buy a couple more copies for holiday gifts to the comics fans and
monster buffs in your life.

When Archie Comics stopped sending me copies of its comics, books
and digest, I looked at my budget and decided I was getting enough
enjoyment from their publications to buy most of them.  The notable
exceptions were Mega Man and Sonic the Hedgehog because I’ve never
been a fan of comic books based on video games.

Over the past month, I read Archie 1000 Page Comics Digest [$14.99]
and Archie 1000 Page Comics Extravaganza ($14.99), as well several
Archie double digests [$3.99, 160 pages] and double double digests
[$5.99, 320 pages].  Now those 1000 page comics digests deliver a
lot of stories for your fifteen bucks.  However, I now realize they
are comprised of stories from the recent double digests and double
digests.  So, despite how cool they look and feel, I’m dropping the
thousand-pagers.  The smaller-size digests suit me better, which is
not to say that the thicker editions aren’t some of the best if not
the best buys in comics.

Speaking of those smaller-size digests, Archie Double Digest #243
[October 2013] has a fun seven-page “Dotty and Ditto” by Katy Keene
creator Bill Woggon.  Dotty and her parrot Ditto are reading comic
books before they go to bed and, naturally, those comic books are
various Archie titles of the 1940s and 1950s: Archie, Black Hood,
Pep, Suzie and even Katy Keene.  In her subsequent dream/nightmare,
Dotty “meets” Super Duck, the Shield, Jughead, Archie, Wilbur and
others.  It’s an amusing and unusual story, especially if, like me,
you enjoy what I call “comics in the comics.”

Kudos and much appreciation to my friend Peter David for his long
and entertaining run on X-Factor from Marvel Comics.  Though I may
be hopelessly confused by Marvel’s numbering on this and too many
other titles, the Grand Comics Database tells me the just-concluded
series ran for 114 issues from January 2006 to November 2013...and
what a wild ride it has been.

The premise was terrific:

Founded by Jamie Madrox and staffed by a group of the best mutant
heroes around.  When superhumanity needs a detective agency, they
call on X-Factor Investigations.

My favorite stories were the more street-level cases, but, whether
the adventures were set in New York City or Hell dimensions or some
far alternate future, these characters kept me intrigued.  I can’t
think of too many other characters or titles that have managed that
in the past decade.

For the past year, David, mostly working with the terrific Leonard
Kirk as his penciller, has been bringing X-Factor to a conclusion.
The completions of the character journeys and the issues themselves
never seemed rushed.  They took some unexpected and downright weird
turns.  Some journeys ended in a more fitting manners than others,
but the overall conclusion was immensely satisfying.

Really good, satisfying endings are rare in a comics industry that
often simply continues unfinished business into the next title or
mini-series.  X-Factor rose above that.

A new life for Theresa Cassidy.  Unexpected happiness for Monet and
Darwin.  An uplifting path for Rahne.  Happiness and a final star
turn for my favorites, Jamie Madrox and Layla Miller.

Posted by Tony Isabella at 5:42 AM