THE SPIDER #2: THE DEVIL’S PAYMASTER 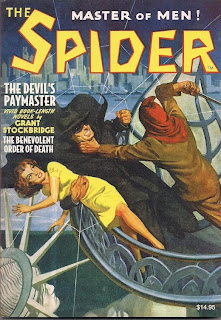 Recently published by Anthony Tollin’s Sanctum Books is The Spider
#2: The Devil’s Paymaster & The Benevolent Order of Death [$14.95].
The volume features two pulp magazine adventures of the “Master of
Men” by Norvell W. Page, writing as Grant Stockbridge.  Though the
two connected stories have been reprinted before, this is the first
time they have been collected in a single volume.

“The Devil’s Paymaster” was first published in the May 1941 issue
of The Spider. From the back cover:

The Devil’s Paymaster deals torturous radioactive death, and only
the Spider can restore honor to the Statue of Liberty.

“The Benevolent Order of Death” appeared in the June 1941 issue of
magazine.  From the back cover:

Nita infiltrates the supposedly patriotic Benevolent Order of
Americans, and a new Spider arises after Richard Wentworth is shot
in the back.

This volume’s extra features are extra special.  Will Murray’s “The
Web” discusses Spider supporting characters and the letters column
that ran in the magazine.  Then Anthony Tollin writes of faithful
fan Virginia “Nanek” Combs and how Norvell Page wrote a short story
for her.  That story tells of “A Certain Meeting” between Richard
Wentworth (The Spider) and Nita van Sloan.  The story, previously
published only in the 1978 Xenophile #40, is also reprinted in this
volume.

As with the other Sanctum Books series - Doc Savage, The Shadow
and others - these Spider adventures are entertaining journeys into
the heroic fiction of the pulp era.  They’re wonderfully made books
and I regularly despair that I might never get around to reading
them all.  But what I can do is let you know about the new releases
as they appear.  More Sanctum Books news is on the way.